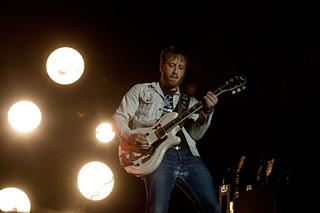 The first hour of the Akron, Ohio, garage-blues duo's set comprised two discrete parts, the first being a pretty typical rock gig in which singer-guitarist Dan Auerbach and drummer Patrick Carney, backed by a handful of supporting players, banged out a host of songs from their catalog of the past decade. First up was "Howlin' for You" and "Next Girl" off of 2010's Brothers, followed by the grubby, sensual guitar licks of "Dead and Gone" and "Money Maker" courtesy of last year's El Camino. Then, the stage went dark, and when the lights came back up, only Auerbach and Carney remained, treating the audience to a searing duet of raw, stripped-down rock reminiscent of the White Stripes' best live sets. The pair reached back to Rubber Factory (2004) and Magic Potion (2006) with "Girl Is On My Mind" and "Your Touch," delivered with sweaty give-it-to-me grit. Breaking out a vintage National steel guitar, Auerbach summoned the rest of the band back onstage midway through "Little Black Submarines." From there they resumed their crunchy Zeppelin bombast, complete with an enormous disco ball that lit up the night with multicolored sparkles during "Everlasting Light," quite possibly rendering it the most expensive song on the set list. 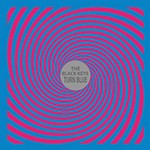 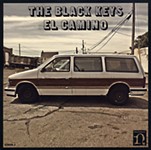 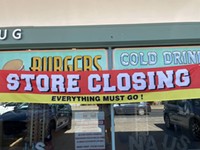