ACL Interview: The War on Drugs 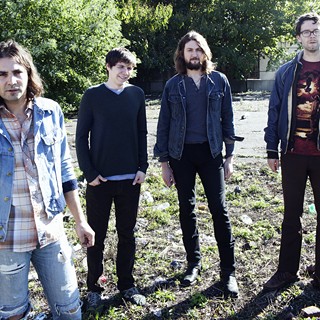 There's a running joke in the War on Drugs that no matter how good a take is in the studio, it's likely not going to make it onto the album. That's simply how Adam Granduciel operates – approaching things from alternate angles, letting it sit, then beginning anew.

"I'm always searching for a feeling," offers Granduciel from his home in Philadelphia. "I'm still undisciplined in the fact that I'm not writing anything down. I just get these lines and start piecing it together and then going back.

"I work off of my early demos. I'll keep adding on top of that, but I usually gravitate towards whatever that original idea was. It's the little things that you can't really pick out that make the music move the way it does."

It's a laborious process, but there's no disputing the results. The War on Drugs' latest, last year's Slave Ambient (Secretly Canadian), filters classic FM Americana through the hypnotic, forward trajectory of Can and Kraftwerk. As many have noted, the album could be considered a companion piece to Kurt Vile's Smoke Ring For My Halo in much the same way Wilco's A.M. parallels Son Volt's Trace as opposing results of the Uncle Tupelo demise. Granduciel and Vile recorded together for years and still do on occasion.

"I try to take whatever I can from the songs I grew up listening to, these vibed-out pop numbers, and make them my own in some weird way," says Granduciel. "You can't really take it for granted that people listen to your music. I want to write songs that are on par, at least in my mind, with the ones I've loved for my whole life and that will be around forever."