No band came into South by Southwest this year with more hype than Alabama Shakes. Considering that the quartet had released only a single EP, its sudden ascent to must-see status could've precipitated a massive backlash.

"I think if we got sucked into the hype as much as everybody else did, then it could be intimidating, but we try not to think about that," acknowledges drummer Steve Johnson from the band's hometown in Athens, Alabama. "I won't say that it doesn't get intimidating or that you don't think about it, because you do.

"But you try not to dwell on it, because then you start overthinking, and that's not what you want."

Not overthinking it may be key to the band's success. Debut LP Boys & Girls (ATO) lived up to the band's promise with a raw Southern soul that swaggers behind Brittany Howard's gritty and sincere howl. The album cuts a classic Muscle Shoals sound with a new urgent intensity.

Onstage, the band unloads a powerful groove, led by Heath Fogg's Stax-inspired riffs and rooted rhythms of Zac Cockrell's bass and Johnson's drums, with touring keyboardist Ben Tanner filling out the Southern-rolled sound. Shows have captivated even Jack White, who produced a live 7-inch of the band at his Third Man Records in Nashville.

"You find small ways of changing the songs and making them better live," notes Johnson. "We don't ponder production as much as we do just playing a show where the music sounds as good if not better than the album.

"I think that's one element to our shows that a lot of people like: There are no gimmicks." 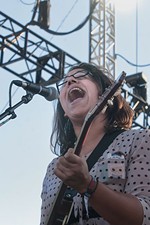