She's translating a song called "Shrill/Le Pacte du Loup." Like she does for most Crooked Bangs songs, Ginestra sings it in French. Whatever the topic, her bandmates will just have to take her word for it. She's the only member who knows the language.

Ginestra, who also plays bass, seems like a well-adjusted human being despite an affinity for singing about blood pacts, winged demons, and wolves gnashing iron teeth. The lyrical horror, sung in a low, minor howl, matches the local trio's dark wave sound forged by primary composer Samantha Wendel, whose guitar progressions come from being self-taught and well-practiced.

"I don't know any chords, so I make them up, and if it sounds good I go with it," shrugs the guitarist.

When drummer Phillip Gonzalez joined Crooked Bangs late last year, his urgent tempos turned their three-minute epics into tight two-and-a-half-minute blasts. At less than a year old, Crooked Bangs already polished off a sonically durable new LP – its second release – on new local label Western Medical Records from producer Mike McCarthy. Known locally for producing the earliest work of ... And You Will Know Us by the Trail of Dead and Spoon, plus Patty Griffin and Heartless Bastards more recently, McCarthy's fed up with the music industry.

"In the last few years, the music business has really fallen on its face, and I don't like being involved in it anymore," he grouses. "It's a fucking pain in the ass. The people who are investing the money don't know what they're looking for, and the budgets have dwindled."

Tired of the bullshit, McCarthy disassociated himself from the machine in March, resolving to get back to doing what he liked: recording bands of his own volition. Crooked Bangs and sole labelmates Feral Future, a female-fronted wrecking ball of frictional punk, so grabbed McCarthy's attention with their live performances that he sought to record them. Impressed with the outcome, McCarthy captained CB's vinyl release, using his "New Deal" approach: no contracts, and any profit made is split like he's a band member.

"The greatest thing we experienced overall in the studio was being able to find our sound," says Gonzalez about McCarthy's choice vintage gear and expertise as a producer and engineer, which helped the band make a debut that's unusually focused and professional sounding. "It would have been a completely different record without him." 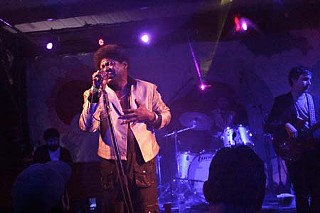 Charles Bradley sings through the rain at UtopiaFest. (Photo by Joshua Logan)

As for the label, McCarthy looks to take it slow, waiting for other bands to blow his mind. Presently, he's comfortable working with relatively unknown groups like Crooked Bangs and Feral Future.

"I think they're great," he states. "I don't know if everyone else does, but I don't think people gave a shit when we were recording Spoon or TOD in 1999 or 2000 either."

I talked my friend out of taking a jacket to UtopiaFest. "It never really rains in Texas," I explained as our vessel, a modified 1985 Dodge Falcon supervan, pulled up. "If it does, we should be thankful." He'd hate me later.

By the time we realized the Falcon's windshield wipers didn't work, we were spinning down Hill Country roads, half-blinded by the downpour. "Park where you get stuck, that's what I always say," the driver proclaimed as we skidded sideways in the muddy festival grounds, three hours from home. While a folk rock band called Houndmouth played, we shared tents, teepees, and umbrellas with new friends, the vast majority of whom were Austinites. A rare Houstonian braved the showers in front of the stage, proclaiming, "The rain adds a level of beauty. We don't have comfort. All we have to enjoy is this music."

An organizer described UtopiaFest as "designed for the laid-back individual." When the rain ruined one stage, they moved the artists to the other, ripped up the schedule and shrugged, "This is the country – we can play all night!" The brutal mud swallowing shoes and causing messy faceplants couldn't dampen the easygoing vibe.

Dr. Dog impressed with a colorful performance that drew Friday's largest crowd, but the night truly belonged to the "black swan," the "original victim of love," the "screaming eagle of soul" – one Charles Bradley. Tears streamed through the heavy wrinkles of the singer's face during "Heartaches and Pain" and through much of his soul-stirring set. The onetime James Brown impersonator sang about love and death with supernatural emotion that left some crowd members choked up.

"For you to come out in the rain and show me this much love, I just don't know what to say. I'm gonna come out there and get wet with you after this," cried the singer. He fulfilled his promise at the end of his unforgettable set, dropping down into the ankle-deep mud. "I love you!" he shouted.

Feeling like sewer rats in the winter, we decided to hit it home at 2am, but the Falcon's wheels, up to the lugs in mud, spun freely. That no longer mattered when reports came in that Dr. Dog's tour bus had gotten stuck on the road out, blocking all traffic. In the morning drizzle, our resourceful uses of hay, wooden boards, and manpower failed to get the Falcon moving, leaving us stuck until five good ol' boys with a 4x4 UTV shoved us out.

I heard the next day was beautiful, but I don't regret going to UtopiaFest on Friday. I'll soon forget my runny nose and the mud under my toenails, but I'll always remember Charles Bradley.

› Doug Guller, owner of the national breastaurant chain Bikinis, was so "bummed" to hear that the Scoot Inn's prospective new owner was ending live music there that he looked up the broker and called to see if the deal was done. Just his luck. It had fallen apart the night before due to financing issues. Guller bought the Scoot Inn and signed a new 15-year lease. "I'd seen shows there and thought it was a unique place for live music," the entrepreneur explained. "I also own the Parish and Beale Street Tavern, so I'm looking to expand our footprint." Worried he'll turn the longstanding dive into a sports bar with beer-pong tables outside? That's not the plan. "We're just going to give it a little love inside and out," he says. "The bathrooms will be functional and the AC [will work] inside." He does plan on upgrading the sound systems inside and hauling his Zorro food trailer down for permanent residency. Travis Newman, head of the Parish's booking team, will be programming bands four or five nights a week beginning Saturday, Nov. 10.

› James Minor has been made the general manager of South by Southwest's music staff in the wake of longtime Creative Director Brent Grulke's death. "Whenever someone especially valuable at SXSW leaves, I always say, 'No one is ever replaced. We can only restructure,'" notes Festival co-founder Roland Swenson. Minor, 38, boasts a diverse résumé in the local music world, booking Emo's, managing indie pop band Voxtrot, working at the old 33 Degrees record store, and tour-managing bands. He'll report to SXSW Director and Controller Darin Klein.

› Grupo Fantasma continues recording a follow-up to its Grammy-winning El Existential. Austin's Latin-funk big band did a week at Public Hi-Fi, with Jim Eno engineering and Los Lobos' Steve Berlin producing. "We're Los Lobos fans, but Steve came to mind as someone with decades of experience, an understanding of music from around the world, and an ability to marry those worlds successfully," said guitarist and composer Adrian Quesada. Grupo Fantasma backs Wu-Tang sensei GZA Friday at the Mohawk. 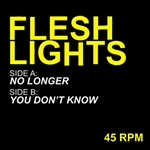 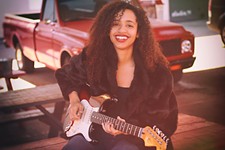