Playback: Coolest Board in Town 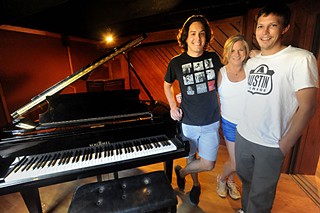 Will Bridges, Lisa Fletcher and T. Murphey at one of Arlyn's 'boards (Photo by John Anderson)

Longtime Arlyn Studios owners Freddy and Lisa Fletcher are partnering with a younger generation of Austin entrepreneurs to revamp the famed recording facility.

Freddy Fletcher built the studio in 1984 and named it for his old man Arlyn "Bud" Fletcher, the fiddle-playing bandleader who launched the careers of Bobbie Nelson and her little brother Willie. Just out of sight from the trendy storefronts of South Congress Avenue, the studio occupies part of the building that used to be the Austin Opera House, a concert hall and outlaw country headquarters that Willie owned with Direct Events owner Tim O'Connor. Arlyn's sound booths have harbored the likes of Frank Sinatra, Robert Plant, Doug Sahm, Kris Kristofferson, and wouldn't you guess, Willie Nelson.

A few landmark albums were cut there too. Sublime's six-times-platinum swan song was overdubbed and mixed at Arlyn, as were breakouts from the Butthole Surfers (Electriclarryland) and Meat Puppets (Too High To Die). The hits stopped around 2002, when the Fletchers began booking Arlyn exclusively to MediaTech as an audio engineering school and focused recording projects into sister studio Pedernales.

"I bugged Freddy for four years – that's all it took," recalls new Arlyn partner Will Bridges, 30, an Austin native who co-owns Downtown barbecue joint and music venue Lamberts. "I told him that if he ever reopened Arlyn as a commercial recording studio, he should let me run it.

"I think he said something like, 'Talk to me in a few years.'"

Bridges talked his way into a three-way partnership with the Fletchers and his friend T. Murphey, son of the departed Tonky Murphey, an important link between the music and business worlds during Austin's blues era. Prepping an Aryln renaissance, the team is consolidating equipment and clientele while making major upgrades that include uncovering the studio's original cedar beams, expanding one of the cutting rooms, and adding a second studio to cater to post-production for film and video.

The best renovation, though, probably originated in some record producer's wet dream. The centerpiece of Arlyn's control room was an API recording console – a top-shelf vintage British soundboard. Pedernales had a rare Neve console, one of just four in existence.

"We upped the ante," glows Bridges. "Both the Neve and the API are in Dallas right now getting married into a 21-foot superconsole with matching meter bridge, matching faders, and a custom center section designed by Fred Hill."

"It'll probably be the coolest board in town," Butthole Surfers guitarist and Sublime producer Paul Leary says. "To me, the ultimate is to record on a Neve and mix on an API. It's fairly common practice to put two vintage boards together, but it's usually two of the same kind. I'd love to work on a board like that."

Speaking of luxury gear, the studio's courtesy car is Stevie Ray Vaughan's '78 El Camino fitted with a 351 police special engine. It was handed down to Murphey from family friend Jimmie Vaughan. Not a bad ride for a between-song beer run.

"We want to take all the memories and experiences of Arlyn – and even some of that Opera House fairy dust – and bring it up to present day standards to make this a world class studio that's also a hub for local creativity," beams Bridges. "If there's one thing important to all of us, it's this sense of Austin community. We want this to be infrastructure to elevate the Austin music industry."

Bridges says Arlyn will open in mid to late November.

The Devil and Conor Oberst

Conor Oberst needed an opener for his show Tuesday at the Bass Concert Hall, so he flipped through the personal heroes file of his mental Rolodex. "Can we get Daniel Johnston?" he asked his bookers. "I knew it was kind of a long shot." To the delight of Mr. Bright Eyes, a fan since the late Nineties when he got the Waller pop savant's Hi, How Are You?, 1990, and Fun albums, Johnston accepted. "There's a real honest and genuine quality to what he does," relays by phone Oberst, drawn to the melodies and poetry inherent in the work of Johnston, who's famously lived with mental illness. "I think he's free of the artistic egotism that most songwriters, including myself, have because he's coming from a very pure perspective." Oberst, who cut Johnston's "Devil Town" for The Late Great Daniel Johnston comp in 2004, says he considers his guest of honor to be a forefather of the cassette tape/lo-fi genre of singer-songwriters that influenced his own output. As of press time there are no plans for an onstage collaboration between the two musicians, who have only met once previously – a decade ago at a club show in Atlanta – but Playback did its best to nudge it into manifestation.

› "He's looking for that hit in heaven," Joe King Carrasco said of his late friend Johnny "J.P." Perez from the stage of the Continental Club on Friday. Perez, best known as the drummer of the Sir Douglas Quintet, died last Tuesday in California. "I woke up this morning really missing him," Carrasco told me earlier that day. The two co-wrote stacks of songs, including "Buena," "Betty's World," "Baby Let's Go to Mexico," and "Pachuco Hop," which Manu Chao famously covered. Carrasco says writing with Perez was like, "Standing next to a little magic music machine that dispensed constant lyrics and never stopped." Perez, who played on Sir Doug hits "Mendocino" and "She's About a Mover," was a force all right. "I thought he'd be here forever," laments Carrasco. "He seemed like he was eternal."

› There are less than 300 tickets left for UtopiaFest (www.utopiafest.com). The fourth annual music campout, transpiring Sept. 27-30 in Utopia, Texas, caps attendance at 1,800 to keep it mellow. Imagine seeing a sold-out Stubb's show in an area the size of Zilker Park. With no overlapping music and the freedom to BYOB, it stands out from the other fall festivals. This year's lineup includes Toubab Krewe, Charles Bradley, Dr. Dog, White Denim, Victor Wooten, Ray Wylie Hubbard, and Ben Kweller. If camping ain't your pleasure, nearby cabins are available.

› Tom Kodiak, guitarist for local punk band the Hex Dispensers, has funded a barbecue trailer with help from Kickstarter. Micklethwait Craft Meats will specialize in Hill Country fare made from scratch. Meanwhile, Hex Dispensers singer Alex Cuervo recently launched a website to promote his soundtrack business (www.alexcuervo.net). "I'm eager to sink my teeth into some cool indie games or small films – especially science fiction and horror-themed stuff," he says. Amid these ambitious pursuits, the band has found time for a show: Thu., Sept. 27, at Trailer Space Records. 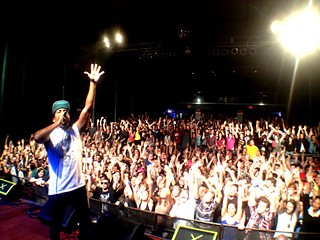 When Awolnation's Hayden Scott broke his bass drum head during a South by Southwest gig at the Parish in 2010, local rapper Zeale took the mic and led a seemingly infinite freestyle while it was replaced. As thousands of YouTube viewers can attest, he killed it. "Ever since then, they've been really cool with me," the MC reflects. Along with his DJ, Rockwell 9000, and drummer, Gibran Nassif, Zeale's hit the road with Awolnation and Imagine Dragons. Calling in from a spacious 18-passenger van headed toward Maine, Zeale remained humble about opening for bands with heavy MTV and commercial radio rotation: "This is going to be good exposure, and all of us are very excited about that, but really, we look at every set like we gotta go out there and kill this show." The native Austinite reports that he's been playing to packed houses with material from his early summer release Wake Hell or Make Peace, which features an Awolnation collaboration on "Black Mr. Rogers." The tour hits Emo's East on Oct. 18 for a sold-out show. 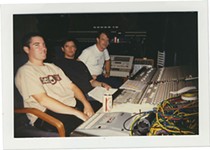 25 Years Ago, Sublime Arrived in Austin and Cut One of the Decade's Biggest Albums
Local producer Paul Leary put some Austin in the Long Beach surf/punk/dub trio's mix 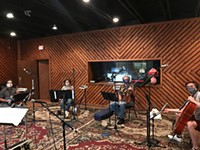