Blame it on Treme.

I'd canceled HBO after The Sopranos ended, but got a tantalizing look at Treme while visiting a friend in Houston. A conversation between a New Orleans horn player and his New York peers, and their slick generalizations about jazz lingered in my thoughts because it was so real. There was something so righteous about the conversation that I lusted for more.

Treme grabbed me from the first episode's last scene, where the Mardi Gras Indians' Big Chief parades out of the darkness of the Katrina-emptied neighborhood wearing his headdress and banging his tambourine. His calls to the vanished tribes echo among the flood-vacated houses.

It was a cry of life – a call for help. A reminder that what came before cannot be washed away by flood waters or tears, but it can be lost, forgotten if the memory isn't kept alive. The more I watched of Treme, the more homesick I got for the New Orleans I grew up in, the one that no longer exists except in music. And memory.

Lessons like that resonate through the history of music, and maybe more so these days. Texas music carries its own stories, branded with bravado and gumption, and within that emerged Austin, with its curated image as the live music capital of the world. I moved here in 1973 at age 19 because of that lure.

When the email inquiry arrived this summer from Chad Tracy at UT Informal Classes amid a cluster of press releases and greetings from young publicists asking if I'd heard of Jimmie Vaughan, I read it twice.

"[I] was wondering if you would be interested in teaching a class on the history of Austin music ..."

How the Beatles Destroyed Rock & Roll

There were a thousand reasons to say yes, but the most recent was How the Beatles Destroyed Rock 'N' Roll, a rather luridly-titled book that only vaguely indicts the Fab Four. Author Elijah Wald takes great care in detailing how concept albums like Sgt. Pepper's Lonely Hearts Club Band altered the pace of rock & roll.

Without getting too bogged down in semantics, Wald also correctly notes that critical writing tends to not just ignore but dismiss and/or diminish the masses. The twain met in Elvis Presley and the Beatles, but usually they do not.

My own youthful tastes were an adolescent combination of pop and pap. I never wanted to tell people what or how to listen to music. I wanted to share the music that moved me. I've written half jokingly about suburban white girl angst, but it was truly difficult as a teenage girl in the late Sixties to find anyone to talk to about the music I loved. I didn't want to play it. I wanted to live it – to reside in the half-world of teenage dreams that rock & roll forever soundtracks. Learning guitar wasn't the answer, but reading about people who played guitars thrilled me.

In Rolling Stone's heyday as the voice of the counterculture, it published encyclopedic histories of rock & roll, brimming with gorgeous, mostly black-and-white photography. Yet they were skewed in an odd way that allowed the magazine's founder Jann Wenner to recognize the value of a rogue player like Doug Sahm by putting him on the cover not once but twice between 1968 and 1971, but marginalize him out of the Rock & Roll Hall of Fame, an organization Wenner exerts tremendous influence over.

Call it Lone Star jingoism, therefore, that when Wald points out Buddy Holly & the Crickets predated the Beatles (and Beach Boys) as a template for bands writing and recording their own music, I cheered. When one factors in regional music, this state's rich underpinnings and melting pot culture reveal themselves as existing before the British Invasion and psychedelia, general reference points for modern rock. Apply those views to Texas music and start waltzing across the state.

All have a place in the past. All have stories worth telling.

Damn Bill Narum for not being alive today.

A cultural visionary whose sandstone style defined ZZ Top's classic album covers, Narum, who died in 2009 (see "Saw It on the X," Apr. 1, 2005), also propagated an alternate view of the founding of Austin. In his telling, the first two businesses were a music hall and printing press. The two men that had the press disagreed and split up. One moved across the street and started another press. Therefore, the first dynamic in Austin, Narum gleefully announced, was music and an alternative press.

You can trace New Year's Eve celebrations locally at least as far back as December 31, 1842. That was the night that Austin – languishing in population at the time – celebrated the end of the Archives War with a big bang. Sam Houston had sent the Texas Rangers to collect the state's records before Christmas, determined to make the town named for him the capital of Texas instead of the settlement here on the Colorado. Fortunately, a sharp-eyed boardinghouse owner named Angelina Eberly spotted the furtive action and ran outside to light a six-pound cannon, alerting the citizens of the theft.

Townspeople chased the Rangers into Williamson County before the documents were surrendered back. That New Year's Eve, Austin celebrated as never before. The accordion as we know it was in use by then, and when German immigrants settled in Mexico and Texas, the European instrument was co-opted with marvelous results, all the way to Louisiana. The assimilation of the accordion into the disparate sounds of the Southwest is a perfect example of regionalism.

"Something happened in Texas and Okla­homa where people forgot the barriers between blues and jazz and secular music and Tin Pan Alley and everything else," opined primal folkie Geoff Muldaur in 2010.

"The Texas musician seems to have more things in his kit than others have. When you throw this stuff to the English blues players, they don't know what to do with it ... Blind Willie Johnson, Lightnin' [Hop­kins], Mance Lipscomb ... Texas can claim most of Leadbelly. The Delta thing was more limited musically. It had great geniuses involved in it, but it wasn't as structured and deep musically as Texas."

Muldaur's acute observations still ring true. I can't wait to pass them on. 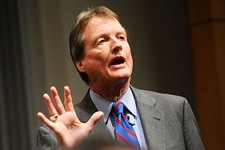 'A' Is for Axed: UT Chops Cactus, Cuts Classes
What will the loss of the Cactus Cafe and informal classes mean to the UT community?