Playback: Cheer Up Charlie's Sounds Off

The Rashomon view of Cheer Up Charlie's

Cheer Up Charlie's has been boisterous about its plans to appeal the noise permit restricting the venue's hours of outdoor music to 8pm on weekdays and 10pm on the weekends. Feeling let down by the city, they've turned to the community for support by speaking out in the media and circulating petitions. All the attention raises a central question perhaps underlying the whole episode: Is this the first shot in an approaching battle between residents and music venues on the Eastside? Don Pitts, music program manager for the city of Austin, says no.

"I think that this is a completely isolated incident," he states.

Cheer Up Charlie's' problems, explains Pitts, are the result of their repeated breaking of the outdoor music curfew. Regular cutoff times for outdoor music venues are 10:30pm during the week, 11pm on Thursdays, and midnight on Fridays and Saturdays. Because Cheer Up Charlie's' outdoor speakers are within 600 feet of property zoned and used as residential, the bar is limited to earlier hours. By Austin city code, the Music Office is unable to give them an extension without an agreement with their neighbors – and at this point, a neighborhood agreement is the only option for Cheer Up Charlie's to get that extension.

Pitts estimates some 15 area venues like CUC were affected when the code was rewritten last February, but all the others have come to an agreement with their neighbors about extended hours. That sort of treaty is problematic for CUC, as two neighbors, John Plyler and Susan Benz, both members of neighborhood groups, have been outspoken against any sort of amplified sounds coming from the bar after cutoff times.

Cheer Up Charlie's owner Tamara Hoover and booker/sound manager Maggie Lea contend they've only exceeded cutoff times with DJs and prerecorded music at lower decibels, which is an issue they'd like to raise awareness about. They say that there should be a distinction in city codes between live performances and P.A. music. They argue that decibel levels, not just cutoff times, should factor into outdoor music permits. Pitts disagrees, saying cutoff times are integral for responsible outdoor sound and that, in his experience, DJs earn just as many noise complaints as bands do. CUC has spent thousands of dollars on a band shell and new speakers.

"I don't see us being a sustainable music venue with these hours," complains Lea. "And since live music also just so happens to be the brand of the bar, we can't be the Eastside bar we want to be without our live music outdoors."

Outdoor music is essential to CUC because its patio capacity is six times the meager 49-person capacity of the bar's interior. Between neighbors who want to see the venue stripped of its outdoor music permit altogether, the Music Office that views them as repeat sound offenders, and the legions of patrons showing support for the three-year-old club, there's little agreement.

Regardless of whether this is representative of a larger issue – backlash on the Eastside's entertainment free-for-all (CUC hosts Le Tigre's JD Samson on Sunday, 3-10pm) – this debate is important because Cheer Up Charlie's is a viable music venue that, through quality booking and execution, has become a key platform for new bands to gain exposure. Without their outside stage, that status is jeopardized.

Along with knocking back Lone Stars and standing in line to eat barbecue, Anthony Bourdain accomplished something else characteristically Austin when he rolled through town in late March. He caught a Golden Boys show. After watching the local rock & rollers play a set at Trailer Space Records, the excursionist chef joined the band for dinner and drinks at the Texas Chili Parlor. "You'd imagine he'd be jaded," says Golden Boy Matt Hoopengardner of the Travel Channel host. "I asked him if gets burned out and road-worn and he looked me in the eye and said, 'I have the best job in the world and I'm grateful for it.'" Hard-buzzing local trio Ume will also be featured on the series premiere of No Reservations on Monday, Sept. 3, at 8pm. The Golden Boys get in the van on Sept. 18 for an eastbound tour culminating at Goner Fest in Memphis where they play direct support for reformed garage punk idols Oblivians. In other television-related news, preview the upcoming season of Austin City Limits Thursday, Sept. 6 at Republic Square Park. The free event features the hourlong Radiohead episode and other highlights from the show's 38th season.

Not so tall from this angle: Kristian Matsson in KUT's new studio 1A

Public radio favorite KUT is adding an all-music station to the local dial. Beginning this fall, KUT 90.5FM will be entirely news and information, while KUTX 98.9 goes round-the-clock with music. "KUT does two things really, really well," says station Director Stewart Vanderwilt. "We provide a news service that's local, national, and international, and we provide a particular take on the Austin music experience. There's not enough room in the day to do as much as we want in both of those arenas." KUTX will allow deeper exploration into the Austin music scene from the station's new state-of-the-art headquarters, which now houses the frequency's upgraded Studio 1A, where afternoon jock and Chronicle scribe Jay Trachtenberg hosted Swedish folkie the Tallest Man On Earth for a broadcast performance on Monday before his concert at the Paramount Theatre the next night. The ultimate goal of this addition is to double the station's impact within the community. If you want news, count on KUT. If you want music, turn on KUTX. "The consistency of those two things will lift both," says Vanderwilt.

› GrulkeFest, celebrating the life and impact on the Austin music scene of South by Southwest's late Creative Director Brent Grulke, takes place at the Moody Theater Sept. 8 with performances by a legion of locals: Fastball, Doctors' Mob, True Believers, the Wannabes, Sixteen Deluxe, the Reivers, Glass Eye, the Wild Seeds and more. "These are all bands Brent had something to do with, either directly – as sound man, road manager, coach – or indirectly," says Wild Seeds frontman Michael Hall. All proceeds from the concert will go to an educational fund for Grulke's seven-year-old son Graham.

› "We were really good at being intuitive and finding what a band was looking for," reflects Mike Vasquez about Austin's Sweatbox Studios. Vasquez left last weekend, trading his legendary local recording studio for life in Portland, Ore., and a job fixing wind turbines. Since 1993, Sweatbox recorded around 2,000 bands big and small at affordable rates. His favorite session: the Mooney Suzuki's 2000 debut, People Get Ready. For Vasquez, he's departing at the scene's peak. "It's better than it's ever been in terms of new quality bands, energy, and attitude," he beamed. "In the last year I've worked on more great records in one burst than I ever have before. I feel like I'm going out at the apex." Vasquez plans on using his windmill money to build a custom studio in his new home city.

› At press time, the sale of the Scoot Inn hadn't been finalized. In the proposed deal, Kevin "Kumbala" Crutchfield and James Stockbauer will sell their Eastside bar to Casino el Camino owner Paul Eighmey. Whether it's the last night of music or not depends on the swiftness of the sale, but the Scoot's official swan song will be this Friday with Hello Wheels (10pm) and Sons of Fathers (11pm) outside, and El Pathos (12mid) and the Hickoids (1am) inside. Kumbala stated that while outdoor sound issues were a minor concern for the venue, the main factor in selling was that the bar was losing money. Co-owner Stockbauer is opening a new bar on West Campus called Freedmen's, which isn't likely to be live-music oriented. Eighmey didn't return calls for comment on his vision for the new Scoot Inn, but Michael Corcoran reported last week that he wasn't planning on operating it as a music venue. 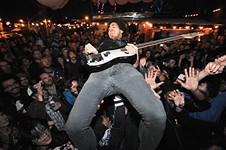