Dikes of Holland are blowing up

It's the Fifth of July at Trailer Space Records, and nobody in Dikes of Holland can find bandmember Phillip Dunne.

They just saw him, but the crowded lot outside the Eastside in-store haven, which today boasts a four-band bill, shows no sign of the swoop-haired guitarist and drummer. The four other members in Dikes of Holland don't seem concerned.

Perched on the bench outside Trailer Space, they drink Lone Stars and Pabst tallboys and groan about hangovers. They light bottle rockets and TNT Red Devils, while Liz Herrera, the band's singer, laughs and claps and cheers on every move. Eventually guitarist/bassist Trey Reimer tracks down Dunne.

"Let's all throw fireworks at Phil!" Herrera exclaims, cocking a Red Devil behind her head like she's about to take part in an egg toss. Her boyfriend and bandmate Chris Stephenson grabs his lighter and tells her to chuck it right away. The Red Devil detonates midway between Herrera and Dunne.

She throws that one at the hood of a blue Honda.

"Let's light fireworks onstage!" shouts the diminutive troublemaker, scurrying inside with two of the band. Within minutes, the back of the shop fills with smoke and fans take to their shirtsleeves for cover.

"Awww man, you should've seen it!" she brags with a kid-on-Christmas grin.

By now, the last clip of Red Devils has been passed out and emptied into a plastic grocery bag, and the Dikes see which member can incite the funniest pop. John Paul Bohon, also guitar and bass in the group's fiery instrumental game of Duck, Duck, Goose, skids one across the concrete toward Rosewood Avenue. Herrera lights hers and drops it into the middle of 12 congregated feet. Everyone jumps back, but Herrera just laughs.

Get in the Van

Trailer Space sells records, of course, but more importantly, it's the Austin indie scene's social club. Located on the corner of Rosewood and Angelina, the BYOB shop's dizzying weekly lineups haven't hosted the Dikes of Holland in over a year, but the band still considers it a second nest.

"[Store owner Spot Long] is usually the one setting off fireworks while bands are playing," Herrera reveals. "It's a carefree place where we're always welcome. It's home."

Tonight, the Dikes are hanging out there alongside members of the Golden Boys, Church Shoes, and Coma in Algiers. Long lines up shots behind the counter and leads overlapping conversations about Mexican restaurants, the Chronicle's editorial staff, and the rowdiest live band in town.

"You want to know what I love about Dikes of Holland?," asks Long. "Dikes of Holland play two or three times a week, six to eight times a month. Every show, the Dikes always bring it. It's always fresh, and there's always something different."

In truth, Dikes of Holland has brought it since 2008, when Stephenson, Bohon, and Reimer parted with instrumental noise-rock quartet Fire vs. Extinguisher and hooked up with Dunne, the band's only native Austinite. A year later, Herrera started singing on Stephenson's songs.

"Eventually, Trey said that I should sing with him and then one of my songs got onto the [first] record," Herrera remembers. "I remember JP one day say saying, 'You're in the band now? What?'"

"It just happened," injects Bohon. "We went out on tour and it just gelled. That's the ultimate test: if it wasn't going to work, we were going to find out in the van."

"Now it's always really good or really bad," Herrera levels. "It probably depends on how trashed I am. I feel like the guys can always play better when they're drunk. I just get drunk and slur."

Liz Herrera has spent the past three years as the unquantifiable spark in the Dikes of Holland. She's "the enigmatic front person," Long reminds her on her way out of Trailer Space. She's the only member of Dikes of Holland who jumps off the kick drum, wears a banana suit, or ... just name it and it's likely she's tried it onstage with the band.

Then there's her hair.

On the day we meet, it's pink. In August, it goes bright yellow. Since the beginning of the year, it's switched from black to blue to yellow to white. It's without question the most outlandish characteristic for a band that otherwise carries itself with hardly any flair for the preposterous or pronounced.

That's yielded two albums, a self-titled debut (see "Texas Platters," Nov. 26. 2010), and this month's Braindead USA (view more "Texas Platters," Aug. 17), plus a wealth of double-time material that will set fire to any stage they play. They're the preeminent live band in Austin today, a short-fused explosion paying no mind to whether it's a packed South by Southwest showcase or an aftershow inside at Mohawk for a handful of bleary fans.

"It feels good to just fucking plug in and play as loud as you can," says Stephenson. "We know it's always gonna be a sweaty mess afterward either way."

"Sometimes I won't be drinking, and people will jump in front of me like, 'Whoa, you're not wasted?' I do have a job, you know? But they're always telling me I'm so crazy every time they see me. I'm flattered people know who I am."

Balls to the Wall

Dikes of Holland call the band their job, but in truth, it's currently only a chief moneymaker for one bandmember. Bohon assembles microphones and parts for Wunder Audio, while Reimer works as a medical technician who "cleans AIDS off of sharp knives." Stephenson and Herrera work the service industry, the latter slave to 7am wake-up calls and the former admitting that he once got written up by his employer for taking a bite out of a french fry.

"That night was one of the best shows I've ever played too," says Stephenson. "It was at the Mohawk after I'd gotten written up for something so small. It pissed me off so bad that I just went off at that show. I've never played so well as I did that night."

"We're all divorced," Herrera sighs. "We're all divorced from life, and then we'll get together and form this happy marriage. Everybody else has these other things going on, like work or whatever – your normal life. Which is kind of lame. People work their jobs all fucking year long and have a week or two of vacation. We're about to go on tour for a month!"

Herrera wants little else out of the Dikes of Holland anyway. Except ...

"My only goal in this band is to see everybody naked," she allows close to 2am. "That's why I tour with four dudes. I just want to see their balls." 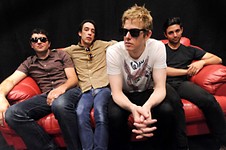 Playback: Fit To Perform
Divine Fits debut at Beerland, Willie hops the Railroad, and Ume gets a call from Perry Farrell.