Divine Fits, the duo's new band with New Bomb Turks drummer Sam Brown, was announced in May, weeks after the demise of Handsome Furs, Boeckner's electro-punk project with his wife Alexei Perry. The timing, the Spoon leader insists, was coincidental, but his new partner in crime suggests otherwise.

"Hanging out with Britt and working on this record, that's what I had to hang on to," states Boeckner, best known for his work with Montreal's Wolf Parade. "I don't really know what I would have done if I hadn't been making this record and had friends around me. There was a lot of mutual support, emotionally I think."

The epitome of cool under pressure, Daniel's more guarded about his intentions in our 30-minute phoner, chalking up the effort to mutual admiration and a desire to try something new.

"It'd been something in the back of my mind for a while," he offers.

There's more at work than he lets on.

After cracking Bill-board's Top 10 with the vintage-pop perfection of 2007's Ga Ga Ga Ga Ga, Spoon opted out of using longtime producer Mike McCarthy for 2010's self-produced Transference, the Austin institution's most polarizing/provocative work in a decade. Then Daniel, now 41, moved to Los Angeles, putting Spoon on the back burner and digging back into old AC/DC.

"I've got at least every Bon Scott record committed to memory," he remarks.

Far more telling is his new group's bold debut, A Thing Called Divine Fits, a compelling crossfire of Handsome Furs' sexual tension and Spoon's jaded post-punk precision. It sounds like an act of desperation, cut with raw urgency and the pain of rejection.

Austin Chronicle: Was there less pressure making a Divine Fits album than a new Spoon disc?

Britt Daniel: The only pressure I ever feel is what I put on myself, honestly – to make something I can put on and really love playing live. That wasn't any different than making a Spoon record. ... There's that freedom [with Divine Fits], and for me, it's a lot of fun being in a band where I'm not singing and writing all the songs. I love what Dan does. It would be hard to be in this position with a songwriter that I didn't think was the real deal.

AC: There's footage on YouTube from 2010 of Dan playing "I Saw the Light" and "Modern World" with Spoon at Radio City Music Hall. Was that your first time on stage together?

BD: It was. We met maybe a year or two earlier at a Handsome Furs show. I actually didn't know Wolf Parade, but I learned about Handsome Furs from this video that was really dark ["I'm Confused"]. I loved it. I watched the show and afterward he came right up to me. He's got a lot going. We just clicked.

AC: You've been known to isolate yourself when writing. Was this process different?

BD: A little. The first song we worked on was one where I wrote the music by myself, and that was part of that lonely process. I think I just set up a drum machine and came up with that song, "With You Alone." Then I brought it to Dan, and he sang on top of it. That's when I knew we were getting somewhere.

The other songs would start in our own separate quarters, and then we would bring them to each other to figure out how to make it work. That wasn't dissimilar from Spoon. But Dan is a songwriter, so he has different ideas for how to shape the songs in ways that I never would have thought of. I would come up with background vocal parts and bass for songs, and then I got to do all that stuff for his songs.

AC: Was it difficult to relinquish some control?

BD: Not really. We're adults. When he comes up with a part it's usually something I never would have thought of. I got "Flagging a Ride" as far as I could get it, and then he came up with this guitar part that gave it more power and made the chords really pop. When that happens, I'm just really grateful. That's the way it ought to work. When you're younger, sometimes people's feelings get in the way of being able to say things like that.

AC: What happened when you were challenged about a line or a song?

BD: It was a brawl! [Laughs.] It depends. If Dan objects to something, I'll probably drop it unless I think he didn't get what I meant. It doesn't happen very often, but it's bound to happen, and then I think you just have to roll with it. That's what a band's about: the combination of ideas – the eggs and bacon.

AC: Who would win a brawl between the two?

BD: I think he's been in a lot more fights than me.

AC: Why was it important for you to leave Jim Eno – Spoon's other half, so to speak – out of the equation?

BD: That was an equation I've known for so long. In a way, it was similar to when we were finished with Ga Ga Ga Ga Ga. That was, I think, the fourth record we had made in a row with Mike McCarthy, and I loved each one of them. But I felt like we knew we could make a great record with Mike. We'd done it over and over again. Why not try something new and see what other things might become of it? That doesn't mean we won't make another record with him, but I'm human. I want to make records that people like, but I also care about my experience. I like seeing what else I can do.

AC: You once told the Chronicle that you considered changing the name of Spoon after A Series of Sneaks and starting over in a sense. Was the view at the top after Ga Ga Ga Ga Ga somehow similar to the one from the bottom?

BD: We've had more success than we ever imagined we'd have, and have been able to do things we never thought we'd be able to do in Spoon. But you're right in a way. I don't think you can keep barreling down the same road forever. At least not me. ... I'll keep going until I'm an old man. I don't think I'm going to stop. You just always want to have new experiences. That's life.

The Good, the Bad and the Queen 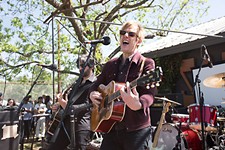