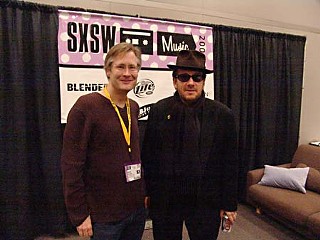 Grulke with Elvis Costello, behind the scenes at SXSW 2005 (Photo by Gary Miller)

Brent Grulke, 51, long-serving creative director of the South by Southwest Music Festival, died of a heart attack Monday at the dentist's office after oral surgery. Dedicating his life to music both as fanatic and professional, his impact on the industry is immeasurable. Every March, SXSW acts as a starter pistol for the year in music and Grulke held the gun. His history in this town is such that the news of his loss stunned the music sector emotionally and institutionally. He leaves behind his wife, Kristen, and six-year-old son, Graham.

Brent Grulke's entry in the greater music ledger reads "success story." Often, the legions who worship music struggle to make a living. Described by longtime friend and former roommate Michael Corcoran as having a massive 80-crate record collection (www.michaelcorcoran.net), Grulke parlayed an obsession with music into one of the most influential jobs in the industry.

"He's one of the few people in Austin music who made a decent living doing what he loved," points out Chronicle staff writer Margaret Moser, who Grulke said advised him in his early years as a writer. "That's important because we believed in music. It led us to dangerous places and some of us lived to tell those tales and get paid for it. Brent's life in music was as all-encompassing as you get – writer, critic, manager, agent, publicist, musician, songwriter.

"He died with all his toys."

Born in Nebraska, he relocated with his family to the Houston area just before he began high school. Once in Texas, he was drawn to Austin after reading Jan Reid touchstone The Improbable Rise of Redneck Rock, which whetted his appetite for the city's unique music scene. Grulke earned a degree in Radio-Television-Film at the University of Texas while serving as an arts editor at student newspaper The Daily Texan. After graduating in 1983, he worked as a sound engineer and managed tours for local bands.

In the late Eighties, Grulke co-wrote the Wild Seeds' college radio hit "I'm Sorry I Can't Rock You All Night Long." Thereafter, he did some stage managing at a then-small music festival called South by Southwest and later became music editor at The Austin Chronicle.

"Theirs is a garage aesthetic, based on a thorough knowledge and respect for trashy hybrids that American music has produced, as well as a love/hate relationship with the culture that produced it. They play Willie Dixon songs not like they wished they were Howlin' Wolf, but instead like they wished they were a band innocent enough to sing black blues without guilt or pretension – in short like a Sixties garage band could. And that's where they find their niche and a strange state of grace, their Eighties sophistication being a move towards raw, earnest simplicity that acknowledges, mocks even, its own ability to find its way back home and thereby moves ahead."

After leaving the Chronicle in 1991, Grulke briefly took up residence in New York City and then Los Angeles, where he worked at indie record label Spindletop. When the label relocated to Austin in 1993, Grulke moved back with it. He began assembling industry panels at SXSW in 1994 and soon took over the music booking.

"It was Brent who put the music festival in overdrive," credited SXSW co-founder Roland Swenson. "His relationships brought in so many of the artists that went on to greater success and it was Brent who recruited the music staff that carried the work even farther than we dared hope. He had a lot of faith in people and had the courage to let things happen."

"Only Brent could have convinced Roland to quadruple the number of bands at SXSW," noted Texas Music Office Director Casey Monahan. "It's going to be hard to imagine SXSW without him."

"Brent Grulke was a big part of why I felt so at home right away and every year after at SXSW," offered Rolling Stone senior writer David Fricke, who's been to all the annual gatherings since 1991. "He nurtured the festival and assured its success according to two simple, unbreakable rules: Music is all and all are welcome. Even as SXSW exploded in numbers and stature, Brent held on tight to his passion and stuck to his standards."

Fricke reflects that in the midst of SXSW chaos, he was always met with a glad-you're-back greeting and smile when he invariably ran into Grulke.

"I am greatly saddened by his passing," he adds, "because we never have enough of his kind in rock: that love, ethics, and killer good taste, all in one cool guy.

"But I will have that smile with me from now on when I come back to SXSW, reminding me to have a great time and treat the music right."

Alejandro Escovedo supplies the bluntest assessment of his friend.

"He knows where all the bodies are buried," cracked the rocker Tuesday from a Portland, Ore., stopover.

Grulke was an early supporter of Escovedo, encouraging him to evolve as a songwriter and recording the first True Believers tracks, not to mention spending many nights on the road with him as soundman and tour manager. As Escovedo loses a friend, so does Austin's music community.

"Brent loved the town's history and future," states Escovedo. "It's hard to find people with a respect for both worlds. I haven't met anyone like him in a long time."

Brent Grulke's ultimate legacy isn't evident only in March. It resides in the echoes of Austin music. Anyone dedicated to that walks in his path.

"Brent was a lifer," says Monahan. "As long as Austin loves music, he'll always be remembered."

Contributions can be made online at www.sxsw.com/brent-grulke or mailed to the Graham Grulke Education Fund: