Playback: KOKE Is Back

The original KOKE returns to a soda fountain near you 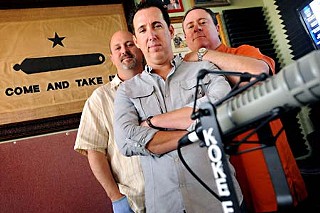 "We're in a commercial era of country," says longtime Austin radio personality Bob Cole. "That was part of the reason I left KVET. They still have a strong belief and reliance on what Kenny Chesney and Toby Keith can do in the marketplace."

That's why Cole, Eric Raines, and Jason Nassour have resurrected iconic call letters KOKE-FM, which in the Seventies embodied Austin's thinking-man-drinking-man sensibilities and certified our city as the regional mecca of progressive country. With jocks like the late Joe Gracey spinning Willie, Waylon, and Jerry Jeff Walker mixed in with Dylan and the Stones, KOKE made such an impact that in 1974 Billboard magazine named it the nation's most innovative radio station.

"When the perfect storm of music started to take over Austin in the early Seventies, the only radio station that saw the melting pot as being filled with gold was KOKE-FM," says former Austin Sun music editor and record label vet Bill Bentley. "They played everything and had an Austin pride behind them that rallied the troops. For several years, there wasn't any other place to listen on the radio, and somehow the people running the station got to play almost exactly what they wanted. Freedom is a beautiful thing."

It didn't last. KOKE shifted formats in 1977. Some tuned out. Others had their ears softened by commercial country. Many never stopped complaining about the bygone radio station.

Last month, July 1, KOKE re-emerged on 98.5 and 99.3, and made its mission clear by looping a re-recorded version of Dale Watson's critique "That's Country My Ass," which includes the lines, "Even in Texas things got way out of hand/We should have known things were going wrong when KOKE-FM left our radio band."

Asked whether the new KOKE-FM is Austin's best country station, Cole breaks out of his typically humble demeanor.

"If country music means what we think it does to the average person from Austin, which is that it's real, genuine, sincere, natural, uncontrived, then yeah, I'd be proud enough to say that we come far closer than other radio stations."

Physical proof lies in the fan mail the station's received since reappearing, messages of encouragement, song suggestions, canceled subscriptions to satellite radio, and greetings from listeners on other continents. One fan wrote: "I hope you're so successful that you buy out all the big FM stations and put your signal on every single one of them."

Willie Nelson, who gives the station's official time-check every day at 4:20pm, welcomes back KOKE-FM Aug. 25 at the Backyard. Tune in.

Lovejoys Used to Be So Cool

Legions of old friends drank up the reserves and sweated to soul 45s on Sunday at Lovejoys' end-of-days. Across the street, loyalists exited Sailor's Grave displaying their new fez-themed tattoos. Thursday, the last night of live music at the Downtown brew pub, was even busier. A long line stretched around the bar's exterior as fans waited to see Honky, which debuted locally in the mid-Nineties around the same time as Lovejoys opened. Bobby Rock and J.D. Pinkus filled the room with tweaked-out Southern rock riffs and degenerate lyrics. "Honky's performances here are an institution!" cried Trinidad Leal of Dixie Witch, who joined in on lead vocals for "Love to Smoke Your Weed." As the bar's last night of music drew to a close, another trio, Amplified Heat, played a requiem set of heavy brotherly blues. Let me be the first to say something you'll hear a thousand times in the upcoming years: Lovejoys used to be so cool.

After closing down in late June after 28 years, Encore Records is reborn into a new Downtown location. Owner Charles Eldon Lokey just signed a lease on the white brick building at 809 E. Sixth, less than a block east of I-35. "First I resolved to die and let it go," says Lokey. "Then I found this great location and couldn't pass it up." The new Encore will be the closest record store to Downtown and on a major path of foot traffic during South by Southwest. Now that he's not stuck in North Austin anymore (see "Five O'Clock Land," Jan. 13), Lokey plans to have frequent in-store performances and attract fans from metal shows at Emo's East and clubs on Red River. Plan on seeing lots of vinyl at the new store, as well as CDs and DVDs, all of which you can buy, sell, or trade. Lokey hopes to bring back his old employees and open in early September.

› South by Southwest is now accepting music showcase applications for 2013. It's $30 until Oct. 5, when it increases to $40 until the process closes on Nov. 7. The fee is nonrefundable. Last year, 10,313 acts applied and 2,286 performed, so applicants have a roughly 22% chance of acceptance. According to SXSW's Creative Director Brent Grulke, acts are judged foremost on artistic merit, but also taken into account is how many people they draw, the act's development since their last SXSW performance or submission, and whether or not they have a team (label, PR, booking) invested in the applicants' success. Apply at www.sxsw.com.

› The debut album by the UFO Club, a collaboration between the Black Angels' Christian Bland and Night Beats' Lee Blackwell, arrives next week on Reverberation Appreciation Society's record label. The 11-song effort mixes oldies pop and early Pink Floyd, characterized by essential songwriting and the duo's distinct guitars echoing over bedrock rhythms. The band consummates the release with a free show at Red 7 on Wednesday, Aug. 15.

› OutKast rapper Big Boi made an unannounced appearance Tuesday at the Millennium Youth Entertainment Center in a free show put on by Fader and Vitamin Water. The Atlanta MC appeared first during Swedish group Little Dragon's set, performing "Mama Told Me" from his forthcoming LP. After an extended set by A-Trak, Big Boi returned to the stage and performed his 2010 single "Shutterbug" to close the show. If you couldn't get in, don't sweat it. A remarkably bad speaker mix made the vocals unintelligible.

• Lollapalooza's performances were suspended and attendees were evacuated from Chicago's Grant Park for several hours on Saturday due to severe thunderstorms. That same day, it was announced that the festival will branch out to Tel Aviv, Israel, next August. Lollapalooza is produced by the Austin-based entertainment company C3 Presents.

› In a recent interview with www.rollingstone.com, local singer-songwriter Patty Griffin made three key announcements: 1) She's finished recording her next album, which will be called American Kid. 2) She'll soon embark on her first solo tour in 12 years. 3) She did not, as rumored, wed part-time Austinite/Led Zeppelin singer Robert Plant. "He's a great embellisher," Griffin confirmed. "But no, we did not get married."

› Just days after his Divine Fits started gigging, Spoon singer Britt Daniel has announced his participation in another hyped band. This one, reportedly a solo project by Verbow guitarist Jason Narducy, features Daniel on bass and Mountain Goats/Superchunk drummer Jon Wurster. Narducy told the Consequence of Sound blog that Daniel and Wurster joined him in the studio last month and recorded 13 songs. The project will be called Spl:t S:ngle.

› Austin's favorite experimental composer and pianist has begun a Monday night residency this month at Dive Bar (1703 Guadalupe). Each week Graham Reynolds meditates on different musical themes while guest bartender Jason Stevens matches it with cocktails. Last week, Reynolds led a quintet through his impressions of music from the Puglia region of southern Italy for a packed house that howled after every song. The two-hour set featured a jaw-dropping upright bass solo, a wild tambourine-led tarantella, and an experimental take on Italian reggae. See "Music Listings" for this week's setup. Playback: Love Us or Hiatus
Rare gigs and soft breakups from Iron Age and US Weekly Playback: Off With Their Fez!
Lovejoys gets priced off of Sixth Street, Swan Dive pulls back from live music, and the Blind Pets plot their own fundraising scheme.