A taste of two albums

Time as We Know It: The Songs of Jerry Jeff Walker (Aimless)


Good news: Todd Snider's released two albums in the span of two months. One collects songs associated with his hero Jerry Jeff Walker. It's lovingly curated, shambolic in all the right places, and celebrates the Texas troubadour's 70th birthday in high style, with an emphasis on the high. The other is Snider's most pointedly political work. That's something coming from the onetime Central Texan, who once offered up a tune called "Conservative, Christian, Right-Wing Republican, Straight, White, American Males." Time as We Know It is as straightforward as Agnostic Hymns is cacophonous. Among the former's 14 tracks are obvious choices like "Mr. Bojangles," which is as close to Walker's croon as Snider gets, and a properly frisky "Sangria Wine." Everyone joining in on the chorus of "Pissin' in the Wind" summons up ghosts of Walker's Lost Gonzo Band, and the jovial "Hill Country Rain" reminds us that JJW's latter period has been fruitful as well. Upon first listen, meanwhile, Agnostic Hymns is disorienting. Snider's voice is typically craggy, but the music is too. Amanda Shires' violin shadows his words, and the rhythms occasionally miss a beat. Once things come into focus, his stories are of those affected by the Great Recession, told with a wrath rarely expressed. He sounds like a member of Occupy Wall Street when pointing out, in "New York Banker," that "good things happen to bad people," a stark contrast to the marginalized folks "In Between Jobs." Its messiness matches Todd Snider's bottom-line sentiment: We live in bewildering times. 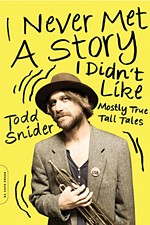 I Never Met a Story I Didn't Like: Mostly True Tall Tales
All too true tales of the music business