Plague of the Eastern Sea

Matt Hines, captain of the Eastern Sea, named his album Plague before the local band began recording. To him, the songs echoed the human condition Albert Camus wrote about in his novel by the same name. Of course he had no way of knowing then that the title was cursed.

February 2011: Plague is fully conceptualized, written, arranged, and even sequenced – primed and prepped for recording. Matt Smith signs on as producer and the band starts recording at Hot Tracks studios. After less than two months, with only the basic tracks laid down, the city condemns the building. Hines, Smith, and crew are forced to relocate to a tape-compatible studio and arrive at Ohm. There, the project becomes marred with serious technical difficulties, schedule problems, financial demand, and tension between the producer and staff. Two band members grow impatient and quit to work on other things.

When it seems that only civic and interpersonal fates are working against the record, nature smokes out the producer's house in the Bastrop wildfires – further delaying production. With all parties on edge, pressure in the studio finally boils over, and the Eastern Sea and producer Smith have to relocate to another studio to mix the now-finished tracks. In the following weeks, Hines, worn by frustration and stress, drives to Smith's home in Bastrop almost daily, tweaking Plague. Eleven months after it began it's finished. It should've taken a small fraction of that.

"I had to go through therapy," he admits of a process he says took years off his life. "It's just a fucking record. I had to tell myself that."

Today, the predetermined title seems like a harbinger of the grievous sessions Plague had ahead, but in the end, it survives to be a dense and cohesive work that bleeds like a femoral wound. Hines' bedroom philosopher pours out wordy verses and falsetto hooks over complicated arrangements marked by fingerpicking, driving rhythms, and melodious interplay.

While Miyamoto Musashi's 17th century doctrine The Book of Five Rings was ostensibly written about sword fighting, its philosophies have now translated into another form of combat: metal. Playback is proud to announce the title of Eagle Claw's new album: Timing of the Void – a reference to Musashi's text. Like Musashi, the local quartet's instrumentals are dually Zen and violent, and their timing and attack is martial. Not just a titular reference, the swordsman's lessons are the basis for the music on Timing of the Void, which, like the band's 2010 debut, was recorded by the Sword's Bryan Richie. For those who missed them killing it at Red 7 last week, Eagle Claw has one more local show before the Void drops in September: June 30 at Fire Fest, a three-stage campout where you can buy (and blow up) fireworks. Use the promotional code "eagleclaw" to get $10 off your ticket.

Prolific solo rocker and Golden Boys guitarist John Wesley Coleman III has announced a cast and crew call for a film titled Morrissey Mexican Gangbanger. The feature-length film will chronicle the violent exploits of a Moz-obsessed gangster on Austin's Eastside. "With film, as I do with music, I want to experiment with a culture clash," explains Coleman. "Morrissey's connection with the Mexican gang scene is the perfect example of that." Besides, JWC3's home streets make idyllic scenery. "The Eastside reminds me of a suburb of L.A. because of the mixed-culture population and all the good taco places and chickens running around." Soundtrack plans involve his favorite local bands recording music that sounds like the Smiths. This is the first stab at directing a feature for Coleman, who's shot short films and videos under his production handle Ghost Deer Cinema. Beg Wes for an audition at ghostdeercinema@gmail.com.

They Chose the Name

In between complaints from handicapped residents about taxicab service and doling out plaques to representatives of green businesses, the Austin City Council took a break to honor the Midgetmen. The typically smooth Mike Martinez stammered in his introduction: "I apologize, I'm just reading this. If it offends you ... I'm just reading this. They chose this name, not me. Joining us today is an Austin punk rock band, the Midgetmen." On behalf of Mayor Lee Leffingwell, who was standing feet away but couldn't be bothered to participate, Martinez read a proclamation designating June 14, 2012, as The Midgetmen Day. The fourpiece, celebrating a decade of glorious adequacy, played an acoustic cover of Weird Al Yankovic's "Dare to Be Stupid" of which Martinez remarked, "Alright, how appropriate." Reacting to the praise, bassist Marc Perlman bragged to Playback, "You can pee on Willie or Stevie Ray Vaughan's statues, but you can't pee on what we just did."

Bob Dorough is cool. Miles Davis thought so; therefore, there's no debate. Davis brought on Dorough twice to record vocal tracks including the excellent, if puzzling, "Nothing Like You" off Sorcerer. Dorough, 88, remains a bebop pianist with deft phrasing and an extremely charismatic vocal style capable of matching instrumentals like Charlie Parker's "Yardbird Suite," but you know him from something different altogether: Schoolhouse Rock!. He wrote or sang many of the animated educational series' best songs, including "Conjunction Junction" and "Three Is a Magic Number." He also taught this writer to count by fives with his practical "Ready or Not, Here I Come." "It's overshadowed my career, but I'm fine with it," admits Dorough, who's now performed in seven decades. "People pay me compliments like, 'I couldn't have stayed in school without it' and it feels good." Catch him at the Continental Club on Friday fronting a quintet, or Saturday at the Alamo Drafthouse South Lamar for some SHR classics.

• Encore Records' last days are here (see "Five O'Clock Land," Jan. 13). Come Sunday, 10pm, owner Charles Eldon Lokey closes the doors for good. Until then CDs, records, and thousands of movies are 40% off with plenty of rarities still in stock. Lokey says it's sad to watch his dream fade after 28 years, but he's excited about having time to work on his chilling true-life screenplay, Carlisle Park.

• Austin native Kathy Valentine, best know as one-fifth of the Go-Go's, performs with her outfit the BlueBonnets at a benefit for Planned Parenthood Austin, hosted by her friend, comedian Lizz Winnstead, tonight (Thursday) at the Palm Door.

• The Health Alliance for Austin Musicians is enrolling new members. HAAM Executive Director Carolyn Schwarz says a six-month moratorium allowed them to concentrate on existing members and new fundraising mechanisms. The bulk of HAAM's funding comes from special events, and on June 28, 101X is throwing a Rock in Style party at the W Hotel Downtown, featuring performances by DJ Kid Slyce, Roxy Roca, and Not in the Face. Both NITF members, Jonathan Terrell and Wes Cargal, receive medical support through HAAM. "They've saved my ass more than a couple times," lauds Terrell. 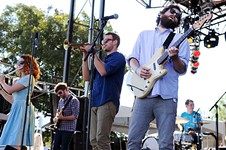