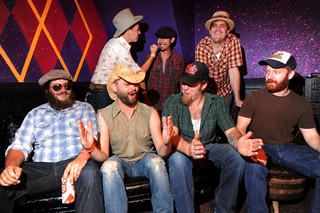 There was a lot of incest onstage for Clyde and Clem's Whiskey Business CD release party last Saturday at the Beauty Ballroom. I'm not talking about cousin sex, but rather the way all three local bands on the bill shared musicians. The family ties began with Clem's other band, East Cameron Folkcore, which, with two members absent, performed as a slimmed-down octet. Their impassioned fans filled the void, singing loudly to "Carrying the Fire" and "Sheep Staring at a Gun." The zany counterpoint to ECF's feral crow was White Ghost Shivers, featuring Whiskey Business' fiddler Curtis Thomas. Always a cause for celebration, they jig a madcap mix of cabaret, fiddle tunes, ragtime, and calypso. Whiskey shots and parking-lot tokes followed. "I can't believe this many of our fans have $10!" proclaimed the headliners afterward, looking over a packed dance floor. Whiskey Business is as country as a meth lab and equally explosive. Where other roots acts aim for slick proficiency, they go for a drunken front porch fuck-around. CCWB doesn't just sing about whiskey and weed, either. Lyrically, there's low-culture themes like goat races, people suits, and donkey punches as well. During their 90-minute set, which typically featured 25 minutes of bullshitting, Clem broke at least seven mandolin strings, a figure only bested by sawing the instrument in half and proof positive he was playing the hell out of that thing. "All human evolution has been leading to this," Clyde announced. "Bacteria formed, then fish walked out of the water – despite Fox News predictions – and finally, Clyde and Clem put out a CD." It's all downhill from here. Their new album, Greatest Hits: 1908-1987, is available now.

Chaos in Tejas founder Timmy Hefner knows records. He's put out 31 of them on his local 540 Records label, including a couple from his festival talent pool performing today through Sunday: Big Freedia's "Azz Everywhere" single and a 12-inch by Japan's Zyanose. Here's his 10 favorite records from bands playing Chaos 2012: 2) Antisect, In Darkness, There Is No Choice LP

Earlier this month, Against Me! frontman Tom Gabel disclosed in Rolling Stone that he has gender dysphoria and will begin living as a woman. Gabel will become Laura Jane Grace and begin hormone therapy. We looked to Austin's Lisa Cameron – who drummed for Glass Eye, Roky Erickson, Daniel Johnston, ST 37 – to get a personal perspective on a story that's spurred a strong reaction in the music world. "It's tremendous that Laura is coming out," says Lisa, who lived as Dave until age 42, when he faced his lifelong feelings of femininity and began identifying as a woman (see "Deprogramming Dave," June 8, 2007). "I know how she feels. It's like a weird egg that grows in you. It's scary and disruptive to your life. What hurts is to keep it in, not knowing what your family and your fans will think." Onstage, the transition's no less daunting. "From an artistic standpoint, it was like lifting 500 pounds off my shoulders," recalls Cameron about first performing as a woman. "It was also scary. People used to laugh at me and there were others who wanted to kick my ass." Cameron says transgendered people still face challenges with public acceptance and institutional consideration (Cameron's ID still reads "Male"), but the general public is becoming more open-minded with time. "I've never heard any celebrity talk about gender dysphoria and it's huge because there is a struggle for transgenders," enthuses Cameron. "People like Laura are going to make it easier. Now I want to see a country music artist come out!" Against Me! will be in Houston and Dallas on June 19 and 20 opening for the Cult. Storm Thorgerson's surrealist art is ubiquitous. Flip through any record collection and you'll see them: the businessman combusting into flames on Pink Floyd's Wish You Were Here, a motel mob with barred-out eyes atop AC/DC's Dirty Deeds Done Dirt Cheap, and the gooey wad of bubble gum connecting a gentleman's hand to his date's breast on the Scorpions' Lovedrive. With his design team Hipgnosis, Thorgerson invented the dramatic LP cover and 44 years on he continues treating it as high art at StormStudios. Among his most recent covers is Transit of Venus by Austin rock trio Black Forest Fire. After meeting at South by Southwest last year (see "Eye of the Storm," Screens, March 11, 2011), Thorgerson designed the album art crowning the locals' dark, soft-song music. Collaborating with photographer Steve Miller – yes, that Steve Miller, whose last two blues collections StormStudios designed – Thorgerson came up with an image that's enigmatic even by his standards: a cloaked man in the background of a nature scene with torrents of water coming in from out of the frame. "I feel like Storm took the guy in the black hood straight from my mind," says BFF singer/guitarist Jay Tonne. "I had been thinking a lot about witchcraft and natural/pagan magic when we were writing." Catch Black Forest Fire Friday at the Sahara Lounge.

• "Sometimes it's sad to see old punks still playing punk rock," says former Assjack singer Gary Lindsey, recalling Dead Boys frontman Cheetah Chrome performing in has-been mode. Better known here by his alter ego Black Eyed Vermillion, Lindsey teamed up with local Eastern European folk ensemble the Inheritance for a decidedly nonpunk alliance. The one-night studio blitz yielded The Pleasure Tide, pitting the Inheritance's klezmer melodies against Lindsey's cement-mixer voice with dramatic results at once barbarous and beautiful. Playback's been assured that there won't be many chances to see these two entities perform together so be sure to catch the CD release show on Saturday at the Gypsy Lounge.

• Renegade hick/songwriting genius David Allan Coe bailed on his gig at Weirdos last Friday for what his website cited as "circumstances beyond our control." It's his third such move in recent memory after canceling – according to fans – at La Zona Rosa in February 2009 and at Antone's in 2011. His Weirdos appearance has been rescheduled for July 15.

• Derek & the Dominos co-captain and local Bobby Whitlock was hospitalized on May 19 after performing at a festival in Bangalore, India. Whitlock threw up a dozen times on and offstage, but refused to end the set early. "We didn't come all the way to India to not finish the set," he said Tuesday. "Those people came to hear what a real rock & roll and rhythm and blues band sounds like." Immediately following the performance, he was taken to a hospital, where he discovered the sodium tablets he took to stay hydrated were painkillers containing codeine, which he's severely allergic to. Whitlock survived to remarry singer CoCo Carmel in a traditional Kerala ceremony by the Arabian Sea. 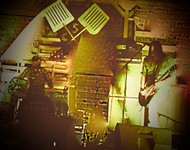 Playback: Spatula City Limits
Austin music journeys to the desert – and you're not invited