Playback: Worst of Both Worlds

R. Kelly bumps before his performance grinds to a halt. (Photo by Kevin Curtin)

Last Saturday night's show at the Mansion wasn't billed as a concert, but rather as "an intimate night with R. Kelly." The former strip club, still boasting poles, mirrored walls, leopard-print carpet, and $6 beers, hosted an increasingly impatient crowd until 12:45am when the singer appeared onstage in a red leather vest and black glasses, smoking the butt of a big cigar. From the VIP platform at stage right, he sang over a recording of "Ignition (Remix)" and then belted out the first three lines of "Bump N' Grind" before his mic cut out and the song disintegrated. Kells went about solving the problem of "too many niggas in here" by ordering all women with a positive heart to get onstage.

"I don't care if you're 500 fucking pounds, get your ass up to VIP," he said. After Kelly gave an estimated 150 hugs and disappeared backstage, DJ Kurupt of locals League of Extraordinary Gz spoke to everyone's frustration with shit-talking aimed at the main attraction: "We're gonna run this nigga right out the city. And they ain't buying no muthafuckin' albums!"

Promoter Exit Black was met with boos when he tried to explain to the angry crowd the difference between a concert and a celebrity-hosted event and promised, "I'm trying to get him to come back out, but y'all gotta quit fuckin' trippin'."

Outside, some grumbled for refunds and others glowed from the experience of getting to meet one of modern R&B's biggest stars. On Monday, Eventbrite, a self-service Internet platform that the event's organizers used to sell tickets, told "Playback" that, due to overwhelming complaints from attendees who expected a concert, they will issue refunds for the show.

"We followed a very basic and successful promotional plan that was already used in Dallas to the tune of 1,200 people, and used the exact same flier and everything so as to avoid people thinking it is a concert," reasoned Richard Amadin, who helped organize the event and confirmed that Kelly had performed for about 30 minutes the previous night in Dallas. "We didn't have any expectations for R. Kelly performing, but we definitely hoped he would."

Calle 13 has won 19 Latin Grammys and performs shows for a quarter million people in its home of Puerto Rico, but before last week, I'd never heard of them. My ignorance may be evidence of a dichotomy between the English- and Spanish-language music worlds – how heroes on one side of a border can be underground on the other – or it may evidence that I'm as in tune with Latin culture as a Doritos Locos Taco. Naturally, even though I'd brought my own translator to Pachanga Fest's opening concert last Friday, (Colombian-born, New York-raised Jhovanny Pinto), the eclectic, raunchy, and socially conscious music needed no translation. With producer/multi-instrumentalist Visitante at the controls of an eightpiece band, they rocked an indefinable mix of Latin styles with celebratory energy. As the flags of Puerto Rico, Mexico, and the Dominican Republic dotted the audience, Calle 13 echoed Pachanga's mission statement with unifying Pan-Am anthem "Latinoamérica." When they left the stage, the masses chanted "Otra, otra, otra." Jhovanny, never overestimating my attention to the obvious, translated: "Encore, encore, encore." 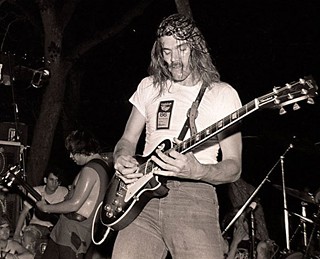 Tony Johnson, aka Tony Offender, died Saturday, May 12, from lung cancer. Guitarist in the Offenders, a linchpin of early Eighties Texas hardcore, he's recalled by early Scratch Acid/Offenders sponsor and local Rabid Cat Records owner Laura Croteau, with whom he had two children, as a devoted father fascinated with American history. Offenders drummer Pat Doyle credits Johnson's metal-influenced speed picking as helping cultivate the band's efficient style of hardcore and says he was always inspired by his bandmate's optimism. "He really drank up life and never complained. He had a high tolerance for pain." Johnson receives send-offs from two distinctly different camps. A memorial show with bands including Doyle's El Pathos and Offenders tribute act Died in Custody is planned for Sunday at the Scoot Inn, while the Sons of Confederate Veterans, with whom Johnson was a 2nd Lieutenant Commander, shoot his ashes out of a Civil War cannon at Oakwood Cemetery June 9 at noon.

• Putting to rest a year's worth of speculation, the Austin American-Statesman reported Friday that Houston's OmniBank, lender on the Austin Music Hall's 2007 complete makeover "has reclaimed the venue at a foreclosure auction for about $6.3 million," approximately half its value as appraised by Travis County. Direct Events owner Tim O'Connor sold off sister venue La Zona Rosa last October. Sources report that music promotions at both venues, mostly by C3 Presents, will continue for the time being.

• Transmission Entertainment heads Graham Williams and James Moody, along with developers Richard Kooris and Dennis McDaniel, have signed a 20-year lease on the massive Quonset hut that was formerly Tops Furniture at 1100 E. Fifth. Moody says the building, which the public glimpsed at this year's Mess With Texas party during South by Southwest, and more recently at the Fusebox Festival, won't be limited to concerts and will have a kitchen. "It's going to be raw, vintage, and industrial still," reassures Moody, "but we're going to make it have good acoustics."

• Traci Lamar Hancock, 52, succumbed to ovarian cancer Saturday after a two-year illness. The second of Tommy and Charlene Hancock's four children, Traci came up in the multigenerational Supernatural Family Band, and later stepped out with her mother and sister in the Texana Dames. Her lovely bilingual singing and accordion playing on 2004 solo effort Apasionada represented a delicate and mysterious take on the regional music of Texas. To say she was a fixture on Austin's music scene doesn't do justice to her four-decade presence on local stages. 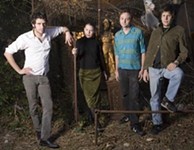