Ben Cox scrambles up the stairs and into the on-air booth with a load of CDs, LPs, his computer, and a homemade lunch. The dilapidated student radio station is a mess of discs, jewel cases, record sleeves, and ancient electronics. Only one of the turntables works with any regularity, microphones break seemingly every month, and Automation – the system that plays the commercials – is a perennial nightmare of lockups and error screens. The odds of getting through a full shift without at least one meaty technical glitch stack up even when things are at their best.

Cox plays a mixture of excavated musical auteurs and new-school classics. Here, Chrome and Ty Segall live in perfect, epoch-equalizing harmony. He's been doing his well-respected psych show Where the Pyramid Meets the Eye for over four years now, broadcasting from UT's student radio frequency KVRX-FM. He doesn't get any callers, but he's confident in what he plays. Cox and other KVRX deejays continue transmitting years of personal and passionate obsession even in these uncertain times with the station's future desperate.

The Shirts on Our Backs

Dan Knight's small, fourth-floor office in the William Randolph Hearst building sits just down the hall from the KVRX booth. It's plain and unadorned, with no more than a computer, a couple of chairs, and four walls. After a long career in radio and television production throughout Texas, Knight became the broadcasting advisor to KVRX and TSTV (Texas Student Television) some 12 years ago. He gestures toward a number on the financial records spread out in front of us: $498,000.

"When this number disappears," he states in no uncertain terms, "the lights go out."

That bottom line is surplus, essentially the emergency funds for Texas Student Media, the body in charge of UT's student media outlets – KVRX, TSTV, The Daily Texan, and the oft-forgotten comedy newspaper Texas Travesty. The numbers for each institution speak for themselves:

In total, revenue is down nine percent from last year. And that number that can't disappear, $498,000 – the number that keeps the lights on – dwindles every year.

"Things had been the same for years," explains Knight, "but a few years ago we started to see a plateau, then a small decline. Now, over the last two years, it's been a nosedive."

For decades, TSM was funded by 112-year-old news beacon The Daily Texan. As the print apocalypse continues ravaging the industry, the student newspaper has become a shell of its former cash-generating juggernaut. Advertising, distribution, and especially the classifieds revenue has all but evaporated. This bedrock of the TSM infrastructure used to pay 88% of the bills, but now, as The Daily Texan struggles, so too does the rest of UT's student media. TSM has become woefully unsustainable.

Blame lies everywhere, of course: from an excess glut of publications to a lack of grassroots community support, and the sabotaging presence of the internet. For Knight, it's terrifically sobering.

"When I started in media, the cameras were made out of wood," he tells me.

After years of producing everything from music shows to baseball games, he's now trying to fix a broken system and nurture a new, struggling generation. For him, it forces contemplation of uncomfortable conclusions, solutions that seem impossible for an institution as well endowed as the University of Texas – fixes like the potential sale of the KVRX broadcasting license.

I joined KVRX not because it has a renowned reputation or because I grew up dialed into 91.7. I didn't even know the station digits until I walked in a year and a half ago. I joined because for teenagers of a certain disposition, student radio is something you always intend to do when you go to college.

I was given a show slot with scarcely more effort than it took to walk through the door. As is customary, I spent an entire year working the 3-5am graveyard shift on Saturday mornings, spinning my favorite songs for celestial orbs and the occasional drunk caller. (I was once asked to play an old T. Rex song for a few kids in a school bus coming down off an acid trip.)

KVRX deejays are all UT students of divided interests and tastes, dutifully committed to their shows out of passion, allegiance, and the wholesome teenage dream of having the means to share favorite songs with an audience. As talk of the station's demise continues to swirl, the on-air staff does its very best to remain steadfast – even if everyone feels helpless.

"We're like doctors," says Programming Director Guillermo Hernandez, the man responsible for organizing and monitoring the performance and tastes of the other deejays. "We're doctors and KVRX is our patient. And our patient is suffering from a fatal illness, so we're trying to keep the patient alive as long as possible even though we know that the patient is going to die eventually."

KVRX staff meetings are now dominated by talk of extending the station's life span. There have been rallies, concerts, CD sales, and even a wildly successful recent pledge drive of $18,000, but it's never enough to make a significant impact. There just isn't enough money.

"We're doing the best we can, and we do good shows – raising awareness, all the stuff we've been doing," says Joe Aragon. "But in the end it's going to be a decision made by the TSM council. The students don't have much of a say."

Aragon's among the most dedicated of the KVRX staff. As music director, he's responsible for getting new music into rotation, and like the rest of the staff, he barely gets paid. (The station is volunteer run, except for the staff members who receive about $50 a month.) He's certainly not looking at radio as a long-term career plan.

"When you look at UT, and you see all this money being spent on new buildings and the football program, it feels unjust that KVRX is in the midst of all this uncertainty," complains Aragon. "They don't look at us like we're important or irreplaceable, which is crazy. Imagine a school as big as UT without a radio frequency. It's ridiculous that this is happening in a town like Austin that's founded on cooperative community."

KVRX wouldn't be the first college radio station to disappear. Across the country, a startling number of esteemed schools have lost their radio towers. Rice University, Vanderbilt, and the University of San Francisco have all lost their frequencies.

"We were informed in August 2010 that the administration had already taken measures to sell our 50,000-watt broadcast tower," says Nick Ryder, station manager at the now online-only Rice Radio, KTRU. "The transaction was basically finalized, so the student body couldn't do anything. It's interesting because our tower was donated to us with an endowment to keep it running, but Rice decided to sell it."

As drastic as it seems, the very same fate could befall KVRX, and almost did only months ago.

What We Have Here Is a Failure To Communicate

Gary Borders, a TSM director of seven months, was forced into resignation on Feb. 8 after he proposed a sale of the KVRX and TSTV broadcasting licenses. The sanitized story was a "failure of communication."

"I knew the proposal wasn't going to go over well with students, but it's something that UT is at least going to have to look at," says Borders over the phone a few months later. "Because let's be honest, there's no money there.

There's cynicism in Borders' perspective, but also a brave realism. It's hard to support the idea of selling off student-run properties, but at the same time, balancing the TSM budget seems unlikely. He was fired because his ideas made everyone uncomfortable, but no one yet has an alternate plan.

"I would've liked to sell the broadcasting license to an organization that would keep the student involvement," continues Borders. "What they're doing right now isn't going to work, not for longer than a year or two. It's not sustainable. They're running out of tricks. You can't keep doing the same thing and expect a different outcome."

Everything Borders says makes sense, but it remains difficult to come to terms with. In a statistical light, KVRX, founded in 1988, was never a moneymaker, but selling off all that heritage, attitude, and the brightly lit enthusiasm of youth just feels plain wrong. It might make financial sense – Rice traded their frequency for $3.5 million – but less so educationally.

"The first time I heard 'I Turn My Camera On' on the radio, it was KVRX," says Britt Daniel. "It was actually before it was released, so some kid must've pirated it. It's something a label would get pissed at, but I thought it was awesome."

Long before Spoon tore up modern rock radio, the beloved local band's embodiment walked into KVRX, and, like so many UT students before and after him, asked for a show. He was on the air by summer. The rules were still the same: two Texas artists, five genres, and five new songs. This is the first Daniel's heard that the station's in trouble. His concern jumps right through the phone line.

"The opinions of youth, you can't take that for granted."

A few minutes after he hangs up I get an email from him.

"Sorry but one last thought," it begins. "It would be such an embarrassment for a school the size and stature of UT to not have a college radio station. Can't UT find a way to have one? Shouldn't it be important for them to have one?"

On this lazy, late April afternoon, KVRX staff members have just pressed T-shirts – the sort of cheerful school spirit activity that lives in extracurricular joy. They're all lumped together in an open cardboard box. The design is simple: a gray shirt printed with a stylized photo of a handful of deejays.

The picture of the on-air staff hoisting huge wooden letters spelling out KVRX was taken a couple of months ago in the midst of the station's most precarious moments. It's a group effort. Even with everything painted in uncertainty, the KVRXers are still together.

None are invested in the radio industry as a career, and all will be gone after graduation. They'll be replaced – hopefully – by a new generation and another, and another after that. Administrators and board members will change opinions and recommendations, but radio kids will always stay the same. 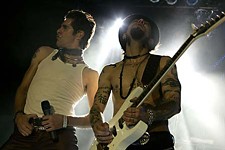