"In the public eye, Red River is dead and gone," acknowledges Jared Cannon, one of three owners at Red 7.

That's what many forecasted when Emo's, the strip's famed cornerstone, exited the district in December (see "We Built This City," Feb. 3). Soon thereafter, Red 7 transformed from a punk club to a marketing headquarters for Sony, and the Beauty Bar closed next door. Venues cropping up quickly on the central Eastside, as well as Emo's being reborn on East Riverside, further gave the impression that Red River was ceding its role as epicenter of Austin's live music community. It didn't take a weatherman to see the wind was blowing away from Red River, and it was blowing east. Those changes aren't illusions, but they're not the full monty, either.

For starters, Red 7 only loaned its digs to Sony, using the corporate rent to step up the venue's game with a remodeled interior, new sound system, and an inside stage with sight lines that now allow it to host acts that in the past would have played the Emo's front room. On top of that, as with Beerland, another essential proving ground for young locals that re-signed its area lease, the Red 7 owners just extended their Downtown run for another three years. Even with all that, the most encouraging contract might be the 3½-year one Jared Cannon just signed on the building formerly known as the Beauty Bar.

The yet-unnamed club, scheduled to open this summer, boasts a new stage for bigger, better shows (over 200 indoor capacity), and in contrast to the building's former tenants, a more dressed-down ambience. Asked if he's creating competition for himself in a town that's already oversaturated with music venues, Cannon cites an increasingly popular refrain – that of Austin's seemingly endless population explosion.

For club owners in the Red River basin, there's a bigger issue right under their feet. The city's plan to redevelop Waller Creek has long promoted fears that a San Antone-style River Walk will raise rents and displace clubs. "With Waller, everybody was waiting for the other shoe to drop, like it was eminent doom hanging over our heads," says Cannon. "But the truth is, no one really knows when the river walk is going to happen." He's right. While the Waller Creek Conservancy's design competition will yield a final architectural plan by mid-October, the project needs to be funded and there's no timetable for that. When the other shoe finally drops, however, it will land on James Moody.

His concern, Mohawk, currently stringing together a nice run of Austin Music Awards for best club, sits close to the creek. Back in April, Mohawk hosted an informational day party about Waller Creek, starring the design team of !Melk and PageSoutherlandPage. Moody says he supported the team because they were reaching out to the venues and trying to marry future designs with the local music culture. Days later, an independent jury selected finalists for the Waller Creek project and the team didn't make the cut.

"Public spaces done right can be totally badass; public spaces done wrong can destroy an entire area," Moody says. "Let's put pressure on these design teams, whoever they are, to work with the community."

Along with owning Mohawk, Moody co-owns Transmission Entertainment, which organizes Fun Fun Fun Fest and books some of Red River's biggest shows. Both parties want to preserve the current ecosystem on Red River: a destination where one can go to several shows in a night without re-parking and a place to send tourists who want to know where the good live music thrives. Moody's worst-case scenario is Waller becoming a strip of corporate chains and fancy doughnut shops. "If we put the San Antonio River Walk next to Red River, they will eat each other alive," he stresses.

I salute Cannon, Moody, and others who, against public perception, dig their heels into the ground and continue to build. When you think about the future of Red River, consider San Francisco, Los Angeles, Chicago, and New York, cities that have as many or more music clubs than Austin does, yet lack the international music identity we have because they're not centralized Downtown. That's why Red River must survive: Live music here must be accessible.

Perhaps it's a background in marketing that compels him to use charts, but when asked to characterize the Pachanga Latino Music Festival's lineup this weekend at Fiesta Gardens, founder Rich Garza draws a Venn diagram with three sets. Each one represents a music market: the Univision contingent (Calle 13, Chico Trujillo); Tex-Mex rock (Los Lonely Boys, Alejandro Escovedo); and hipster world music (Ana Tijoux, La Santa Cecilia). The small area dead center represents his interest – all of it. Garza has a funny duality about him. He's a laid-back music fan describing bands as "fucking awesome," but he's also sponsorship savvy and knows what a Venn diagram is. Garza worked in sports marketing before he linked up with Blues Traveler and Cheap Trick manager Dave Frey and "ran away with the rock & roll circus," working the H.O.R.D.E. tours and eventually landing back in his home state of Texas doing music events for a Hispanic promotions company. Compared to Old Settler's, ACL, and Fun Fun Fun, Pachanga's tiny, but Garza's fine with that. "I learned a lot in the jam-band scene, so sometimes I'm more idealistic about the show and the experience than the money," he says. What's important to Garza is having a great location like the shady waterfront of Fiesta Gardens, keeping it affordable ($15-25 per day), and sharing styles that are underserved in the live entertainment industry. "Our vision is to get people to pay attention to what's going on with Latin music," he says. "Because when they do, I think they'll be blown away." See this week's Music Listings for a complete festival preview.

• Sixth-graders from the Barton Hills Choir joined Roger Waters onstage Thursday at the Frank Erwin Center during his performance of Pink Floyd's The Wall (see "Phases & Stages"). They assumed posh British accents and wore shirts stating "Fear Builds Walls" to sing "Another Brick in the Wall (Part II)." "It's a slippery slope when you give the government or police too much power," warned Waters after the song. "On a happier note, give it up for those girls."

• Friends and family of Traci Lamar Hancock are holding a garage sale to raise money for her medical expenses. The Supernatural Family Band member and beloved Texana Dame (see "Roadside Playboys and Texana Dames," Dec. 31, 2004) was diagnosed with ovarian cancer in 2010. The garage sale, which features music sets all day long including Natalie Zoe and David Halley, takes place Saturday, May 12, 9am-6pm, in The Austin Chronicle parking lot (4000 N. I-35). If you have items to contribute, write to supernaturalsale@gmail.com.

• Student loan debtors are wanted for East Cameron Folkcore's new music video. The song, "Sallie Mae," tells of being stalked by your college loan lender. "We're a generation of borrowers coming home from college with huge debts," says singer/strummer Jesse Moore. Take a photo of yourself holding a sign with the following information: your first name, the school you attended, your major, how much you owe, and your current job. Send it to whydoyoutreatmethisway@gmail.com. Commemoration of the band's new EP, The Sun Also Rises, goes down tonight, Thursday, at the White Horse.

• The heavenly glow of Swan Dive will be the setting for a new music video by the heavy, violin-spiked instrumental outfit My Education. Filming for "A Drink for All My Friends" begins Friday at a show with headliners Equals, Dallas' the Angelus and the inaugural set by the Vidicon Lens, featuring ex-members of Experimental Aircraft. Wear white.

Playback
Are Red 7 and Red Eyed Fly merging? That and whatever happened to the Strange Boys answered in this week's music news. 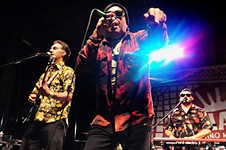 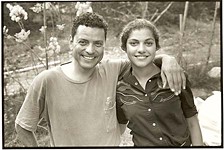