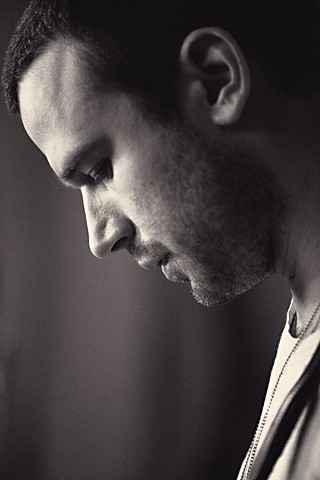 Emo's' inside room is stifling this Friday afternoon as Say Anything readies for an acoustic set. The three guitarists look relaxed, but this could be any emo crew. Then Max Bemis walks onstage.

The singer, writer, heart, and brain of the band, somehow both bigger and smaller than his band, hides behind the microphone. Even though it's the 2006 Alternative Press day party at South by Southwest, the causal audience is oblivious that this is a comeback of sorts. For hardcore fans, it's a moment of communion.

By this point Bemis, 22, already boasts near-mythical status: the pop-punk hero and Queen acolyte who all but disappeared after one near-perfect album and a catastrophic mental breakdown. Yet here on Red River, with each song unfurling in chanted unison by the crowd, Bemis the rock star emerges. Later that same night, he stomps and sneers like a toreador at the Austin Music Hall, a different man to the nervous figure hunched over at Emo's.

"Wow," he leans back, staring just over my shoulder. "A lot has happened with our band since then."

One of Bemis' biggest mental health incidents – the one that became the most legendary – was suffering delusions in Austin while on tour in 2005. Wandering the streets in the grip of paranoid delusions, he ended up having to cancel the rest of the performances. That was before the singer was diagnosed as bipolar after major breakdowns in Brooklyn and California, and prior to his family sending him to an institution here in Texas.

On "Every Man Has a Molly" from Say Anything's debut full-length ...Is a Real Boy, he wields the double-edged sword of songs cut from personal experience. In Defense of the Genre three years later, 2007, chronicles the singer's collapse and stint in "a rehab/mental hospital in Houston."

Ever the contradiction, Bemis and his wife, Sherri DuPree Bemis of Texas indie rockers Eisley, now reside in Tyler, a radical change for a young Jewish man who spent most of his life in Los Angeles and New York.

"I live around a lot of Christians and I myself have a lot of Christian faith," Bemis nods, though for him, being Jewish, with all the culture and neuroses and history, courses deep in his music. "I think Jews should do more explaining so the world can relate to us more about what it's like to be in our community."

Take "Alive With the Glory of Love," also from ... Is a Real Boy. It comes on like a rip-roaring love song but hides a sucker punch: The protagonists are Bemis' European Jewish grandparents and their lusty romance amidst the Holocaust. Typical rock fare it's not.

"A lot of what people sing about isn't conducive to singing about the experience of being a young Jewish person, or being Jewish at all," he admits. "Yeah, [Israeli-born] Gene Simmons gets down with the ladies and rock & roll, but that's a universal thing."

No one could accuse Bemis of being shy about taking on the world.

Closing ...Is a Real Boy, "Admit It!!!" throws a wild haymaker at hipsters, fake bohemians, and the music industry. "You are a vacuous soldier of the thrift store Gestapo" is hard-balanced with the song's central sentiment: "I'm proud of my life and the things that I have done/Proud of myself and the loner I've become." Today, the 2012 Bemis tweets about his dogs.

In fact, the nervous young man propped up by loyalty six years ago has since become a label boss, turned out three more Say Anything albums, three full-lengths as Max Bemis & the Painful Splits, and collaborations with his wife and childhood hero Chris Conley of Saves the Day. On last month's new Say Anything CD, Anarchy, My Dear, he kicks against new pricks on "Admit It Again."

"[The original] is a statement of where my ethics lay, as opposed to, 'I'm young so fuck everyone,'" he explains, emphasizing the collaborator he found in his wife for his war on mediocrity. "I'm of the school of thought that people have an essential force that doesn't change.

"There are things that annoyed me when I was 19 that, 10 years later, I've come to accept and they don't bug me at all. Then there are some things that I find empirically nasty and worth destroying. Those are the things I keep singing about."

Life in Tyler hasn't blunted that anger. It gives him time for contemplation.

"I was always turned on to the idea of going somewhere more pretty and quiet," he says, "where I could indulge my habits, which are pretty quiet and low key."

Compare that to New York, which Bemis saw as like "having a companion that follows you around." Now that he has real companions, his perspective has changed.

"Through coming to know my wife, I was able to realize I was never that alienated. I just liked the feeling of it."

At 28, Max Bemis stands on a career that screams "veteran," one he can capitalize on and build upon. His new deal with Equal Vision Records in upstate New York comes with its own imprint, Rory Records. Say Anything won't be on it. When it comes to new material, Bemis says, "I kind of like running it past someone."

For his sing-along sensibilities and pop-minded thinking, there's a switchback to many tracks, like he was trying to cram in every idea – from Bontempi keyboard bleeps to Borscht Belt swagger – before it burns out. That tick defined the early major-label outings of Say Anything, and while the older Bemis has wiser pacing, it's there on Anarchy, My Dear.

"I think it's morphed into an automatic response more than a conscious effort," acknowledges Bemis. "In the beginning, it was verse-chorus-verse, then somewhere along the way I got into bands like Queen that would just completely throw people off."

That includes the rest of his band.

"It's all just torture play," Bemis laughs. "There's a look that comes on their faces like, 'Whoa,' when they do the songs for the first time."

Max Bemis Song Shop (www.merchdirect.com/songshop) may be his grandest experiment yet. He takes commissions to write and perform an original acoustic song on any subject. So far, in just three years, he has written more than 1,000 songs for fans. That's not just an Internet cash-in, but one more moment of communion.

"People wouldn't be paying for Song Shop songs if it wasn't for the 11 years of hard work I put into this band," he says. "Our fans have given us exactly what I wanted."

Say Anything on Disc

That Max Bemis self-released an EP and a full album before his 18th birthday is remarkable enough. That both are tight pop-punk with hints of the venom and vigor to come make them more than just oddities. Bemis had all but disowned them for years, but good news for fans: He told me, "In the next year or two at the longest, I plan on releasing all that material."

Demos released online through www.sayanythingmusic.com, this is where the story really begins. Rich with metaphor, puns, and allegory – stripped down and brave – it's the calling card EP. Save for drums from sole remaining original member Coby Linder, it's all Bemis. "Walk Through Hell" remains a stirring live staple.

The curtain-raiser that almost became a showstopper, and still the backbone of any Say Anything show. Commentary on the music industry delves into family history, self-hatred, and band politics while hiding a dozen cunning sing-alongs. Re-released in 2006 on J Records, its bonus disc is crammed with golden discards.

Exit the boy, enter the man. Staggering out of addictive dysfunction on "Eloise" and into the romance of marriage on "Mara and Me," Bemis goes from pudgy-armed child to adoring husband.

A rawer call to arms where Bemis subverts the chest-beating of so much punk with a more self-critical plea for emotional and social dissent. As he explained, "'Change the world!' I'm like, 'I kind of suck, but let's still try to change the world.'"