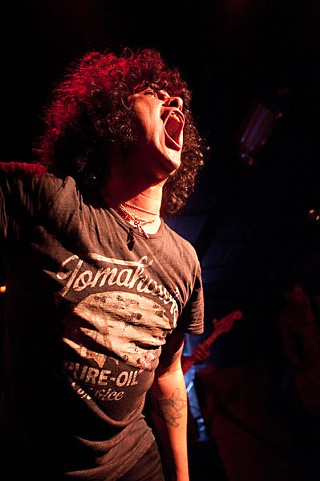 
In case anyone at the hastily arranged sell-out wasn't sure, Cedric Bixler-Zavala introduced his band: "We're At the Drive-In from El Paso, Texas!" Then they detonated "Arcarsenal" and "Pattern Against User," supercharged hard rock that spilled every beer near the stage and rendered the venue's P.A. secondary to a chorus of hundreds. Red 7's outdoor space is an ideal setting for a famous group's reunion. There's no distracting decor, no excessive stage lighting to give the band a godlike glow, and the sound's plain, realistic. If you've grown fat and unskilled in your time off, it will be apparent, but if you rock, it will be, too. Throughout a block of fast songs, the frontman gave the mic stand hell, catapulted off the drum riser, hung from the rafters, and danced like a possessed marionette. Then between songs, he poured tea from a steaming kettle and slammed it back like cough medicine. "Thanks for ever giving a fuck through so many years," he announced before quiet guitar leads pulsed on "Napoleon Solo," making room for Bixler-Zavala to show off his trusty voice, tight in melody and raw with emotion. Meanwhile, Omar Rodríquez-López stared off, motionless, uncharacteristically devoid of energy and swagger. It was both boring and respectable. Pretending you're happy is for party clowns and high school art teachers. He was present, and that's essential for reunion shows. Guitarist Jim Ward and Bixler-Zavala were in brighter spirits, sharing a mic on a superior version of "Enfilade" that went hard and milked the breakdown for all it was worth. They closed the hourlong set with a triumphant sing-along of "One Armed Scissor" and then "Catacombs." The crowd screamed for an encore. They didn't get one. This isn't about giving the people what they want. It never was.

READ MORE
More At the Drive-In 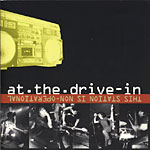 At the Drive-In
This Station Is Non-Operational (Record Review) 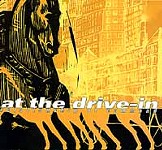