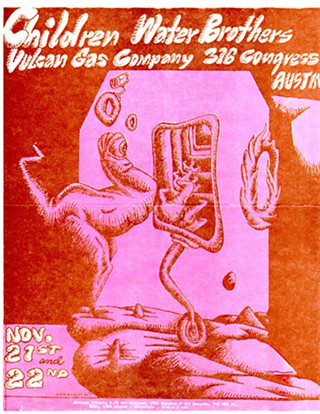 Don Evans drew this 1969 handbill for a Vulcan Gas Company show his band the Water Brothers played with the Children. Evans still performs in S.A.'s famous blues-rock outfit Ultra, which opened for the Sex Pistols in 1978.

The notion was fueled by blind faith: Would San Antonio's survivors of the Sixties and Seventies music scene give up their paper past? That's one goal of our sister city's South Texas Popular Culture Center, which itself was a gamble. Would the town just an hour south of Austin, one that's forgotten its gloriously integral Texan rock past, want to relive its heyday?

I've served on the board of the South Austin Popular Culture Center, aka South Pop, since 2007 or 2008 – whenever late graphic artist Bill Narum drafted me (see "Saw It on the X," April 1, 2005). I stepped out to do the Austin Music Commission, but when that ended, I begged to be back on the board of South Pop because being around that counter-culture art fed my soul in a way I didn't know it was hungry for. South Pop inspired and supported the idea that San Antonio and South Texas were ready for recognition of their popular culture, and thus the Alamo City branch was born.

But South Pop was born with a silver paintbrush in its mouth, at least judging by the wealth of iconic poster artists that flocked to Austin in the late Sixties and early Seventies. Jim Franklin – who Bruce Springsteen singled out during his South by Southwest Music keynote speech – Micael Priest, Guy Juke, Danny Garrett, Kerry Awn, and the others painted the path for Frank Kozik, Lindsey Kuhn, and the rock poster artists of today. That first group's presence, plus the existence of local music venues like the Armadillo World Headquarters, provided their artistic medium with a potent message: Experience the music.

San Antonio was different. It sacrificed some of its best artists of that era to Austin, among them Jim Harter to the Vulcan Gas Company and John Rogers to the Armadillo – and both those venues remain a wellspring of poster art in Austin. San Antonio had no venue with that longevity to inspire and support such a community. It had something else, however, and that was a group of promoters whose tenacity and tenure on the scene outlived the first golden age of Austin poster art which ran from 1967 to '81.

These promoters – Jack Orbin of Stone City Attractions, Joe Miller of JAM Productions, and Joe Pugliese of Beehive Productions were three of the best known – catered largely to San Antonio's taste for hard rock. That S.A. still rules as a universal metal market is no secret, but it's Texas' guilty pleasure town. If you visit S.A., you have license to rock out like you're 16 again. It's a town of eternal youth in that people there often meet one another with, "Where did you go to high school?" in a way Austin never does.

San Antonio's poster scene persevered through the Seventies, with artists Harter, Dan "Boogie" Winans, and Richard Contreras passing the torch to a younger generation, up until mid-Nineties artists like Jerry Clayworth revived the old-school boxing-style posters in a town that values nostalgia (see "My Children Are Becoming Heavy," Aug. 26, 2011). And yet, other than a handful of fan sites and overpriced handbills in Wolfgang's Vault, San Antonio music poster art remains a mystery.

So my friend and STPCC co-founder Michael Ann Coker and I asked S.A. if it would be willing to donate its memories. What transpired felt like the scene in Darby O'Gill and the Little People when the mountain opens and all the riches are beckoning you even though you know there's much more where that came from.

On Saturday morning we owned three handbills: Jimi Hendrix in 1970, the Grass Roots that same year, and a 1969 Don Evans flier for the Vulcan featuring the Children and his band the Water Brothers. By Sunday night, 90-plus original posters and handbills sat in our possession, dating from 1969 to 2012, a 45-year span. They ranged from the Rolling Stones, Iggy Pop, and Todd Rundgren to Homer, Heyoka, and the Krayolas. They beckoned to take them home with me. 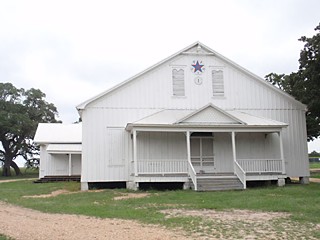 SPJST Hall No. 1: This is the first SPJST in Texas, located in Fayetteville, unadorned and basically looking like it did when it was built in 1897. SPJST stands for Slovanská Podporující Jednota Statu Texas, Czech for Slavonic Benevolent Order of the State of Texas.

I spent the night with my rock stars, laying them gently across the extra bed in my Loop 410 hotel room. A few were of sturdy stock, thick and hard. Others lay flat and limp. Some curled with brittle, browned edges. Colors remained solid and vibrant on many, faded and shadowed on others. They spoke of long-ago evenings of wild anticipation and reckless youth, convinced the night would never end, that the encore would last forever. We're going out tonight! They whispered as they were shuffled and placed side by side, read and pondered for their secrets. At long last, they rested together quietly.

These pieces lack the artistic sophistication of Austin poster art overall, but the early San Antonio posters and handbills distinguish themselves from Austin's artiness very clearly. In San Antonio, posters and handbills were not about the artistic medium, they were about the musical message. Judging from the images in hand as well a vast digital archive, graphic and visual artists like Harter and Winans were among the exceptions. For the Seventies and Eighties, the advertising handbill or poster standard was a promo shot of the band with accompanying type and a touch of artful design.

The monetary value of these documents is often negligible, but for an urban center such as San Antonio, with a gorgeous and broad-based rock history that's seldom valued in a state eager to brag on its musical past, these images tell the story of five decades of rock & roll in a city with a legit claim to the birth of psychedelia.

The Decline of Southwestern Civilization

If there's anything I love these days more than old posters, it's someone else in love with the past, like Steve Dean. His sweetheart is Texas dance halls and I find them to be not unlike old posters in that they're a dying breed.

Like San Antonio poster art, not all of them are Hollywood picturesque. Many of them were just serviceable, built for the immigrant communities that settled throughout Texas. Eastern European settlements faced the powerful task of surviving in a strange land. Polish, Czech, and German culture thrived in dance halls around the state, as would later communities of Cajuns, Mexican-Americans, and African-Americans Dean points out.

"Dance halls are also important documents of historic architecture wherein many of the newly arrived brought their building techniques and adapted them to the harsh new Texas landscape," he writes. "Many of the immigrants had to ban together to merely survive and these hallowed halls were the meeting place where their culture and oftentimes their mere survival were nurtured.

"These were social halls, culture halls, beef clubs, shooting clubs, parish or Catholic halls, exercise halls, and places of community gatherings to raise money and awareness in times of need. The halls helped these struggling cultures survive and were many times one of the first buildings built along with the church, school, or court house."

Dean's so passionate about dance halls and their place as incubators for Texas music that his nonprofit, the Texas Dance Hall Preservation group, is throwing a fundraiser hoedown Friday, April 13 at Ray Benson's Rattle Inn. The Qebe Sisters will weave their gorgeous harmonies into the festivities.

"Natural disasters and other modern factors such as neglect, aging demographics, urban sprawl, the advent of the atomic age and society's interests in TV, Internet, big city jobs, and a turn away from local and family interests within small communities," cites Dean as reasons for the decline of dance halls.

"I do believe, however, that once people experience the fun, beauty, and importance they will realize the joy of these venues."

Tickets for the Texas Dance Hall Preservation benefit are $15 at www.outhousetickets.com. 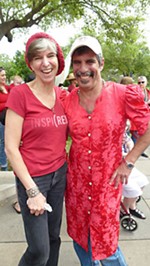