Ten years after launching her breathtaking Come Away With Me at South by Southwest, Norah Jones effectively turned her set into a listening party for her forthcoming album, Little Broken Hearts, which drops May 1. Taking the stage a full 30 minutes past the published start time due to a protracted sound check, Jones played the breakup album, produced and co-written by Brian "Danger Mouse" Burton, in sequence. The mostly maudlin material definitely bears his fingerprints. Gone are the smoky, jazzy lines; in their place are dreamy, sensual atmospherics. As she reflected on her wounded heart, Jones' usually sultry alto took on a breathy quality with a timbre strongly reminiscent of Olivia Newton-John. Jones, who's won multiple Grammys, seemed strangely lacking confidence at the beginning of her set, with awkward pauses and glances at her bandmates. They began to gel midset, with the plaintive appeal of "She's 22" and the scuzzy guitar and hip-swaying drama of "Take It Back." By the time she got around to the Appalachian-flavored revenge fantasy "Miriam," Jones was relaxed and claimed, "It's scary sharing new things, but we're all friends, right?" 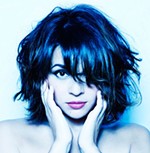