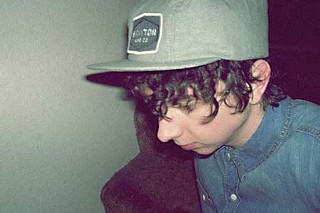 9:10pm, Scoot Inn A female rapper tough enough to hang with the brawlers in the Doomtree crew, Dessa's October effort, Castor, The Twin, rearranges the contents of 2010 debut A Badly Broken Code and spotlights the Minnesota native's slow burning ballads. "Kites" and "Palace" both incorporate jazz instrumentation to build something intimate and refined. Stripped-down closer "The Beekeeper" is projected as the first single on a follow-up. – Chase Hoffberger

9:50pm, Beauty Bar Backyard Nashville, Tenn.'s country-punk powder keg Turbo Fruits knows how to have a good time. Formed by guitarist Jonas Stein, formerly of post-riot grrrl bloodletters Be Your Own Pet, the band is happy in delirious, deep-fried debauchery. Two LPs in and the charm shows no sign of wearing off. – Luke Winkie

10pm, Skinny's Ballroom Texans Chris Masterson and Eleanor Whitmore racked up credits with Son Volt, Jack Ingram, and Regina Spektor before pairing professionally and personally and heading to New York to seek their fortune. They found it not only as part of Steve Earle's Dukes and Duchesses, but also with Birds Fly South, their beautifully crafted and intensely melodic debut for New West Records due out in April. – Michael Toland

11pm, Barcelona Rupert Taylor's XXXY moniker is one of many producers redefining the slippery UK garage electronics of the early 2000s with flecks of Timbaland R&B and fuzzy trance hooks. The Manchester-based producer constructs elastic dance floor throbs slathered with cut-up vocals and fleet-footed percussion as one of the most hedonistic disciples at the bass-music altar. One spin of "Ordinary Thing" and you'll be singing his praises.
– Luke Winkie

11pm, Red 7 Patio With a career stretching back to the Sixties, Lee Fields has enough R&B bonafides to satisfy the pickiest Northern soul collector. His 1979 LP, Let's Talk It Over, fetches high prices in R&B nerd circles, but it's his recent work with the Expressions that's put him with Sharon Jones and Charles Bradley at the forefront of the soul revival. His latest record, Faithful Man, drops the day before his showcase. – Michael Toland

11pm, IFC Crossroads House at Vice; Thu., 1am, Club de Ville Trevor Powers, aka Youth Lagoon, is Ben Gibbard for the 2012 generation. His tunes are dreamy electro-tinged slow burns that feel like a snowstorm. Although Youth Lagoon has only released one album, last year's The Year of Hibernation, this 22-year-old Idahoan already grips the hearts of hipsters and bloggers nationwide. – Zoe Cordes Selbin

11pm, Central Presbyterian Church After spending the past few years alternating between pop duo She & Him with Zooey Deschanel and rootsy supergroup Monsters of Folk, Portland, Ore.'s M. Ward now gears up for the April release of his next solo disc, A Wasteland Companion (Merge). During the past decade, Ward's positioned himself as one of the leaders in the indie-folk movement with a sound both present and past. – Jim Caligiuri

11pm, Buffalo Billiards Jonathan Terrell began making a name for himself as a rootsy singer-songwriter, but nothing prepared us for his local teaming with drummer Wes Cargal. Not in the Face unleashes country-punk-rock blues that's both boisterous and electrifying and yet not lacking subtlety. Last year's debut, Bikini, tempered with plenty of Texas redneck attitude, won spots on quite a few Austin Top 10 lists. – Jim Caligiuri

11:10pm, Red 7 Everyone in Hacienda is either a brother or cousin to everyone else, and they sound like it. The San Antonio quartet is deeply rooted in that city's unique Tex-Mex tapestry, bouncing effortlessly between fuzz-pop, country-rock, and Chicano soul. 2010's Big Red and Barbacoa played almost as good as its two namesakes taste together. Producer Dan Auerbach of the Black Keys is back at the boards for forthcoming follow-up, Shake Down. – Greg Beets

11:15pm, Stubb's; Fri., 12mid, Easy Tiger Patio The buzz surrounding Alabama Shakes has grown so loud you'd be forgiven for not realizing the quartet has only a four-song EP of bluesy Southern rock & soul under its belt. Since its release the Athens, Ala., act has conquered late-night television, signed to Dave Matthews' ATO label, and Brittany Howard – who's worn out a Janis Joplin record or two – has one hell of a vocal instrument, as the world will learn upon the release of Boys & Girls. – Thomas Fawcett

11:35pm, Lustre Pearl; Sat., 12mid, Hype Hotel Imagine a burned-out teenage boy, smoking weed and noodling on a guitar all day at Venice Beach. The brainchild of Nathan Williams, these lo-fi loser anthems are anything but lame; these guys are fast, raw, and fun. The unapologetically annoyed and apathetic lyrics are married to sunny, fuzzy guitar riffs that sound like they've been through the blender a few times. – Zoe Cordes Selbin

12mid, Swan Dive Hugging a DIY ethos that values functionality and form only inasmuch as they don't get in the way of whip-smart hooks and half-winked quips, the Coathangers out of Atlanta happily burns the candle at both ends, its repertoire leaping from wild riot grrrl ragers to homespun punk ballads in just a few bounds. Latest album Larceny & Old Lace, likewise prods at its idiosyncratic yet familiar garage-pop formula. – Adam Schragin

12:15am, Scoot Inn Like fellow Twin City institution Rhymesayers Entertainment, Doomtree Records has built an underground empire on hard-hitting beats, dexterous lyricism, and an army of rappers that can't stop putting out albums. The label's core, a seven-person foundation led by POS, Sims, and Cecil Otter, released its second LP in November. Titled No Kings, the disc proves the providence of "The Grand Experiment." – Chase Hoffberger

12:15am, Mohawk Patio With snares that ratchet up like a sitcom slow clap then explode into dance music's ubiquitous oonce-di-di-oonce-di, this oh-so-French and Julie Budet-fronted crew doesn't need to speak a lick of English to tell you what's up. That would be its unapologetic candy-colored take on pop and fuck-all joie de vivre.
– Kate X Messer

12:15am, Lustre Pearl Sacramento, Calif.'s barn-burning, rabble-rousing, shit-kicking Trash Talk symbolizes the best of the basement-punk ethos; four kids starting as much trouble as they can in 90-second bursts. Moments of snarled doom or corrosive thrash are mixed in, but it's mainly just pure-blooded hardcore, and last year's "Awake" 7-inch came pretty damn close to perfection. – Luke Winkie 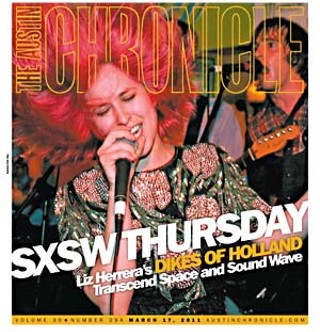 12:30am, Valhalla The shout-a-long garage punk of local favorite Dikes of Holland is reminiscent of the Gories or what it might have sounded like if that band yelled and did tons of speed. For the Dikes, high-gain guitars and vocal reverb are necessities. The local quintet puts on a searing live show thanks to lots of mic sharing and dynamic frontwoman Elizabeth Herrera. A self-titled 2010 debut and plenty of singles on local imprint Sundae encore. – Kevin Curtin

12:45am, La Zona Rosa; Fri., noon, Radio Day Stage, Austin Convention Center It's been a hell of a year for Austin's Gary Clark Jr. After years of toiling away on the local scene, the 28-year-old blues guitar phenom released his major label debut Bright Lights on Warner Bros., played on Late Night With David Letterman, and just last month was introduced at the White House as "the future of the blues" before playing five feet from the Obamas. – Thomas Fawcett

1am, Haven Prolific electronic composer Sascha Ring has found success mixing intricate, digital experimentation with techno music. Last year's The Devil's Walk for Mute Records was a grand departure: moody, more pop oriented, and with a paranoid frailty that recalled Thom Yorke's solo output. While the album lacked the climatic resolve of his post-rock touchstones, there's beauty to be found in its unresolved tension. – Austin Powell

1am, Red 7 Patio; Fri., 12mid, ND at 501 Studios Cults is cute. Made up of couple Madeline Follin and Brian Oblivion, the band produces sweet, twee songs, and even the sad numbers sound adorable. Last year's eponymous major label release sounds like it sprang from a jukebox in 1965, its twinkly pop somehow totally vintage and completely relevant. Don't be fooled by the sweetness, Follin's voice packs a wallop. – Zoe Cordes Selbin