The weekend Bruce Springsteen loaded into the Armadillo World Headquarters 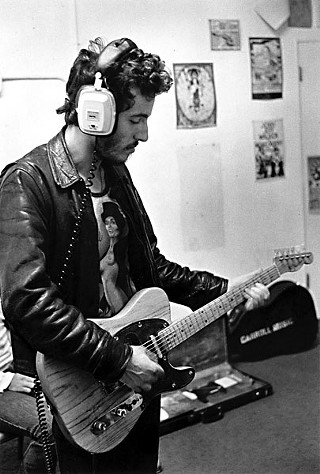 The Boss backstage at the 'Dillo, 1974 (Photo by Burton Wilson)

The South hadn't been kind to Bruce Springsteen.

An April 1973 gig opening for the Beach Boys in Atlanta sold 3,000 tickets in a room big enough for 16,000. In Fayetteville, N.C., there was a show supporting Chicago that he'd later describe as "a soul-destroying experience." Rich­mond, Va., followed, where Barbara Green for The News Leader wrote: "Bruce Springsteen is a curious performer. Thin and pale and dressed in black, he looks like a parody of early Bob Dylan. His voice is undistinguished, though it cannot be ignored in his songs, and his guitar playing is somewhere to the left of center of a bell curve."

Nearly a year later, before a February concert at the University of Kentucky supporting second album The Wild, the Innocent & the E Street Shuffle, band manager Mike Appel got into an argument with drummer Vini Lopez. A day later, Springsteen asked for Lopez's resignation and the band was forced to cancel the rest of its regional run.

Springsteen addressed his Southern plight when he arrived in Texas in March 1974. On KLOL-FM, after the first of four nights at Houston's Liberty Hall, Springsteen said: "It's hard. We just did Atlanta, and we just did Nashville, and it was really zero. That was two zero gigs. In Nashville, people at that particular branch of the record company were like, 'Zzzzzz,' so the FM station didn't even know there was a second album out. There's no records in any of the stores.

"So you go down there and you play this big place, and you turn your microphone on and you face the band. You play to the band because no one else is there."

But the Bayou City was hip to Springsteen, largely because Appel had sent KLOL a demo of "The Fever," which had gotten play around town. The radio segment, an eight-song set bookended by a seven-minute interview, helped Springsteen conquer his first Southern city.

Five days later, on March 15, he arrived in Austin for a two-night stand at the Armadillo World Headquarters, which was razed in 1981. Both shows are remembered here today as the stuff of legend only the likes of Bruce Springsteen could create, concerts people still talk about 40 years later. The Chronicle met with a handful of attendees and those behind the scenes, combing through foggy memories to sort out what happened that weekend.

'It's Hard To Be a Saint in the City'

Eddie Wilson, owner, Armadillo/Thread­gill's: We'd been doing a number of Arma­dil­lo shows with Wild West Productions out of Houston. Those guys learned early on that they could make friends with an entertainer by talking him into playing the Armadillo. Since they were doing several dates, a number of times they'd put people in the Armadillo who couldn't make any money and sell it out wall-to-wall and maybe break even. To them, it was a feather in their cap because people thought better of them for it. At the end of the tour, bands would be talking about this one funky joint in Austin instead of empty municipal arenas and other places that they'd play.

Micael Priest, poster artist: We were still a fairly small community in those days, and before we started, the cowboys and the hippies stayed pretty far apart from each other – mostly out of fear for the unknown. We had continually tried to mix them up, and our Willie Nelson shows had really done that well. They finally realized that they had way more in common than they had to fight about. If you go far enough right and far enough left, they meet in the back.

Wilson: We booked Springsteen for a Friday and Saturday and were worried that it wasn't going to sell. We had the idea, and I'll credit Wild West. I had Alvin Crow & the Pleasant Valley Boys booked to play those two nights. Wild West suggested that we play Springsteen on Friday and just charge $1 and see if we could cause a frenzy on that first night to help us with the next. To do that, I had to change my deal with Alvin from a percentage of what came in to $300 to open up the show.

Alvin Crow, fiddler: We had a meeting in the beer garden to decide how much we were going to charge – Eddie, me, and Springsteen's manager [Appel]. Eddie's going, "How much should we charge?" The guy goes, "Well, let's talk about the first night first. Five dollars, how about that?" Eddie goes, "That's too much." So the guy goes, "Well, we don't need to make a whole lot of money. We're promoting on this thing. How about $3?" Eddie goes, "That's too much." We ended up at $1 for the first and $1.50 for the Saturday show.

Wilson: Tiny McFarland had driven all night to get here from Lubbock, where he had just left the Joe Ely Band. He'd played with Alvin before – they were all Texas guys – and Alvin said to him, "You can play on this gig at the Armadillo." So bam, it was booked and he was here. He got to the Armadillo and Alvin said to him, "Sorry, Tiny. You can't start tonight. It's just not a break-in kind of night. There's a guy that we're opening for who's supposed to be really hot shit, someone named Bruce Silverstein. And we're gonna show him how good we are and how tight we are." Alvin proceeded to just absolutely rock the place out.

Well, Mr. Threadgill was at the Armadillo that night, and he was standing next to Tiny McFarland while Alvin played his set. Springsteen was back there watching from the side, and he was pacing back and forth. I think I read in one of the reviews that Bruce admitted to being nervous because he had never seen a country audience make the switch to that kind of music so quickly. He's pacing around and Mr. Threadgill leans in to Tiny and says, "That young fella pacing back and forth, he's as nervous as a coon trying to pass a peach pit."