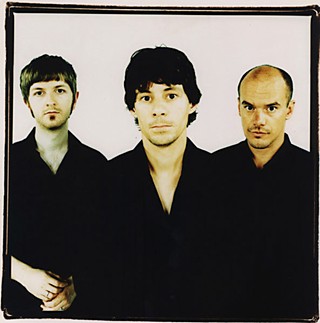 
Leander, Texas, is a long way from London, but not if you're Cotton Mather.

Fresh off a successful Kickstarter campaign to fund the expanded February reissue of its 1997 closet classic, Kontiki, the Austin pop purists are reuniting for South by Southwest. Upon its initial release, the quartet's sophomore effort, a rough-hewn blend of power pop, psychedelia, and erudite lyricism, generated only a polite response. Then Rainbow Quartz released it in the UK a year later. Shortly thereafter, Noel Gallagher of Oasis happened upon a copy and sang the album's praises to a nationwide BBC audience.

"Bob Geldof was a programmer at some independent station in London," recalls guitarist Whit Williams. "He was playing it, and it was selling at this shop in Notting Hill – Minus Zero Records. I think that's where the Oasis guys got it."

According to guitarist/vocalist Robert Harrison, eschewing the studio to record on four-track at a clapboard house just outside the Austin suburb of Leander helped give Kontiki its wings.

"The first thing I learned once I was in charge of recording was that you can't break music," Harrison says. "It seemed to me that a lot of people approached recording music in a professional studio like a Volkswagen engine: Once you took it apart, you could never put it back together."

Out in the sticks, Harrison's songs had room to grow. Even amid a surfeit of nods to the British Invasion, an underlying sense of time and place left a few fingerprints on Kontiki.

"We were just trying to make something we loved," Harrison says. "The joke was we were just hicks, out here in the country eating fried chicken and drinking Budweiser, making songs and burying them in the backyard." – Greg Beets