There's not an original thing about this incredible, derivative, early Sixties garage rock, which is to say it's absolutely awesome.

Geographically, Maria Apetri (aka Fallulah) is from Copenhagen, Denmark, but musically, she's all over the place, aping everyone from Enya to the Lookout! Records bands from the Nineties.

Haven, the debut of the consonantly abundant Chllngr, was some type of dub as yet undefined until the subsubgenres fully populate. Suitable for trances.

Q: What, value your skull? A: Tech metal.

For someone Faroese, Teirtur sounds remarkably American. Eef Barzelay with an accent.

Joy Division meets Station to Station-era David Bowie. Not that they like each other.

Another Kyst connection in Ludwig Plath, whose desolate bedroom folk and techno is Berlin-based.

The terrific Houston pianist is equally adept in both jazz and hip-hop, as his new Blue Note album Black Radio clearly attests. The jazz band to see at South by Southwest.

Hard-blowing, award-winning saxophonist has long been a stalwart of the Austin scene.

The most visible jazzman in Austin, this fine trumpeter prides himself in his Miles Davis-inspired playing and project concepts.

San Antonio vocal/bass duo breathes new life into old standards with fresh arrangements and a flair for the exotic.

The charming singer has been dividing her time between Austin and NYC. She recently toured with Lyle Lovett and will highlight selections from her forthcoming release, Way Down Low.

Lee Ving's bad attitude is offensive, even to punks.

Every member of Off! has been in an awe-some band (Redd Kross, Burning Brides), including Keith Morris, who was Black Flag's early vocalist and also founded the Circle Jerks.

This Dallas band opened for the holy trinity of the Sex Pistols, the Ramones, and the Clash, while its song "My Girlfriend Is a Rock" has persevered. 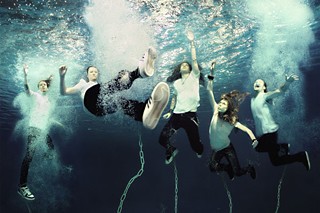 Finland/Iceland: Technically, Neither Is On the Scandinavian Peninsula

Glo-fi teenager remixing the shit out of the Wombats, Foster the People, etc. He's also so young he probably needs a permission slip for South by Southwest.

This wistful Dublin, Ireland, indie-pop trio augments its sunny confections with a spot-on rendition of the Everly Brothers' "Cathy's Clown."