This year, the biggest breakout success at South by Southwest Interactive wasn't an app or a social network. It was Jay-Z, the business, man. On Monday night, the Brooklyn mogul anchored the American Express Sync show at ACL Live at the Moody Theater, a grand spectacle on an X-shaped stage rig that was simulcast live on YouTube. Opening with Black Album banger "What More Can I Say," Jay-Z delivered a 75-minute set of Roc-a-Fella classics without a hype man or special guests. While a bit stiff, Hova didn't have to do much to win over the capacity crowd of smartphones and badges held by the likes of The New York Times Editor Jill Abramson and Linkin Park's Mike Shinoda. He's the sultan of swagger, after all, with an endless catalog of hits. "I got a million of these," he remarked after "La La La." Then, to reiterate the point, he rolled out five consecutive blockbusters with authority, including "Run This Town." The patriarch of hip-hop's first family also paid tribute to his daughter, Blue Ivy, with the unreleased "Glory," a moment of rare reflection that found the rapper struggling to describe the beauty of his newfound parenthood. Watch it on repeat on American Express' YouTube channel.

Never has a band had more to prove on the Austin City Limits soundstage than Alabama Shakes on Tuesday evening. The Muscle Shoals-inspired quintet arrived with a flurry of hype and only a four-song EP to its credit. (The band's debut, Boys & Girls, drops next month on ATO.) While not on par with previous SXSW soul sensations Amy Winehouse, Adele, and Charles Bradley, singer Brittany Howard has a stirring voice and bruising sincerity that demands attention. Mixing Gulf Coast R&B and homegrown country-soul, Alabama Shakes recalled Bettye LaVette's collaboration with Drive-By Truckers on stronger numbers like the impassioned plea "Be Mine" and rockabilly romp "Heavy Chevy," but a choice cover would have gone a long way.

Attention SXSW showcasing artists: Billy Corgan has some fighting words. "I'm shocked by the lack of evolution in alternative rock music," he told me backstage after his Interactive panel with author Brian Solis on Monday. "Let me put it this way: I should not be here to the level that I still I am. If the music out there was that fucking great, where is someone crushing me on the numbers? They're not. Our generation crushed a lot of bands right out the fucking door. And they had to sit on the sidelines for 20 fucking years until people got nostalgic and brought that stuff back." His Smashing Pumpkins are readying the release of a new album, which Corgan says will be more of a multimedia experience. "I'm standing exactly where every artist should hope to stand," said Corgan, who remained in town to see the Yahowa 13 documentary The Source, which screens one last time Friday, 6:45pm, at the Alamo Lamar B. "The only thing left to do is be great." 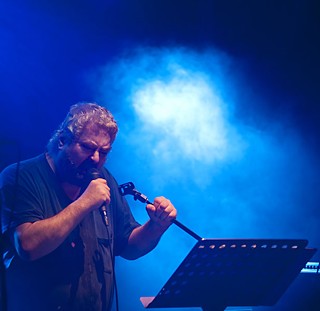 "In the darkness there's no other love except you," Daniel Johnston wrote in the foreword to Space Ducks: An Infinite Comic Book of Musical Greatness. But the release party for the pop savant's new graphic novel was a vastitude of warmth and gratitude on Tuesday night at the Belmont as musicians paid tribute to Johnston in song. Highlights included Kimya Dawson, Jeffrey Lewis, and local alt-folkie Graham Wilkinson all combining for "Story of an Artist" and the Space Ducks theme song; the indie-prog pop of Brooklyn's Dinosaur Feathers; Johnston's own "Rock This Town"; a startling cover of rarity "Cold, Hard World" by Okkervil River's Will Sheff; and a ghostly jaunt by Alex Maas of the Black Angels, who's showcasing new material at Empire Automotive tonight at 11pm. While the iPad app is available as a free download now, Johnston's manager, Tom Gimbel, says the accompanying soundtrack will arrive digitally next month and includes tracks by Unknown Mortal Orchestra, Deer Tick, and potentially Lykke Li, along with seven new Johnston tracks produced by Austin's Adrian Quesada.

• The Austin Record Convention was canceled after founder Doug Hanners suffered a concussion in a car accident earlier this year. Buyers can look forward to the fall edition Oct. 26-28.

• George Clinton made a surprise appearance at the CNN Grill on Sunday to promote his Indiegogo campaign to restore his studio and early recordings. Help the Funkadelic pioneer at www.igg.me/p/66930.

• Bruce Springsteen's keynote speech at noon in the Austin Convention Center's Ballroom D is being simulcast by NPR, on air and online. Tune in at www.npr.org.

• After appearing on KUT-FM's morning broadcast from the W Hotel, Texas "Gambler" Kenny Rogers was scheduled to join Lionel Richie last night at his Billboard showcase at ACL Live at the Moody Theater.

• Director Robert Rodriguez made a rare appearance with Chingon, his soundtrack outfit with Del Castillo, at the W Hotel on Tuesday. The occasion marked the official launch of his Spanish television channel, El Rey Network, and new Austin-based studio, Quickdraw Animation. First thing on the docket: a remake of the 1981 sci-fi fantasy Heavy Metal.