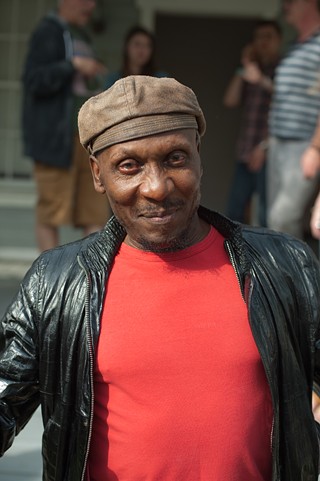 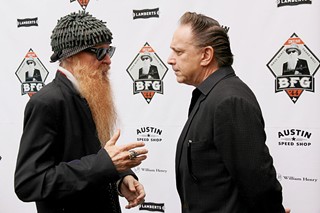 In what was essentially a living room concert, OTR had the distinct pleasure of being a fly on the wall for Jimmy Cliff's Daytrotter taping Thursday afternoon. Backed by only a drummer and second guitarist, the reggae icon delivered a startling acoustic set of transcendent grace and pin-drop intimacy that included the coupling of "I Can See Clearly Now" and "The Harder They Come." Nudged for a fourth song, Cliff responded with an a capella track and the refrain of "Baby Don't Cry" sounded alternately like a hymnal and lullaby. The Rock Island, Ill.-based website, which records and releases exclusive sessions for $2 a month, has been recording locally out of the home studio of in-demand producer Danny Reisch (the Bright Light Social Hour) since Monday with more than 30 bands on the docket. Unlike previous years, most of sessions are streaming live, allowing those at home to get the same in-studio experience OTR had for Counting Crows, who dug up August and Everything After cornerstone "Sullivan Street" and closed with a stellar cover of Gram Parsons' "Return of the Grievous Angel." And Daytrotter isn't alone rolling tape at Good Danny's. Following filming at both the Austin City Limits Music Festival and Fun Fun Fun Fest last year, director Terrence Malick is supposed to be stopping by some time with Christian Bale and Natalie Portman for the upcoming film Knight of Cups and Lawless.

Billy Gibbons enjoys the finer things in life. The ZZ Top guitarist already has his own tequila brand. Now he has a barbecue sauce, BFG, and a luxury pocketknife, El Señor – all Texas barroom essentials. (Could an airport restaurant be far off?) Both products premiered at a private event at Lamberts on Friday that featured two sets by Mike Flanigin's Hammond B-3 Trio with Jimmie Vaughan, which layed down exquisite instrumental jazz-blues with effortless grace. Gibbons joined in briefly for the second set, taking lead vocals for the thunderbird rockabilly of "Wine Wine Wine" by Dallas' the Nightcaps. On a related note, the Bob Bullock Texas State History Museum opens a special exhibit on Saturday, Texas Music Roadtrip, featuring the baby grand piano from the Armadillo World Headquarters and other artifacts from across the state, most notably guitars used by the Vaughan brothers. "Mine is the white one that I used on all the Fabulous Thunderbirds records, and I also made Strange Pleasure with it," Vaughan said in the announcement. "Stevie's guitar is the one they call Number One. That's the guitar he played on Texas Flood and all that stuff. He played that one forever." 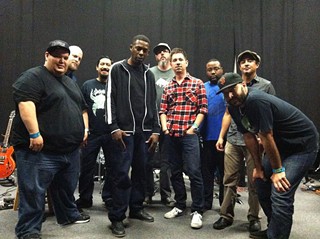 Adrian Quesada might be the only known link between Daniel Johnston and GZA at South by Southwest. The local guitarist produced the soundtrack to Johnston's first graphic novel, Space Ducks: An Infinite Comic Book of Musical Greatness, celebrated at the Belmont on Tuesday, and he's backing Wu-Tang Clan's cerebral MC with his instrumental funk outfit, Brownout, on Saturday at Haven, 1:10am. "He's doing mostly stuff off of Liquid Swords and a few Wu-Tang classics," relayed Quesada after his second rehearsal with GZA this week. "Honestly, dissecting the record as a band was really interesting. That stuff was done with no regard to someone playing it, so it's definitely a challenge." Both Brownout and the guitarist's Grammy-winning, local Latin powerhouse, Grupo Fantasma, showcase for Nat Geo on Saturday, 8:30 and 10pm, respectively. The former has a new album, Oozy, due April 24. "It's a little bit heavier and more in the realm of funk and psychedelia."

• Black Star was a one-off collaboration between Talib Kweli and Mos Def that produced one underground classic in 1998. The problem is that only half the pair showed for the duo's highly anticipated reunion show for Google on Friday. Instead, Kweli brought out a handful of all-star friends to liven up the YouTube simulcast, including Bun B ("Strangers Paranoid"), Jean Grae ("You & Me & Everyone We Know"), and Pharoahe Monch ("Still Standing"). 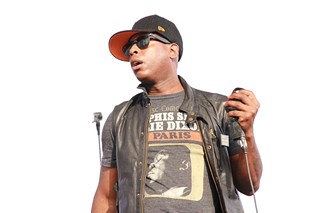 • Late Thursday night, Lil Wayne played the role of court jester for his Young Money showcase, leading and introducing his roster – Birdman, Bow Wow, and Busta Rhymes – with chronic charisma. By contrast, Eminem, a surprise headliner the following night, didn't fully take the spotlight until well after 50 Cent finished rolling out his club classic Get Rich or Die Tryin'. The two superstars shared the stage for a trifecta of tracks that included "Crack a Bottle," trading verses to a backing track and with a sevenpiece band. But the evening came to an abrupt and frustrating end at 12:09am, before Slim Shady even really touched his personal catalog. If, as he rapped in 8 Mile, you only get one shot, Eminem missed his chance to blow.

• Austin City Limits has opened up its vaults with a new iPad app, offering 40 episodes from the likes of Willie Nelson and Pearl Jam. You can watch three episodes for free, but a subscription will run $2.99 per month. ACL tapes a new installment on Sunday, with a return visit from the Shins. For ticket info, scope www.acltv.com.

• Surprise find of the day: Spoek Mathambo might be the most promising global hip-hop artist to emerge since K'Naan. The South African rapper fused elements of trip-hop, grime, and post-punk into a compelling vision of post-Afrobeat at the Spin party Friday at Stubb's, which peaked with his complete revision of Joy Division's "She's Lost Control."