Last year, the MTVu Woodie Awards were a prime-time spectacle shoehorned into the Austin Music Hall. Thursday, the annual celebration of college buzz bands took over the parking lot behind the Austin Convention Center for an all-day, two-stage marathon hosted by Matt Pinfield, with free barbecue from the Salt Lick in lieu of a red carpet. While still heavy on major-label fodder, there were breakout performances well before the start of the official program. Brooklyn rapper A$ap Rocky had blunt rhymes and Southern swagger that leaned back like Houston circa 2003. Austin's Gary Clark Jr. took off next, alternating between Hendrix's heavy psych and Dan Auerbach's grit-blues, and then sweet Motown soul only hinted at on his Warner Bros. debut EP Bright Lights. OTR caught up with Clark earlier to get the skinny on his appearance at PBS' In Performance at the White House: Red, White and Blues and President Obama's closing refrain for "Sweet Home Chicago." "I didn't think he was going to do it," laughed Clark, who's currently working on demos for a full-length album. "I thought it was cool to see him up there and really appreciate the blues as an art form. It was one of those moments where I was like, 'Is this really happening?'" Asked what he's learned from playing with such prestigious company, Clark responded, "Turn up. I've got to crank my volume to hang with these guys."

Two years ago at South by Southwest, Wayne Kramer delivered a profound testimonial about his personal struggles with homelessness, drug addiction, and imprisonment – and his long road to redemption – that had inmates and yours truly choking up at the Travis County Correctional Complex. The occasion marked the U.S. launch of Billy Bragg's Jail Guitar Doors, the nonprofit that provides a creative outlet to assist inmates in the rehabilitation process. Kevin Hoetger, leader of the Austin pub-rock outfit English Teeth, has been helping to carry out the mission locally by providing weekly, 90-minute songwriting lessons – the longest allowed under visitation guidelines. "They give me a whole new perspective and appreciation for life," Hoetger told the Chronicle. "They gush about getting out and starting over." For tonight's showcase at White Swan Lounge, headliner Tom Morello is planning an Occupy flash mob that will march to and around the venue. "I thought it was important that at a music gathering of that size, to have a place where the rebels, revolutionaries, rockers, rappers, and the 99 percent could gather and have a mighty SXSW throwdown," the Rage Against the Machine guitarist told Rolling Stone. OTR shared an elevator with Morello late Wednesday night at the Omni and asked whether he was going to take his showcase to the streets. "We'll see," he responded. "It's going to be an unpredictable night."

Perched atop the fourth floor of the massive parking garage at Trinity and Ninth streets, Google's Live From the Lot offers a welcome respite from the hullabaloo of South by Southwest, in person and online. The two-day music series is being live-streamed on YouTube, which might explain the lack of attendance during OTR's brief visit Thursday afternoon. A former member of Vivian Girls, Dum Dum Girls, and Crystal Stilts, Frankie Rose pulls equally from all three, issuing dark, girl-group sounds dressed for a pagan funeral and with washes of reverb and surf undertones. The lineup on Friday is stellar: Heartless Bastards (1:30pm), Two Gallants (2:30pm), Grimes (3:30pm), Jimmy Cliff (4:25pm), Black Star (5:20pm), and the Shins (6:40pm). Tune in at www.youtube.com/presents. It beats the stairs.

• In light of SXSW documentary Bad Brains: Band in DC, Austin's punk renaissance man Tim Kerr on his blog set the record straight about the Big Boys' altercation with the group. "It has always been looked at by them (and others) as a gay issue, when in fact for us, that was only a small part of a bigger picture," wrote Kerr. "In a scene where everything was based on community, they took money from Biscuit and defaced property of the very people who had opened their home to them." Read the rest at www.timkerr.net.

• In town Monday for a special engagement at the University of Texas at Austin titled "A Lecture on Hope, Haiti, & Service," Arcade Fire's Win and Will Butler and Régine Chassagne were spotted both at the keynote speech and the panel discussion on Woody Guthrie's legacy. 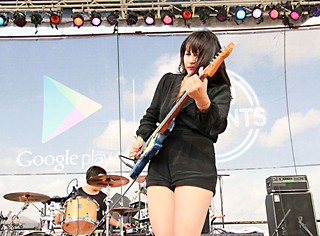 • Jack White's Third Man Records has rolled back into SXSW. His tricked-out record store on wheels was parked at Waterloo Records early Thursday, selling limited-edition vinyl releases from the van's side window. For future updates, follow @thirdmanrecords on Twitter.

• Perez Hilton spotted Lady Gaga dining at Lamberts, raising speculations that dance-pop's monster queen might be performing at the blogger's SXSW bash at the Austin Music Hall on Saturday.

• Big Easy Express, the documentary screening and performance by Mumford & Sons and Edward Sharpe & the Magnetic Zeros on Saturday, has changed tracks from Austin High School to the LBJ Lawn on the UT campus. RSVP: www.myspace.com/bigeasyexpress.

• SXSW 2012 will be remembered as the year hip-hop finally took over. Kanye West returned to the fray late Wednesday night, making an appearance – along with MC Hammer and Big Sean – at the Belmont for the 30th anniversary celebration of New York City's SOBs nightclub. Likewise, Wiz Kalifa joined Chevy Woods at the Knuckle Rumbler party, and Drake was heavily rumored to appear at Lil Wayne's Young Money showcase at the Austin Music Hall last night.

• Hospitality at the Paste party: Postgrad indie rock from Brooklyn that complements the Merge Records catalog like coffee and cigarettes.

• Rich Aucoin at the Stage on Sixth: Compelling Canadian electro-pop with more party tricks than the Flaming Lips, including but not limited to a parachute, a confetti gun, and slide-show projections.

• Ben Howard at the British Music Embassy: Emotive indie-folk as commanding as Mumford & Sons but with the plaintive appeal of Glen Hansard or early Damien Rice.