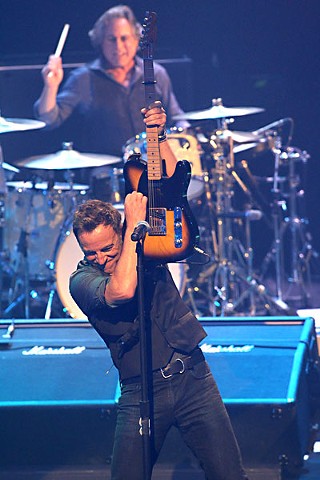 
If Bruce Springsteen's keynote was his state of the union address, the Boss' official showcase at ACL Live at the Moody Theater was a declaration of revolution, if not war. His latest, Wrecking Ball, is a personal reckoning, an election-year treatise by a man in search of his country, his god, and his place between the two – of hope tattered and bruised but not abandoned. For Springsteen, 63, answers are found onstage, and his more than two-hour performance proved an act of profound and assured deliverance. It began with a tribute to Woody Guthrie on the occasion of his centennial, "Ain't Got No Home," a folk ballad that swelled into a march of solidarity 17-strong, setting the tone for an evening of great recession protests. Wrecking Ball opener "We Take Care of Our Own" sounded not like an anthem but rather a condemnation of compromising politicians, with Springsteen forcefully punching down chords and following suit with the title track's fighting words: "Come on, take your best shot/Let me see what you got." In only the second engagement behind the new album, the E Street Band – bassist Garry Tallent, pianist Roy Bittan, guitarists Steven Van Zandt and Nils Lofgren, vocalist/wife Patti Scialfa, and drummer Max Weinberg, among other veterans – certainly rose to the occasion, bolstered by a fivepiece horn section with two saxophonists stepping into the large shadow left by the late Clarence Clemons. "We've lost some old friends, and we've got some new friends," Springsteen noted early, "but the mission of the mighty E Street Band remains the same: to wake you, shake you, and bring you to higher ground." To that end, nephew Jake Clemons kept the Big Man's legacy alive with pride, stepping confidently into the spotlight for "Badlands" and "Waitin' on a Sunny Day." Rage Against the Machine guitarist Tom Morello joined in on three separate occasions: Irish eulogy "Death to My Hometown," hard-times lament "Jack of All Trades," and "The Ghost of Tom Joad," the latter taking the form of a Wild West duel between Springsteen and the Nightwatchman – all shadows, cinder, and gun smoke. While there was an underlying theme of struggle (the Smithsonian prison folk of "Shackled and Drawn" and Southern Gothic "Seeds"), the show concluded with jubilant healing in September 11 tribute "The Rising" and rousing Wrecking Ball closer "We Are Alive." Reggae legend Jimmy Cliff joined for the encore with a spry rendition of "The Harder They Come," and though the encores would continue on for some time and swell to include Eric Burdon and the Arcade Fire, it still made for a perfect ending, a rallying cry for the ages.

"We Take Care of Our Own"

"Death to My Hometown" (with Tom Morello)

"My City of Ruins"

"Jack of All Trades" (with Tom Morello)

"Waitin' on a Sunny Day"

"The Ghost of Tom Joad" (with Tom Morello)

"Land of Hope and Dreams"

"The Harder They Come" (with Jimmy Cliff)

"Time Will Tell" (with Jimmy Cliff)

"Many Rivers To Cross" (with Jimmy Cliff)

"We've Gotta Get Out of This Place" (with Eric Burdon)

"This Land Is Your Land" (with Joe Ely, Arcade Fire, Alejandro Escovedo, and Tom Morello)