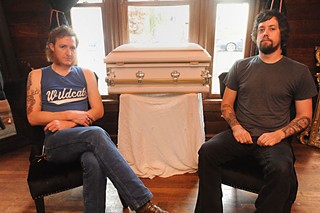 "Last time we got pulled over on tour, the cop asked what kind of band we were," says Not in the Face's singer/guitarist Jonathan Terrell from behind the wheel of the duo's diesel van. "We said, 'We're a country band' and he let us go."

From the locals' tour playlists – Gary Stewart, Alabama, and when in east Texas, 104.1FM the Ranch – you'd believe they are. In the backseat, the tattoo of Wes Cargal's drumsticks on a practice pad underscores John Anderson's 1991 hit "Straight Tequila Night." He's disciplined and meticulous, the kind of guy who practices on the way to the show and compares his drum style to "putting on a 15-year-old pair of Levi's." Big white vans are familiar territory for Cargal, who grew up touring the motocross circuit and previously hit the road with rockers White Rhino.

Tonight, they're at Fast Freddy's, a dump of a pool hall in Longview, right around where Terrell and Cargal grew up. The hometown crowd watches the pair detonate a possessed version of Screamin' Jay Hawkins' "I Put a Spell on You" and goes crazy for explosive original fare like "Downtown Girl," which showcases Terrell's soulful and textured singing. The unhinged abandon emanating from the twosome is purely emotional. Terrell's six-string work, while frenetic, is no thrash job but rather a thing of precision and carefully cultivated taste. Cargal looks like Mitch Mitchell: a whirlwind of fills and build-ups, bringing the jam to complex heights and dropping it into a swinging, swaggering pocket of rock & roll thunder.

"I think people are moving away from playing an instrument," he says. "They just go home and write a bunch of shitty beats on the computer. I think it's rude to every band that's out there playing the bass and playing the drums."

Cargal concurs: "It's sterile. There's no soul in it anymore. That's a big thing to us. We play hard, with soul, and push the boundaries of what we can do as a twopiece." 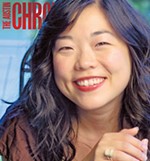 Life Is Terrible ... and Triumphant for Portrayal of Guilt
Metallic punk trio drop a sophomore rager of pandemic frustration and societal grievances