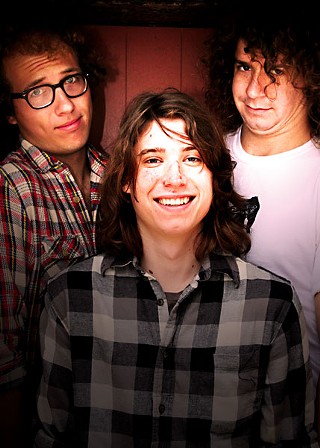 Amid the nascent pop scene emerging in Austin over the past few years, Marmalakes has found its music at an ideal intersection, balancing exuberant live shows and contemplative, intelligent songwriting. The local trio of Chase Weinacht, Josh Halpern, and Max Colonna, all in their early 20s, delivers folk pop with both a youthful restlessness and eye for detail.

"We're certainly surrounded by an energetic and enthusiastic group of creative folks," offers Weinacht. "As far as impressions, I honestly don't believe that anyone in our community of bands would say their No. 1 goal is 'I want to be famous.' I think the general feeling of all these folks is 'Let's make the best music we know how to make.'

"These bands – Mother Falcon, Little Lo, Hello Wheels, the Sour Notes – we're all playing with pop structures unabashedly. We're all working hard. As far as how Marmalakes fit it into it musically, I think we're wordier than most."

That focus on the live experience and investment in nurturing a scene has helped build an impressive community of both musical collaboration and fans, capped lastmonth at the Mohawk with Marmalakes' split 7-inch release with fellow locals the Sour Notes. With an eye toward releasing its third EP in April, Marmalakes continues to hone its sound, building on 2010's impressive debut Wonder Winds and last year's more adventurous arrangements of Even Clothed.

"The reason our second EP is a bit more exploratory is because we had a better idea of what it means to put together a record," Weinacht surmises. "Since we'd been a live-oriented band for a good while, with Wonder Winds we wanted to try to present our live energy while at the same time keeping it interesting enough for some replay value.

"With Even Clothed, we were able to play around a bit more. I think we felt more adapted to the studio environment altogether, and due to the opportunities we've been given to play lots of different kinds of shows, we've made a handful of different arrangements of each song, and with the Even Clothed version we felt we had to be definitive."