One, Two, Tres, Cuatro: This Monkee Went to Heaven 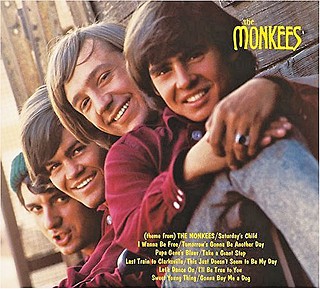 Rock & roll took a hard hit last week with the death of the Monkees' Davy Jones. The phrase don't sting as hard now in light of box sets devoted to the genre, but when the Monkees appeared on television in the fall of 1966, the band was considered bubblegum pop – inconsequential and for teenyboppers like me. Even though I graduated into an unshaven, vegetarian, commune-living nature girl (for about six weeks) within four years, my eighth-grade year (1966-67) was pure-dee Monkee time.

As Rhino Records' exhaustive cataloging of the Monkees proves, the quartet's history is remarkably well-documented because it was media manufactured. Decades of rock-scholarly examination determines that yes, the casting for the network sitcom was random, but the music was substantial in composition, execution, and retrospect. So here's the confession, Mom. That first Monkees album you and Dad gave me for Christmas when we lived in San Antonio, the one I wanted so desperately? I owned it for a couple of days only.

I was 12, and it was my treasured gift, requested and anticipated, and so I carried it reverently with me to the North Star Mall where I was meeting up with junior high pals Sophie and Teri, ostensibly. In my reality, the idea was to walk around and have a boy see me carrying it. The boy would be overcome by my incredibly good taste for liking the Monkees, and we would start chatting in that innocent adolescent way until the youthful flame of desire sparked and we ended up going steady. All because of the Monkees.

Although this was my tested way of meeting boys, it didn't occur to me that more girls liked the Monkees than boys, who preferred the harder sounds of ? & the Mysterians' "96 Tears," Count Five's "Psychotic Reaction," and anything by Eric Burdon & the Animals, who were on a roll with "When I Was Young." Yet I clutched the album as we circled the mall, the weekly ritual accompanied that holiday by cheesy Muzak. We stopped in the bathroom.

The three of us meandered back toward Joske's, chattering about school, when I realized I was empty-handed. I raced back to the bathroom – empty, as was the stall I'd been in. It was too bare for me to spend any time looking around. The album was gone.

I panicked and assessed the immediate future. My parents would kill me for losing my brand-new Monkees album, maybe even punish me. I could take my allowance, filch money from my dad's wallet, and catch a bus back to New Orleans, where we'd moved from the previous summer and which I was still homesick for. I could live in my friend's playhouse there. It was built like a real house. No, best to bluff. I said nothing.

"Where's your new Monkees record?" inquired my younger brother Stephen a few days later. We were extraordinarily close as brother and sister, but he was capable of terrifying betrayal to the parental units when he perceived it as being to his sibling advantage.

"Hidden, so you can't scratch it and ruin it," I explained loftily, quickly imagining it secreted deep in my closet. The next day I borrowed my friend Sally's 45 of "Last Train to Clarksville" and played both sides behind closed bedroom doors, loud enough to be heard and carry on the ruse. Who else in that household had an inkling the third song was a B-side by the Left Banke and not the Monkees? Nada.

Living in Seattle in 1972, I bought a used copy of The Monkees for very cheap – a quarter – and filed it in my growing collection. Years later in Austin, Stephen thumbed through the albums.

"Oh, look at this," he exclaimed, pausing over their four cheery faces. "You've had this since we lived on Barbara in San Antonio!"

And so it was in the fading pastel light of Jones' death last week that the task of compiling names for the In Passing list during next week's Austin Music Awards (see "State of Love and Trust,") fell to me, the annual video segment kindly being produced this year by the folks at channelAustin. This list remembering those in Austin music who died since last March carries its own weight, much of it heavy with years and legacy. Attending Pinetop Perkins' funeral in Clarksdale, Miss., last spring (see "Last of the Delta Bluesmen," April 22, 2011), driving light-years from a star-studded Austin service to the spare, soulful home-going was sad, but it wasn't so hard to let go with such a rich musical legacy. Same for Hubert Sumlin when he resided with Clifford Antone, and wasn't this town honored to have both men call it home?

Pinetop comes to mind often because I have became overly fond of McDonald's mocha frappés, no whipped cream or chocolate drizzle, please. When Pinetop lived down the block from me around 2004, I would get cryptic phone calls from him.

"Would you go to McDonald's and get me a Big Mac and an apple pie?" Click.

The list for this year's In Passing distinguishes itself unwillingly with the not insignificant weight of youth. These deaths feel the most unfair, unnecessary, confusing. I wish I could tell you more about the lives of Octavis "Esbe the 6th St. Bully" Berry of Dred Skott and the League of Extraordinary Gz, Sean Morrison from Crapulence and Myra Manes, Ian Barker from the Anchor and the Butts, or Chadd Thomas of the Crazy Kings. I can't, but their friends and families – stunned and anguished – will tell you the word "why" comes up often.

Why Phil Aulie? He was 25. I'd booked his band Federal! State! Local! for a U-21 series and championed its 2010 EP I'll Put It On When I'm Dead to my editor. It was his puckish presence I recall from seeing the band live. I'd no idea he had theatrical training until I read it in Robert Faires' remembrance (see "All Over Creation: Unexpected Losses," Feb. 10), but it makes sense given Aulie's easy charm. When the farewells are a taste of what might have been, the sentiment is truly bittersweet.

None of Esme Barrera's friends seemed very comforted or consoled by the suicide of the man believed to have killed her, and her co-workers at Waterloo Records were further devastated by the death of another one of their tribe, Craig "Slippy" MacNeil. Here's how I remember Slippy: gallantly holding the door at Speak's in-store for I Believe in Everything as I interviewed bandmembers outside.

"Just tell me if you need anything," he offered in that way that makes me love Waterloo just for hiring people like him.

Death was never intended to be the recurring theme of "1, 2, Tres, Cuatro" nor the Austin Music Awards. In one sense, the In Passing video segment shown at the Music Awards is the other side of the Best New Band award. Inspired by the annual tributes at the Oscars and Grammys, this year's In Passing also took inspiration from 18-year-old Ben Breedlove's remarkable life, and we will include him in this year's tribute. His description of meeting rapper Kid Cudi in the near-afterlife resonates with a kind of truth that can't be faked or bought.

And because Breedlove had a heart condition, matters of the heart hit close to home this year, not just regarding those who passed but also those like former Chronicle writer Chris Gray and KUT-FM radio host John Aielli, making the venerable muscle a symbol of life. Speaking of which, if you're thinking about life beyond South by Southwest and/or it's been awhile since you've seen Spoon, those sweethearts are playing a fundraiser for our man Chris on April 11 at Red 7.

See ya on the other side.