Over on East Riverside Drive while visiting the Beauty Ballroom the day of its first show last week, the slap of fresh paint on the banister echoed hollowly and sawdust dappled the crocodile carpet upstairs. The sound of music in Austin last year was not measured in dBs or by going to 11; it was in the rumble of moving trucks that effectively shifted the creative heart of the music scene east of I-35.

Yes, doors were opening that evening and clubs are always a work in progress, as Chase Hoffberger relates in this issue's cover story, "We Built This City." The eastern migration began quietly years ago, before the Scoot Inn was refurbished and the Longbranch Inn opened and Justine's became the place to go. And why not? In the Fifties and Sixties, East 11th Street was happenin', baby (see "Bright Lights, Inner City," July 4, 2003):

"By the late Fifties, East 11th Street and its jog up 12th was Austin's musical destination, much as Sixth Street is now. 'Lit up like Broadway,' is how some describe the snaking blocks of clubs that attracted jazz, blues, and R&B players of every caliber. Clubs with names such as the Clock Lounge, Good Daddy's, the Palladium, the Shamrock, Slim's, and Steamboat attracted a lively following. Like Harlem, the scene jumped with lines to get into clubs, flashy cars, and well-dressed patrons of every color out for the weekend stroll. For a young musician like [Blues Boy] Hubbard, it was heaven."

I wrote that in 2003, and if I were writing it today, one phrase would read, "Much as Sixth Street was in the Eighties and Nineties, before it was dumbed down by the inevitable grip of progress and the almighty goddamn dollar." The directional shift is economic, no question, but there's more at work here than money. The clubs in and around Red River have pulsed with Austin's lifeblood for decades, the true creative centers for musical expression simply because they offered affordable real estate conveniently located where no one else wanted to be. Now "people" want to be there, so move those dirty, blue-jeaned asses out of the way for the new, pressed-jean asses.

Driving under the freeway and down East Sixth last Saturday night, I found the streets lined with cars, nary a parking spot in sight. James McMurtry and his band were at the Gypsy Lounge, on a short block between Onion and Comal streets that also houses the Volstead Lounge, Hotel Vegas, a parking lot, and longtime neighborhood bar La Perla. Across the street sits the venerable Cisco's and Nuevo Leon restaurants. Tucked in the alleys are food trailers – the street gave off an electric hum.

January 2011 I house-sat for a friend who lives around the corner from Sam's BBQ on East 12th. It was the bright spot of that week when everything froze. It reminded me of when I'd lived in the neighborhood in the Seventies and Eighties. No car, broke – dependent on a bus system that stopped at 10pm for getting to the grocery store and hauling clothes to the Laundromat. I walked a lot and bummed a lot of rides, with the occasional taxi splurge. Last weekend, East Sixth reminded me of Austin before the neon storm.

"Like when Steamboat had those 'secret shows' and Eric Johnson would show up," Mike Villegas reminisced Saturday.

Like standing outside the One Knite's coffin-shaped door while Little Stevie Vaughan played to 41 people in 1973. Like being down on the Drag in 1979 when Raul's bubbled with life. Like hanging around outside Club Foot and Liberty Lunch in the Eighties, watching the cars go by while the Butthole Surfers ripped it up inside, feeling the music in the air. Like the Red River revival of the early Nineties, when every purposeful step on the sidewalk brought you closer to nirvana. Even the cold felt good last weekend; just pull up the collar and stuff the hands a little deeper in the pockets. Look, here's the White Horse! 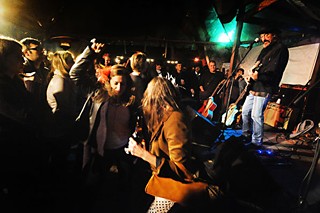 I fantasized on the phone Monday morning with Susan Antone about starting a hot dog trailer in an open lot with a stage for U-18 bands (my idea) and calling it Cliffy's. Or CJ's or Little Clifford's or something like that. What kind of crazy do you have to be to want to open a club?

Mike Villegas opened the Gypsy Lounge "one year and two months ago," he pondered, sitting on a couch below a TV showing The Misfits. Onscreen, Marilyn Monroe whacked a paddleball for Clark Gable and a bar full of leering cowboys. Inside his own bar, the veteran drummer for the Ian Moore Band was very aware of what the changing face of East Sixth means not only for local music, but also for the neighborhood. He bought a house just blocks away and knows full well the impact an increased influx of people has on the community.

"It's a little of the old 'Be careful what you wish for,'" he smiled, taking a break from coaxing to life the cranky propane heaters by the outdoor stage. Even a crack staff doesn't lift the weight of ownership. He's talking, but his gaze scans the cozy, red-lit interior in regular intervals, like the ultimate pit boss. The inside holds about 80, but the outside holds three times that easily when set up as it is for McMurtry.

"There's definitely a different vibe on the weekends; it changes then," Villegas observed. "During the week, we get a lot of people who live around here. And this is still uncharted territory. It reminds me a little of the Lower East Side in New York, with cool bands and underground clubs. There's a lot of freedom around here."

He has a point. The strip of clubs along East Sixth feels more familiar to anyone coming to Austin from major cities or Europe than the antiseptic whitewash of Sixth Street west of the interstate. "Where is your city?," a Dutch friend kept asking, walking around Downtown during South by Southwest some years back. When we looped across East 11th Street and passed by the Texas Music Museum and the Victory Grill, he lit up. "Here's your city!" I think he meant he was seeing black and brown faces in numbers he expected, but whatever it was, he seemed content that he had finally seen the "city."

Success will mean growth, and that means growing pains for the residents too, not to mention the increase of SXSW activity east of the freeway.

"I thought, 'Yeah, I know how to prepare,'" recalls Villegas of the Gypsy Lounge's first SXSW last year. "They were banging on the door at 9am on St. Patrick's Day. Come this spring, it will be a madhouse."

Already, the Gypsy Lounge finds itself having to make accommodations for an act like McMurtry. Tonight, both indoor bathrooms are marked: "For this event, Women Only. Men's restroom located outside – Port a Potty." At the far end of the deep lot, through the stage area tented for weather, is the florescent-lit Dot's Spot advertising exotic combos like the Chutney Curry Chzburger.

East Sixth isn't for everyone. It's a little funky without the frat-crowd lures and killer drink specials. But it's local music being played in clubs willing to take chances and that's good Austin mojo.

Meanwhile, a rumble of applause and a surge toward the back door followed by an electric twang meant James McMurty and the band had plugged in. Showtime at the Gypsy Lounge.