The best holiday card I got this year came from the Rock and Roll Hall of Fame, blissfully unaware of my recent potshots at its process (see "One, Two, Tres, Cuatro: I Love Rock & Roll," Dec. 2). So, we'll happily do a victory dance for Freddie King before we go back to pleading for Doug Sahm and the 13th Floor Elevators next year. Remember, if they're passing over those folks, the Butthole Surfers don't have much of a chance down the way. And, by the way, Stevie Ray Vaughan is not in.

But Billy Joel is.

It became clear some years back that the Chronicle's Texas Music Hall of Fame carried with it a responsibility to live up to the name, so we nominated folks such as Ernest Tubb, and they were quickly voted in. Nevertheless, the announcement in October of a statewide Texas Music Hall of Fame (www.texasmusichof.com) liberated our Hall of Fame and has enabled us to refocus it on first and foremost, those artists whose careers have had a significant effect on Austin music, and second, those acts that spent a reasonable amount of time woodshedding locally. That's it.

That's what distinguishes the Chronicle HOF from the Austin Music Memorial, for example, which honors such names as the very talented Damita Jo. Vocalist Damita Jo was born in Austin in 1930, but she did not have any palpable effect on the growth and development of Austin music in leaving behind a sterling jazz-pop legacy. That's what I don't get about the Rock and Roll Hall of Fame. The music is either rock & roll – a broad generalization, sure – or it had an effect on the development of rock & roll.

With that in mind, here are our nominees for this year's Austin Texas Music Hall of Fame. Not the right choice for you? Have at the ever-popular fill-in-the-blank form on p.42. Big show in March, doncha know.

Joe "King" Carrasco placed into our Hall of Fame years back for his decades of Tex-Mex rock, reggae, and soundtrack work, but only with the Crowns beginning in 1979 did he eventually become one of the original MTV darlings. The band, which reunited this year, plied a colorful, upbeat border rock dubbed "Nuevo Wavo" with Kris Cummings' Farfisa organ putting an 1980s spin on the San Antonio sound of Augie Meyers' Vox organ of the 1960s. The band recorded on prestigious UK punk/New Wave imprint Stiff Records.

Among those few who count five Grammys on their shelf, Cindy Cashdollar is an even rarer talent, in demand for her roots-based Dobro and steel guitar playing. In addition to a lengthy local tenure with Asleep at the Wheel, Cashdollar has worked with Bob Dylan, Van Morrison, Rod Stewart, Daniel Lanois, Marcia Ball, and BeauSoleil. Her 2004 solo debut, Slide Show, featured six-string giants Herb Remington, Jorma Kaukonen, and Redd Volkaert (see "Cindy Cashdollar Reviewed," April 9, 2004).

That lush L.A. sound that netted the Christopher Cross band no fewer than five Grammys – including Best New Artist in 1980, plus an Academy Award and a Golden Globe – was strictly an Austin concoction overseen by engineer Chet Himes. "Ride Like the Wind," "Sailing," and the Oscar-winning "Arthur's Theme" weren't just massive hits; they practically invented the adult contemporary radio format. Not bad for a bunch of Austin and San Antonio boys, including Cross, Andy Salmon, Rob Meurer, and Tommy Taylor.

Girls in the Nose

The 1980s made it possible for Girls in the Nose to come out swinging. Their loose-hipped folk-rock expressed lesbian life in a way not even successors Two Nice Girls could do. GITN's two cassettes, 1990's Girls in the Nose and 1992's Origin of the World, remain a treasure in Austin music, espousing free feminist thought via singer and founder Kay Turner's expressive arrangements and inspirations. Nice Girl Gretchen Phillips, and later Darcee Douglas, passed through GITN's ranks as well.

In just over a decade, Grupo Fantasma has perfected its Latin-fueled big-band jam-funk, so much so that the 10-piece local DIY ensemble took home a Grammy this year for its most recent CD, El Existential. Led by multitasking mastermind/guitarist Adrian Quesada, Grupo Fantasma's horn-driven exuberance transcends language barriers and dance handicaps (see "Salsa, Cumbia, Merengue, Everything," June 13, 2008). Grupo has performed alongside Los Lobos and KRS-One, and even hosted Prince at the Belmont.

Like Lucinda Williams, Patty Griffin takes her art personally, a dedication that made her transition into the upper ranks of singer-songwriters seamless (see Dave Marsh's May 17, 2002, Chronicle cover story, "1,000 Musical Kisses"). Major label breakthrough Flaming Red in 1998 made her a buzzword in Nashville, Tenn., but falling dominos 1000 Kisses (2002), Impossible Dream (2004), and Children Running Through (2007) meshed beautifully into 2010's Downtown Church.

Though originally from La Grange, Gloria Jean Brown-Manor played guitar and led Jean & the Rollettes in Austin from 1959 through the 1970s. The Rollettes ran the gamut of Eastside venues musically speaking, performing R&B and soul tunes at the Victory Grill and Charlie's Playhouse, also bending notes on bills with Johnnie Taylor, Joe Tex, and Freddie King. Brown-Manor died in 1999.

Although Bob Schneider played in bands in his teens, Joe Rockhead was his first local, post-collegiate success, all but defining the burgeoning Sixth Street scene of 1990s Austin with a funk-rap-rock outfit that presaged the jam band aesthetic of the H.O.R.D.E. era. Hugely popular on the Steamboat/Black Cat axis along with peers including Soul Hat and Little Sister, Joe Rockhead set the stage as the next stepping stone to Schneider's Scabs, the Ugly Americans.

Poi Dog Pondering immigrated to Austin from Hawaii in the late 1980s, bringing with it a tropical beat that fused organically with percussive Texas rhythms. Led by singer and principal composer Frank Orrall and giving rise to such local talents as Abra Moore, Susan Voelz, and Bruce Hughes, the multiethnic, mixed-gender band captured Austin's zeitgeist with a self-titled debut, Wishing Like a Mountain and Thinking Like the Sea, and Volo Volo. Orrall and Poi Dog Pondering are now based out of Chicago.

Michael Ramos boasts a lengthy career that's seen him at the microphone and as a first-call multi-instrumentalist, primarily on keyboards. His résumé includes stints with the Rembrandts, the BoDeans, John Mellencamp, Paul Simon, Los Lonely Boys, and Patty Griffin. Ramos has been working his Latin chill-out project Charanga Cakewalk since the mid 2000s (see "The Zen of Revolution," Aug. 18, 2006), this year releasing its third and perhaps best album, El Brown Recluse (see "Texas Platters," Nov. 18).

Before cowpunk even had a name, Rank & File blazed the frontier in the early 1980s with brothers Chip and Tony Kinman riding shotgun with ex-Nuns punk/glam rocker Alejandro Escovedo. The group's first two LPs, 1982's Sundown and Long Gone Dead two years later, garnered rave reviews, but Escovedo left the band to form high-octane local rockers the True Believers. RAF reined it in after an eponymous third release in 1987.

Steeped in psychedelia and unfettered by convention or volume, 16D flipped the local switch on the 1990s indie-rock revolution happening worldwide with the neon noise-pop that eventually got them signed to Warner Bros. Records. Beginning in 1994 until they flickered out at the millennium, Carrie Clark, Chris "Frenchie" Smith, Jeff Copas, and Steven Hall dazzled Austin's best stages (Liberty Lunch, Emo's, the Electric Lounge). Trance Syndicate debut Backfeed Magnetbabe (1995) and major-label bow Emits Showers of Sparks (1998) are definitive.

A solidly blues- and soul-based outfit led by bluesman W.C. Clark and singer Angela Strehli, Southern Feeling boasted hippie roots in its early 1970s origins. The band depended mostly on covers but performed some originals, such as Strehli's "Your Sweetness." This is the band Clark "retired" from, working as a mechanic until Stevie Ray Vaughan asked him to start Triple Threat Revue, which became Double Trouble. 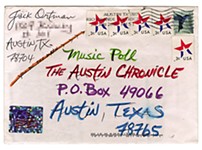