Carson Brock's grandmother is looking out for him, and other tales from the 'bless their heart' file 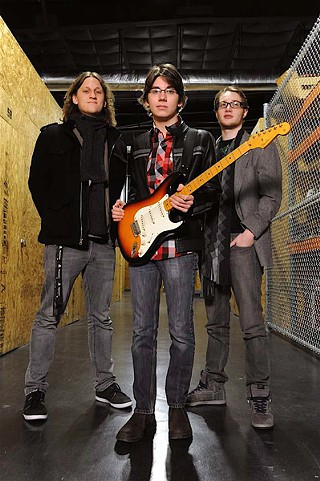 "Would you talk to my grandson?"

That was the essence of the email from Carson Brock's grandmother, Janet Ogden. Besides the fact that I enjoy helping young musicians, any time a grandparent asks for assistance, I stop what I am doing. This time, perhaps a bit sheepishly, Carson agreed to meet me at Central Market Westgate.

I've been watching and encouraging Carson's career for several years now, having booked him in a series called Next Up when I had time to indulge my interest in booking teen bands. It obviously never occurred to me in my younger days of rock & roll debauchery that I might one day be cheerleading youth musicians and fielding inquiries from grandparents, but then again, that started back in about 1982, when I came across 15-year-old Monte Warden at the Lubbock Hilton during the Joe Ely Tornado Jam. (See Monte on Friday at the Continental Club in his forever youthful country vehicle the Wagoneers.)

Monte never wore "Little" as part of his moniker, not like David Murray did in mid-1970s Austin when the Cobras would sneak him into Soap Creek Saloon (see "Ten Fingers," Dec. 2) through the side door to play a quick song before George Majewski kicked him out for being underage. David had inherited the handle from Little Stevie Vaughan before passing it on to Charlie Sexton and Doyle Bramhall II in the Eighties. The last time we saw it used was on Jake Andrews in the 1990s. Gary Clark Jr. got lucky – he already had a "junior" title to give him the young man's blues. And Clark, who made his debut on Letterman's Late Show last Friday and placed high on Rolling Stone's year-end list of best recordings, is posed for the kind of stardom that only comes along once in a decade.

Carson's never had to wear "Little" either, in part because he came along in a generation of musicians under 21 who didn't need to act their age musically. A senior at Lake Travis High School, he won't be 18 until February, but with his two bands Public Soul and the Carson Brock Group, there's no question he's in the first line of Austin guitarists of his generation. Some of this is genetic – his father, Kyle, has played bass for Eric Johnson for years – and some of it's environmental, but with 18 staring him in the face, he's upping his game now.

At Central Market, I arrived early and found Corey and Mike Keller confabbing over a laptop "about a plan." The brothers laughed. It was sheer luck that while meeting me, Carson could meet his future in person: The Keller brothers have been performing together for nearly a quarter-century and are only in their mid-30s. They know what it's like to answer the lure of the blues and find that your fans are much older than you. And in a way, their goals haven't changed.

Drawing listeners is incumbent for acts of all ages, and if Carson feels like he's waiting on his second act, he's wrong. He's just finished the audition. On Public Soul's new EP, he works with some of the Blues Mafia, another act that's spawning names that will be here for a very long time – Sasha Ortiz spun off to sing with T Bird & the Breaks a few years back. The woodshedding includes regular gigs at Antone's over several years.

Carson may find he'll lose the security of being "under 18" and the forgiveness it affords. Having to define your niche in a town known for guitarists is its own challenge, like taking a seat on that long, long bench that comes with a ticket with multidigit numbers. And if, as we all agreed at Central Market, the game of playing live has changed, that's to be dealt with, too.

It's tempting to offer luck, but as one of the next-in-line Austin guitarists, Carson Brock actually has a great deal going for him with the new EP. He's prioritizing the right way as he finishes high school in the spring, and has plans for the Carson Brock Group, too. Plus, he just opened for Oz Noy at the Saxon Pub and Eric Johnson showed up.

Now, let me tell you about Yayo Sanchez, poised as not just a guitarist but heartthrob, or Glenn Peterson from Bastrop, who is 14 years old and has played with Pinetop Perkins, Buddy Guy, and B.B. King ....

For his 37th birthday on Sunday, Chris Gray lived, bless his heart. That's an important distinction since the former Chronicle columnist turned Houston Press music editor almost died of a massive heart attack in Houston on Oct. 28. Chris Gray did die. That's his dead body being hauled off the Metro tracks in that jerky security camera video when the auspicious presence of Metro officers skilled in CPR saved his life. Bless their hearts.

Bless your heart. It's such a Southern, mint julep phrase, but it's a kind sentiment. It's also a potent reminder that while myriad organizations tout the benefit of various organs, good health starts – and stops – with the heart. What happened with Chris? Smoking cigarettes, poor diet, the wrong sort of exercise – that's pretty much it. It was nothing romantic like a childhood disease, just blocked arteries and a lifestyle that's all too familiar to most of us here in the music community, along with the mounting medical bills.

On Jan. 14 at the Continental Club in Houston, some of Chris Gray's favorite musicians will gather to help out that afternoon, among them James McMurtry, who responded to the request immediately, bless his heart. And a visit to the American Heart Association offices last week taught me that the Bee Gees' "Stayin' Alive" is the perfect beat to apply CPR, something we'll try to demonstrate that day with willing musicians.

Also in the "bless their heart" category is Chuck Lokey, owner of Encore Records, Video & Apparel on West Anderson Lane. A local merchant of movies and music in Austin for going on three decades, Lokey was distraught last week at having to close Encore. "We have battled the giants of Blockbuster, Hollywood, Netflix, and iTunes," emailed Lokey last Friday (see "Encore Records Closing," Earache! Music blog, Dec. 16). "We have put in long hours at little or no pay for over 27 years in four different locations. The economy, the Texas drought, and the giants have taken their final toll." Asked when Encore's storewide sale begins, Lokey responded, "When the Chronicle comes out Thursday."

Few phrases annoy me more than "stocking stuffer," because I picture myself stuffing endless amounts of cash into a stocking with a big hole in it that empties into someone else's pocket. Nonetheless, my favorites this year include the annual KGSR Broadcasts Vol. 19 (especially its Brady Bunch-style cover art) and a new addition to the compilation crew, the Holiday HAAM Jam CD. HAAM Jam features tracks from Jon Dee Graham & the Resentments, Shelley King, David Garza, Dan Dyer, Tortilla Factory, Laura Scarborough, and more.

A limited release picture disc from Shiva's Headband, The Singles Collection, is out and features the vintage local psych band's four 45s and three unreleased tracks. Order from the website (www.bluethroatmusic.com) – the only place you can get it – and you receive a free T-shirt. Both make for a short history of Austin. Shiva, a wildly progressive act that was putting violin in rock at the same time as the Velvet Underground, was the first local rock act signed to a major label.