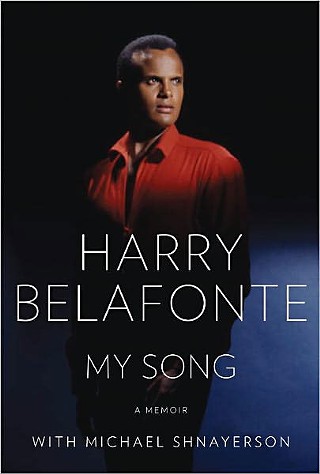 
Harry Belafonte's extraordinary memoir opens with a chase scene. In the middle of the Mississippi Freedom Summer and on two days' notice, the author raises and hand-delivers $70,000 in emergency funds for the Student Nonviolent Coordinating Committee, an integral civil rights group, while being terrorized by the Ku Klux Klan. "From behind us, the first pickup truck sped up and started to pass us. Through the rear window, we could see it had a two-by-four across its grille – a makeshift battering ram – and no license plate. ... That was when we heard the shots, a dozen or more." A lifetime veteran of the lecture-hall circuit and UNICEF's former goodwill ambassador, Belafonte certainly knows how to make an immediate and lasting impression. My Song follows suit with prose that's fluid yet intensely detailed, no doubt aided by co-author Michael Shnayerson, longtime contributing editor for Vanity Fair. Though he's known as the "King of Calypso" after becoming the first artist to sell more than a million albums with 1956's 31-week chart-topper Calypso, that's a footnote in Belafonte's remarkable life: a poverty-stricken childhood torn between Harlem and Jamaica, enlistment in the U.S. Navy while still in high school, studying alongside Marlon Brando at Erwin Piscator's Dramatic Workshop, earning a Tony Award for John Murray Anderson's Almanac on Broadway, getting blacklisted during the Red Scare, and becoming television's first black producer for Tonight With Harry Belafonte. And that's just the early years. Belafonte chronicles each milestone and the racism he overcame in the process. There's an undertone of arrogance at times – a keen awareness of his greatness and place in history – but it's never overbearing. After all, it's not bragging when it's true.