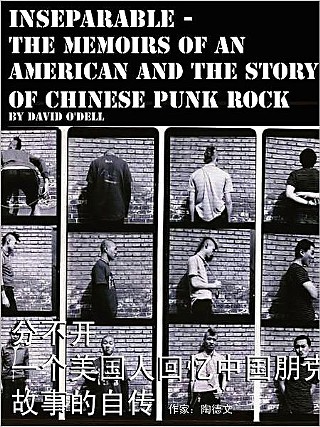 
In the early 1990s, David O'Dell published a hilarious local zine called Asian Girls Are Rad out of the 21st Street Co-op. Austin was rife with two-color, Kinko's copy bombs back in those inky pre-Internet days, but A.G.A.R. stood out in large part thanks to O'Dell's heart. This wasn't another skeevy list of fetishistic diatribes, but an ongoing peek into O'Dell's life, of which his love of Asian chicks and punk rock were two ongoing facets. By mid-decade, O'Dell and A.G.A.R. had vanished. As it turns out, he had hightailed it to Beijing under the auspices of UT-affiliated Council on International Educational Exchange, a study-abroad organization that allowed O'Dell to head east (Far East) to advance both his education at Beijing University and witness, firsthand, the utterly mind-bending birth of Chinese punk. He was, in a sense, the midwife, having brought with him a trove of Austin punk rock knowledge and attitude. Inseparable chronicles, with no small amount of heart, O'Dell's passion for the squalling Chinese music scene. As the subtitle suggests, it's a true memoir, not only detailing the minutiae of the formative years of Chinese punk rock but also of coming to grips with daily Beijing life: "I became used to my new Beijing life. The nosebleeds, the salmonella, the stench, the trash, the hacking black mucous cough. ... Beijing was no rules to me, an imaginary step back in time to the American Wild West where survival meant living in a stew of brutality, filth, and ingenuity." Birthing a screaming, abrasive babe like punk in a Communist country that had not so long before witnessed Mao's bleak and deadly Cultural Revolution – and Tiananmen Square – was nothing short of a revolution in and of itself. O'Dell's far-ranging personal story intertwines with it all, the emergence of the first Chinese Oi! band – the Anarchy Jerks – plus hardcore punk outfit Brain Failure and the myriad clubs and subscenes that sprouted across the provinces like spike-haired shiitake mushrooms after a three-chord thunderstorm. Inseparable is both punk rock anthropology and a deeply moving tale of life in a foreign land made less so by the common tongue of punk. Which, contrary to unpopular opinion, never quite died but instead went viral and all the way to the rainy backwaters of rural China.