I left my heart in Warsaw

On the underside of Wawel Hill in Kraków, Poland, the skeletal bronze statue lights up every five minutes, keeping alive the 12th century Polish folklore of the thunder lizard Prince Krakus stepped to as dragon slayer. Smok/Smaug: paging J.R.R. Tolkien.

Kraków's lookout point, Wawel Hill – in Polish the W is pronounced as a V – is the seat of the former capital's castle and cathedral. Centuries of royal tombs stack the latter, enormous marble sarcophagi carved with fallen kings and queens and knights. Downstairs, under armed guard, lies Polish President Lech Kaczy´nski, who was killed last April with 95 others when a delegation honoring World War II Polish POWs crashed in Russia.

Walking back to the old town square on this first afternoon in Polska, high on a tall doorway, we spot a gig poster I never dreamed of searching out: Behemoth. No. 1 with a bullet belt on my Polski hit parade.

Trumpeter Tomasz Stanko and his decades of jazz balladry for ECM Records, the Iron Curtain Catholicism of Polish film posters, and just this month, the Criterion Collection's DVD box of Krzysztof Kie´slowski's Three Colors film trilogy: Polish touchstones all. Zbigniew Preisner's soundtrack for Kie´slowski's luminous The Double Life of Véronique, and all his film scores for the late Decalogue director, plucks a classical haunting of the chapel.

John Lennon headbanger "Polythene Pam" from the Beatles' Abbey Road, the first album I ever bought, proved my gateway to Kiss, Led Zeppelin, AC/DC, Thin Lizzy, Scorpions, etc. In college, 1983-1987 – after the latter act's Love at First Sting – I scrapped my air guitar, returning the Columbia House 13-tapes-for-a-penny selection of Metallica's Master of Puppets with a note: "This isn't music." Twenty years it took me to catch up on 20 years.

Built in Gda´nsk, Behemoth had likely played Austin before. "I'm not sure," wavered Adam "Nergal" Darski, "black emperor of Behemoth" as credited on 1994 debut And the Forests Dream Eternally, in advance of an Emo's follow-up last year (see "Alas, Lord is Upon Me," Earache! Music blog, Jan. 7, 2010). That twilight set at Stubb's, lit by torches and the setting sun – flanked by Slayer-like steel stage standards bearing a Polish national eagle with two heads – Darski and his corpse-painted body armor division made metal fun. And heavy as all Hades. The veteran showmanship Darski demonstrated and the precision of his group recalled peak Scorpions and their frontman, Klaus Meine.

"Why did the Germans harbor such hatred towards the Polish?" I ask our guide the next day at Auschwitz-Birkenau concentration camp, 90 minutes south of Kraków by bus. Her family long native to the region, which today "lives in the shadow of Auschwitz," she reveals that Germans and Poles get along famously now, but Poland remains a vital point of transit interchange in Eastern Europe. A Polish man steps forward and points out the region's abundant food productivity. Our next night's train from Kraków to Warsaw tracks nothing but farmland.

Location, location, location sealed Poland's monstrous fates, but Warsaw rises like a phoenix from the Holocaust. Kraków miraculously escaped destruction even though its Jewish district – where a Tomasz Sta´nko poster peels off a back-alley wall – is ghostly absent. Warsaw rose from rubble into Soviet occupation now modernized as urban hip ("Stalin's wedding cake" is one nickname for its Palace of Culture and Science). Kraków's the East Village, while Warsaw's all of New York City, or as KUT's Jay Trachtenberg put it, the Paris of the East. They're a fierce people, the Polish, hardened survivors with their heads held high.

Friday, Oct. 14, our last day in Warsaw and Poland, Behemoth played in Kraków. A week later when we were home in Austin, Behemoth ended its 20th anniversary tour in Warsaw. Agnieszka and myself and 50 others had been serenaded by the Cracow Chamber Orchestra animating Vivaldi's "The Four Seasons" in a baroque church, and in Warsaw she and I tracked down Chopin's heart, but Behemoth's Phoenix Rising Tour eluded us.

Only a month earlier, Darski had been cover boy of the Polish Newsweek. While touring Behemoth's ninth and best studio LP, Evangelion – eight months after we'd spoken – he was diagnosed with leukemia. "Blackened death metal" translates as "cult" in the U.S., but it's a forked tongue spoken globally, and its platform helped locate a bone marrow donor for Darski that December. His appearance this fall on state TV for the Polish version of The Voice ended after he reportedly dressed as a priest at Behemoth's Warsaw concert. Tearing up Bibles as show never did Darski any favors in the deeply Catholic Republic of Poland. Uwaga! proclaim caution signs everywhere. 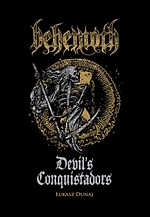 Behemoth: Devil's Conquistadors and Confessions of a Heretic: The Sacred and the Profane – Behemoth and Beyond
A lavish diary of Poland's black metal breakout Behemoth, and a book-length Q&A defense of frontman Adam Darski