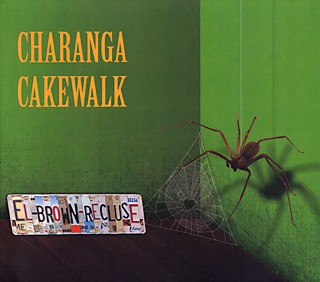 
As third album overall and first in five years for Charanga Cakewalk, El Brown Recluse takes its double entendre to heart. A multi-instrumentalist of all-star repute, Michael Ramos is the CC moniker's piñata-maker with a baseball bat, and El Brown Recluse swats it out of the park. Loteria de la Cumbia Lounge, 2004 debut for major label imprint Artemis, took after its title in hopscotching through groove-oriented chill-out cumbias with as many faces/places as an actual lotería card. Sophomore follow-up Chicano Zen two years later didn't so much take a step back as inward – head music – slinkier, more electronically insidious, and with better coalescence. El Brown Recluse makes its predecessors sound like child's play. From the percussive shuffle of opener "Too Many" to closing "Cumbia Pa Modernos," the arachnid bite here is naturally organic, the list of musicians speaking to the disc's live band chemistry: first-listed Yayo Serka on drums and percussion, Max Baca on bajo sexto, and the youngbloods, David Garza, Ceci Bastida, and Sahara Smith. Ramos leads with accordion coloring brighter than a tray of Mexican sweet breads, plus a carnivalesque array of trumpet, melodica, marimbol, and Hammond B-3 organ, with all manner of keyboards. His figurative and not literal brother Brian Ramos weighs in with guitars and killing co-write "Agua Ardiente," which sounds born out of cantina jukeboxes from here to Argentina. The head honcho and Gecko Turner's "Hey Mano, Hey Mana" swings a Caribbean mantra custom-made for Manu Chao. Front-loaded with big-fish-hook vocals, Recluse settles into its instrumental mojo midway through with belly rub "Marimbol Sublime," and suddenly out come the salt and lime. That 80-proof shot goes through the cabana roof on the Ramos' black magic hook in "Tinieblas," whose segue into the equally spellbinding "Black Mambo" practically means lights out on the party meter, its accordion calling the tune alongside Latin percussion more addictive than a churro. "Pocho," what my sweet little old Mexican grandmother accused me of once or twice, bounces as cutely as its siblings. El Brown Recluse, get bit.

Soy Quien Soy
Gina Chavez comes into her own

'American Sabor: Latinos in U.S. Popular Music'
To fully enjoy this exhibit, bring a kid and watch him become ignited by the music 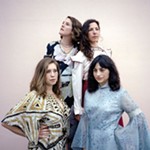