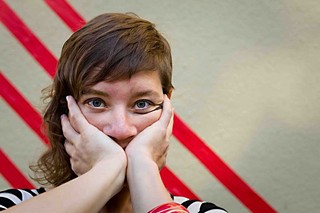 Every five years, an album comes along that won't remove itself from your brain stem. That's Whokill, second album from Tune-Yards' Merrill Garbus. Gritty urban clank on "Gangsta," the sultry NSFW slink of "Powa," and the Afrobeat clatter of "Bizness": How's a crazy patchwork of loops and cross-fade trickery like this born?

"It started just by experimenting with all the pedals," explains Garbus, who found her story in the editing. "I did the editing myself and spent a lot of hours weaving and unweaving. It's such a wonderful time of sculpting sounds. It's almost a visual art in a way."

For Garbus, such a process is like learning and relearning Coco Chanel's edict to remove one accessory before leaving the house.

"You're choosing what's heard and saying the very minimum you have to say in order to get the idea across. I don't think I'm making minimalist music, but I want to say the bare minimum of what I have to."