OTR goes country with Mike & the Moonpies and Fire Relief: The Concert for Central Texas 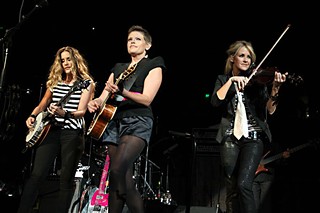 Boogie Back to Texas

Fire Relief: The Concert for Central Texas at the Frank Erwin Center on Monday night played out as a Lone Star edition of the Band's Last Waltz shotgunned like a can of Miller Lite. George Strait brought the marathon evening to a close with a freight train revue of his No. 1 hits, starting with the double-barrel of "Twang" and "Check Yes or No," but the thrust of the bill paid tribute to the communal spirit that followed in the wake of the wildfires. Indeed, the most memorable moments were shared: Christopher Cross backed by the Austin Symphony Orchestra, the G2 summit of Joe Satriani and principal organizer Eric Johnson dueling on "Going Down," special guest Shawn Colvin's stellar duet with Lyle Lovett on "Diamond in the Rough," and the Texas Tornados' roadhouse romp "(Hey Baby) Que Paso" with house band Asleep at the Wheel. After the barbed country jazz of "Still Is Still Moving to Me," Willie Nelson played new gospel joint "Roll Me Up and Smoke Me When I Die," then was joined by the Avett Brothers for the hillbilly jaunt "Will the Circle Be Unbroken" and "On the Road Again." Though rough and rushed at times, the only disappointment, aside from Steve Miller Band's cancellation, was Friday Night Lights' coach Eric Taylor (Kyle Chandler) and Buddy Garrity (Brad Leland) not leading the crowd in a "clear eyes, full hearts, can't lose" chant. Most impressive was the feisty return of Austin's anti-Antebellum ladies, the Dixie Chicks, who proved still "Not Ready To Make Nice" with modern country radio – and all the better for it. The Concert for Central Texas raised nearly $700,000 for wildfire relief. "I heard them say get your kicks on Route 66," Bastrop County Judge Ronnie McDonald remarked in regards to the Asleep at the Wheel staple. "We want you to get your smile on Highway 71, 'cause Bastrop is coming back."

From the Beatles' live farewell at Candlestick Park in San Francisco to Jimi Hendrix's kerosene routine at the Monterey Pop Festival and Johnny Cash's infamous jail bird at San Quentin Prison, Jim Marshall documented some of the most iconic moments in rock & roll history. Until fall 2014, 30 of the late photographer's finest images can be viewed on the third level of ACL Live at the Moody Theater. One image that you won't see, though, is the portrait above, taken by Michael Scott Parker, a local contemporary pop artist. The two became close friends after being introduced by Rolling Stone photographer Baron Wolman, who shot the cover of the latter's 2008 album, Naked. Parker's latest, Creature Rock, released shortly after she relocated locally from San Francisco, was dedicated to Marshall, who made a habit of passing out her CDs and introducing her to clients. "While to outsiders [Jim] could come off as rude, I truly looked up to him because he was who he was to an extreme," said Parker, who recently opened a local recording studio, the Pink Elephant. "He helped cultivate an unshakable fearlessness in me."

On a related front, Wolman sounds off on The Rolling Stone Years in an interview with Chronicle Music Editor Raoul Hernandez at First United Methodist Church, Saturday, Oct. 22, 3:15pm. That's merely one footnote of the Texas Book Festival's outstanding music lineup this weekend. Before receiving the Texas Writer Award, Pulitzer Prize-winning author Lawrence Wright and reporter John Burnett lead the local blues band Who Do on Saturday in the Music Tent at 10am. OTR and Doug Freeman take the stage at noon, tackling questions about The Austin Chronicle Music Anthology before Bob Livingston, Bobby Bridges, and Greezy Wheels. Fight Club author Chuck Palahniuk reads from Damned at the Scoot Inn later that day, while the Authors headline the afterparty. Butch Hancock prefaces Michael Ventura's If I Was a Highway Sunday (noon-2pm), followed by Terri Hendrix, Gina Chavez, and Lone Star Swing. For more, see "Power to the Pen," Books, and "Chews Wisely," Food. A full schedule is available at www.texasbookfestival.org. 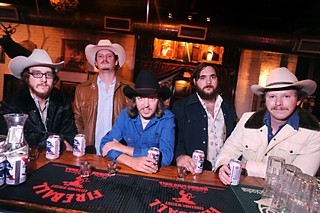 Honky-tonk music operates locally like clockwork. For starters, the Continental Club regularly hosts Heybale! (Sundays) and Dale Watson (Mondays), while the Broken Spoke boasts Chaparral (Wednesdays) and Jesse Dayton (Thursdays). Outside of South Austin, though, Mike & the Moonpies have been ruling the roost for several years now. The local outfit has self-released two albums of hard-livin' country with a rare sense of humor (see "Water on the Rocks") that goes over equally well Mondays at Hole in the Wall and unplugged on Tuesdays for happy hour at Mohawk, which also offers the Moonpie: a shot of well whiskey and a Lone Star for $3. "The songs started as jokes originally," recalls leader Mike Harmeier, a 27-year-old from outside Houston. "Then I started to get more serious ... and drinking." The band's stock has risen nationally thanks to a breakthrough session with Daytrotter and subsequent spot on the website's annual Barnstormer tour. "It doesn't matter where we play," says Harmeier. "We're a good dance band; that's what it's all about." Mike & the Moonpies break from routine next week with an appearance at Paper Cuts, the Chronicle's free live music series at the Palm Door on Tuesday, Oct. 25, sponsored by Capital Metro, Sapporo, 42Below, and Curra's Grill. RSVP and check out footage from past events at austinchronicle.com/papercuts.

Local rapper Octavis Berry of Dred Skott and the League of Extraordinary Gz died on Friday in Austin of a pulmonary embolism after struggling from asthma complications. Better known as Esbe the 6th St. Bully, Berry, 30, had a deep, Southern flow with a socially conscious edge that made him one of the most promising new Texas rappers. "Tay was a leader in the truest sense," said local hip-hop booker Matt Sonzala. "I always felt he had a real fire burning inside him."

As part of the Austin Film Festival, House of Songs presents "All I Know: The Castle Sessions," a charming documentary about the local songwriting exchange program (see "SPOT Festival," June 4, 2010), at Rollins Theatre Wednesday, Oct. 26, 8:30pm. A performance follows.

Elsewhere on the big screen, Neil Young continues his archival restorations with the Bridge School Benefit Concert Film, featuring Bruce Springsteen, Pearl Jam, and Bob Dylan, among others. The film screens one night only at the Alamo Drafthouse Lake Creek on Monday, Oct. 24, 7pm.

Red River's alternative nightclub Elysium celebrates its 10-year anniversary with a Michael Jackson-themed Thriller Throwdown on Thursday, Oct. 27 (RSVP at bit.ly/nj3GD8), kicking off a full weekend of decadent Halloween festivities. While much has been made of the Waller Creek Tunnel Project and the imminent departure of Emo's, owner John Wickham remains confident about Elysium's future. "The area has a lot more life in it than people think."

The 21st annual Entertainment Law Institute summit takes place at the Hyatt Regency Austin this week, Oct. 20-21. For a cheaper alternative, pose a question to AskaMusicLawyer.com. The "Dear Abby"-esque site is run by attorney Amy Mitchell, a former member of Til We're Blue or Destroy and legal counsel for last year's Antone's Records bankruptcy trial. Mitchell says her goal is to change the "pervasive misconception that lawyers are 'unrelatable' or 'too expensive.'"