At South by Southwest last spring, Marc Bianchi announced the end of Her Space Holiday, the project he's helmed for more than a decade and which helped usher the rise of electro-pop. HSH arguably peaked mid-decade with 2003's The Young Machines and 2005's The Past Presents the Future, two exquisitely personal and intricate albums that tracked the heartbreak, angst, and existential technophilia accompanying Bianchi's move from Austin to California. Now back in Austin, he releases his final salvo as Her Space Holiday in an attempt to encompass the history of the project while looking decidedly forward, playing as much off the band arrangements of 2008's XOXO, Panda and the New Kid Revival as his early lap-pop stylings. There's a self-consciousness of closure throughout the album, from the opening line of "She tells me that time will heal all our wounds" ("Anything for Progress") to the struggled, uplifting string plucks of "Shonanoka," declaring, "I'm moving, I'm changing, I'm thinking, I'm growing ... rewriting my history." The arrangements tilt equally ambitious, often packing intense layers and midsong twists in the span of 3½-minute tunes. Quiet inevitably erupts into cathartic bursts on the earnestness of "The Hummingbirds" and dark gypsy lope of "The Candle Jumped Over the Spoon," unhinged moments leveling calm realizations, such as the calliope twirl and chorus of "Come on All You Soldiers." Her Space Holiday is a satisfying conclusion, leading with retrospective but still pressing forward on "Death of a Writer" ("I'm wide awake and I can finally see everything that's in front of me") and "In the Time It Takes for the Lights To Change," which declares, "Despite what you've done, you always have a choice to tighten up your course." 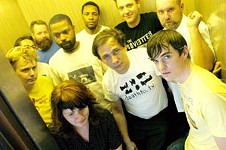