The gospel according to Scott H. Biram

Nietzsche in one hand and the Bible in the other, Scott H. Biram's raising Cain.

"Biram 4:44," he hollers to no one in particular, throwing both arms into the air. "Thou shall not understand me."

What began as a photo shoot at an empty lot in an East Austin housing development complex has turned into a sermon on the mount for his so-called First Church of the Ultimate Fanaticism. Roving neighbors rubberneck the scene, some stopping to ask questions about the roadside attraction.

Wearing Velcro shoes and a faded Black Flag shirt, he looks like a mad trucker after an overnight haul, a fitting depiction of the 37-year-old local, currently stranded on a wall of amplifiers with his 1959 Gibson hollow body guitar – cracked earth below, expansive blue sky above. Over the last decade, Biram has become the definitive one-man band, a lone bandit from old weird America wreaking havoc with torrid tales of drugs, murder, chickens, and ever-fleeting redemption.

Even the most iconic outlaws banded together in times of desperation: Butch Cassidy led the Hole in the Wall Gang, while Willie Nelson rode herd with Johnny Cash, Waylon Jennings, and Kris Kristofferson in the Highwaymen. Not Biram. He walks alone, accompanied only by his repute and legend, both stemming from his unlikely survival of a near-fatal car wreck in 2003.

Like Merle Haggard, Biram deals out misery and gin in equal measure, with a gritty immediacy that owes as much to 1930s chain gang recordings as the Misfits' gothic thrash. His latest, Bad Ingredients (see "Texas Platters," Sept. 30), pieces together a shattered portrait of darkness on the edge of town and at the bottom of a bottle.

"The power of Biram compels you," he concludes, repeating the line twice for effect.

The camera stops clicking. Biram quickly comes to and curls his lip into a knowing smile. Asked what his middle initial stands for, he just bristles.

At Donn's Bar-B-Q on FM 969, he's mild-mannered and clearly fatigued, the circles under his powder-blue eyes as telling as the odometer in his van parked out front. He speaks fondly of early blues influences handed down from his father (Lightnin' Hopkins, Muddy Waters, and Leadbelly), seeing Doc Watson at the Armadillo World Headquarters, and his rural upbringing in Prairie Lea outside Luling, where his grandfather served as the deacon of the local Baptist church for close to 50 years. His thick, country drawl and attention to detail make him a natural storyteller.

"I had this weird dream the week before my wreck," he says. "I was walking along the San Marcos River and stepping on all these Mormons that were on the sidewalk. Eventually I came to a priest, and he had these gel tabs. I said, 'Are those made of water?' He said, 'They're made of exceptional water.'

"Then I stole a Mormon's bicycle."

The night before the accident, March 24, 2003, Biram pulled over at the head of the San Marcos River. He cupped his hands in the water and drank.

"Sometimes I feel like the great power of the medicine river carried me through my brush with death."

There's no other explanation. An 18-wheeler struck his Dodge Dakota head-on at 75 mph, crushing the midsize vehicle into a tattered heap of scrap metal. After being pulled from the wreckage by the Jaws of Life, Biram was air-lifted to Brook Army Medical Center in San Antonio. He was bleeding internally and not expected to even make it to the hospital.

After 13 surgeries – 1½ feet of his intestine was removed and metal rods were inserted into in his broken arm and legs – Biram not only survived but cut the Rehabilitation Blues E.P. shortly after his release, a rough collection of traditionals and standards picked with redemptive urgency. Weeks later, Biram was wheeled onstage at the Continental Club, an IV still hanging off his arm.

"Physically, I've never recovered," he concedes. "I'm like one of those old cars you have to crank to start. If I ever need to run, I'm in trouble."

He takes a sip from his iced tea.

"It didn't necessarily bring me closer to God," Biram says of the experience. "I'm thankful for every day, but I stand in the same place I did before. I just have a little bit of a lean to me now."

"I read he stomped on a wet piece of cardboard," Biram nods.

After relocating to Austin, Biram self-released several lo-fi recordings, while his raucous live show fostered a loyal following of bikers, rednecks, and punks not seen locally since Don Walser opened for the Butthole Surfers. Then the accident happened.

"I was off stage mostly for seven months; that entire time I felt like I was falling behind," recalls Biram, who while still bedridden booked his first tour for the projected date he'd be able to walk again. "It made me more driven – maybe a little overdriven."

He's certainly made the most of borrowed time. Since signing to Bloodshot Records in 2004, Biram's issued four albums of twisted blues and insurgent country, each stronger than the last. His often bleak compositions possess a chilling authenticity born of catching a glimpse of that other side.

"I've battled with depression all my life," offers Biram. "There's a dark cloud there. Part is the knowing that all things pass. All my life I've been scared to lose my loved ones. I know it's inevitable, but it really haunts and bothers me.

"The other part is the not knowing. I'm an only child. I've got all these metal rods and plates in me. I already know I'm going to need knee replacement surgery. I get afraid that I'm going to get left alone with this broken body."

The mat to Biram's home in Southwest Austin isn't exactly welcoming, spelling out instead its owner's dark humor in bold capital letters: "GO AWAY."

"I don't really fit in the suburbs," shrugs Biram upon arrival.

For starters, there's a chicken coop in the backyard, tucked behind the shed, where four hens serve as a constant reminder of his small-town roots. Black-and-white family photos sit in the living room beside his grandmother's Singer sewing machine.

Biram purchased the home, along with his first touring van, with the settlement money from the accident. (He signed the mortgage the same day as his contract with Blood-shot, a deal that keeps him on the road 200 nights a year.) A string of voodoo skulls hangs across the parlor piano, and audio cables run through the walls of his two-bedroom home studio, where a dozen guitars compete for space with speakers and keyboards. 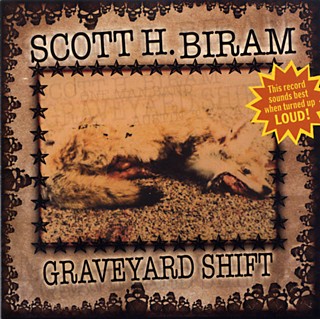 It's here at Hiram's Hell Hole – as credited on his releases – that Biram fosters his gnarly vision with complete sovereignty. He produces and performs most everything himself – guitars, Hammond B-3 organ, harmonica, and percussion via his homemade stomp board – with a few other credits thrown in for good measure: CB radio, loudspeaker, hambone, Bible thump, and the "SHB Gospel Choir," a layering of corn-fed voices modeled after his childhood memory of the Sweet Canaan Baptist Church.

"It makes me feel like I'm doing something with my life," he says of the solo endeavor. "It's a challenge. It's all on my shoulders."

Biram's mastered the art of imperfection in the studio. He cuts dozens of alternate versions of each song, sometimes tracking 300 different solos. His recordings are packed with subtle nuances – stereo panning, echoing voices, and fragments of distortion and found sound – that lend an eerie otherness. There are 45 different tracks, for example, at work in "Victory Song," a raunchy roadhouse gem that boogies at transistor frequencies.

"That's why it takes so long for me to put out records," he confesses.

His seventh LP, Bad Ingredients, was helmed between tours over a two-year span, a period informed by the end of a rocky long-term relationship and the loss of his dog, Ruby Lou. There's a greater sense of clarity and restraint to the album, as if Biram's trying to put his best foot forward in 13 different directions.

While neither clean nor sober, Biram's given up whiskey and is further sharpening his focus to promote the new release. He's already sold out an East Coast tour, landed a few tracks on the next season of Sons of Anarchy, and is closing in on a new publishing deal with Bucks Music Group.

"I had to decide if I was going to be the wildass and drive myself into the ground or if I was going to try and maintain some integrity in my music and keep going," adds Biram. "I want my music to be kept alive, to know that I wrote and recorded good enough songs that people will still give a shit a hundred years from now."

If Biram ever cut a crossroads deal, it would happen at Riley's Tavern in Hunter. Tucked off I-35, just past the railroad tracks and halfway between New Braunfels and San Marcos, the neon-lit pool hall was the first licensed bar opened in Texas after Prohibition.

Onstage, Biram matches the unflappable confidence of Bo Diddley with the show-business appeal of Flatt & Scruggs, cantankerous and slightly confrontational. He once got up after Kris Kristofferson at South by Southwest, reportedly yelling: "They said that was a hard act to follow. I'm a hard act to follow, motherfuckers!"

Tonight he's one man of many voices: reviving the Depression-era folk of Woody Guthrie's "Pastures of Plenty," yodeling Don Walser's golden "Rolling Stone From Texas," grunting blunt metallic trauma on "Church Babies," and when the time comes to change a broken guitar string, he multitasks with a stunning a cappella version of gospel standard "Go Down Ol' Hannah."

By his own account, Biram's set list changes like the Texas weather: If you don't like it, just stick around for a couple of minutes. Over the course of two straight hours, Biram cycles through a lifetime of phases and stages, from his early CB calling card "Truck Driver" through the depraved grit-blues of "Graveyard Shift," and what should've been his breakthrough from 2009's Something's Wrong/Lost Forever, "Still Drunk, Still Crazy, Still Blue."

The show proves an exercise in extremes, with the bruised plea of "Wildside" being answered by the vengeful furrowing of "Plow You Under." Biram plays like a man possessed, stomping with a vehemence, his eyes rolling back at times as his head twitches.

"You get sick, you get ill," he hollers near the end of the show, pointing purposefully northward. "You get hot, you get cold; you go cleanse yourself in the San Marcos River, that clear, 72-degree year-round sacred water."

The word of Biram. Amen.

Wicked retribution carried out with hellhound determination and demon electricity.

Skewered country-blues that finds Biram lamenting, "It's times like these I wish I had some times like those."

Heavy reckoning that boogies harder than that other little ol' band from Texas.

Brutal, bleary-eyed melancholy, staggering in its honesty and stretched for a county mile.

Instant standard in the Texas penitentiary blues canon – shackled, desolate, and heavier than a ball and chain.

Scott H. Biram brings out the ghosts at the Scoot Inn on Saturday, Oct. 29. 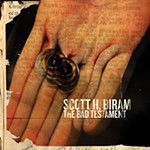