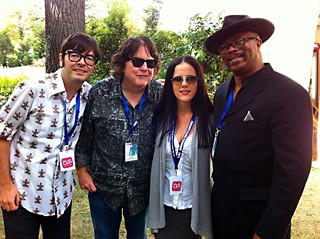 For the packed house at the Moody Theater on June 20, the evening was an Austin City Limits taping of Black Joe Lewis & the Honeybears. Backstage, the show doubled as a family reunion for Austin's Heavy Light Records.

After accompanying the local rock and soul upstarts onstage, the Rev. Gean West of gospel powerhouse the Relatives (see "Don't Let Me Fall," Oct. 1, 2010) greeted me behind the scenes with a sly grin and a big hug.

We first met over a plate of ribs at a funky barbecue joint in South Dallas three years ago, followed by an interview at his tiny brick church nearby. Writing liner notes for Heavy Light's Don't Let Me Fall, the Relatives' three-decades-in-the-making full-length debut, I came to know West well. A year later, the local imprint commissioned me to do liners for its next release, a reissue of Fantasia del Barrio, El Gusano's 1975 psychedelic trip from South Texas to Vietnam (see "Reissues," Jan. 21).

For co-owners Noel Waggener and Charisse Kelly, married roughly the same amount of time they've been collecting records together, 16 years, Heavy Light is a deeply personal endeavor. In 2001, Waggener founded Waxploitation! (now Soul Happening), dusty-fingered local DJs who fuel dance floors with rare funk 45s. Bonding with master of ceremonies Obatallah Hayter, the late Harlem-born pianist who rapped over records from his wheelchair, the pair had an epiphany.

"Through our time on the road collecting records, we've seen so much of the 20th century disappear," Waggener laments. "When we visit these old towns and go to the old city center, you see what it used to be. All of these old, beautiful buildings were abandoned after freeways were built. We felt that a lot of the regional music, especially of Texas, has been sort of kicked aside as well. We wanted to actualize it in the present day."

The result, Heavy Light Records, has so far amassed more than 4,000 recordings, including a sizeable chunk licensed from the heirs of San Antonio businessman E.J. Henke, who owned several small labels, including the Harlem, Satin, and Warrior imprints. Among the treasure buried in Heavy Light's stash are reels from early and unreleased Doug Sahm recordings and never-before-heard 1968 proto-funk from Mickey Foster, who later formed Mickey & the Soul Generation. There's also an embarrassing wealth of Chicano soul waiting to be compiled. Releases on 180-gram vinyl with meticulous remastering belie what Waggener and Kelly call a "kitchen table record label."

"We do it for us," Kelly explains. "We want these things to be a monument to these artists that haven't gotten what they deserve in the past. We see ourselves as caretakers of this art." The couple's endeavor has found success precisely because their livelihood doesn't depend on it. Kelly has sold houses in Austin as a real estate agent since 2005, while Waggener keeps the air conditioning on as a designer, having earned a Grammy nod on the ornately packaged Albert Ayler Holy Ghost box set on Revenant records (see Harvey Pekar's feature-length review, "Holy Ghost," Oct. 8, 2004). He was handpicked by Billy Corgan to create original artwork for several installments of the Smashing Pumpkins' 11-EP concept album Teargarden by Kaleidyscope and is busy designing the forthcoming deluxe box reissues of Pumpkins' classics Gish and Siamese Dream.

This summer the couple put everything on hold to globe-trot with the Relatives, several of whom had never flown, joining Black Joe Lewis for festival dates at Bonnaroo and in Australia. The Relatives spread their gospel to the Cognac Blues Passions festival in France, and then capped the trip by opening for Mavis Staples at the Lincoln Center for the Performing Arts in New York City and will soon begin recording new material with Spoon drummer/producer Jim Eno. Of course, choreographing a French choir and escorting septuagenarians through foreign lands was never exactly the plan.

"We're okay laying things down when we need to and picking it back up when we're ready," Kelly explains. "That's what makes it fun."

Good thing. The label's latest release, Kool & Together's Original Recordings 1970-77, hit shelves last month. The brothers Sanders of Victoria, Texas – Tyrone, Joe, and Charles Jr. – laid down some of the coldest funk and fuzzed-out psych-rock from Mexico to Motown from 1970 to 1977, all of it captured on a self-titled full-length debut to be vetted live at the Continental Club on Nov. 5.

"When they called us I was like, 'Yeah, right,'" says a still mystified Charles Sanders Jr. "Who wants to listen to this old stuff of ours? We're still scratching our heads."

A distribution deal with Seattle's Light in the Attic Records (and a reluctant agreement by Heavy Light to press CDs in addition to their usual vinyl) ensures Kool & Together will shine Heavy Light into all the right outlets. LITA co-owner Josh Wright says a shared aesthetic for the "vintage, old-school feel" makes the two labels natural partners, adding, "All of their releases have a great story behind them, and that's as much of a gift to share with the public as the music itself."

The son of El Gusano founder Eugenio Jaimez was in the audience this summer with his wife as ACL captured the urgent R&B of Black Joe Lewis. The Sanders family was there as well when the Honeybears covered their "Sittin' on a Red Hot Stove." After Lewis acknowledged Kool & Together, the Relatives strode onstage, resplendent in matching white suits, softening the roadhouse rock of "You Been Lyin'" with angelic vocal harmony. Waggener and Kelly soaked it all in.

"We realized that night we've got a family on our hands," Waggener declares. "I guarantee at some point there will be a bill of Kool & Together, the Relatives, and Black Joe Lewis, and it will be this unstoppable army of black rock.

"You take that lineup into a town, and nothing will be left standing."

A 7-inch slice of spiritual soul-jazz and disco-funk, the revelation here belonging to the flip side, where Franklin busts into an impromptu rap over the A-side instrumental. Recorded in 1981, "Star Bird II" is widely thought to be Texas' first rap record.

Led by the Rev. Gean and Tommy West, the Relatives' mix of funky break beats, psychedelic soul, and socially conscious gospel recorded between 1971 and 1975 is the gods' heavenly truth.

A meditation on the Vietnam War and the Chicano experience at home in South Texas, El Gusano's 1975 instrumental concept record is a strange trip indeed.

From the unlikely hub of Victoria, Texas, this family band of three brothers and others explored the boundaries of lo-fi funk and fuzzy psychedelic rock.

Charles Sanders Jr. of Kool & Together

Austin Chronicle: Were you surprised when Heavy Light contacted you wanting to put out your music?

Carl Sanders Jr.: I was real surprised because we had done this for a long time. My father had this huge dream back in the day. One night, the song "I Want You Back" by the Jackson 5 came on. After that, my two brothers and I decided to start a group. We started messing around. My dad came home from work and heard us, and he ran with it. Around two or three weeks later, I had a guitar and a small amp, my brother Joe had a drum kit, and my dad had bought my brother Tyrone bongos. From there it took off. We were playing cover music, a lot of James Brown stuff. It's so funny because we played a talent show in San Antonio with a lot of rock bands, but we were the only black band playing James Brown and stuff like that. We got a good response. 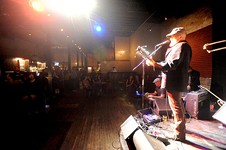