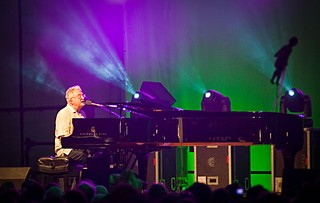 
Randy Newman wasn't the oldest performer at ACL. Mavis Staples probably takes that honor, but he was surely its most accomplished songwriter. The overflow crowd in the tent wasn't just geezerville either: Thanks to his recent work in film, the twentysomething set showed their love as well. Everyone not in the path of Social Distortion's sonic thump nearby walked away mighty pleased as Newman covered all the cornerstones of his career, from "Mama Told Me (Not To Come)" to the title track to 2008's Harps And Angels, with "You Can Leave Your Hat On" and "Dixie Flyer" in between. Like his latest Songbook collections, it was just Newman all froggy-voiced at the piano, wryly observing the never-ending spectacle of life in America. He wasn't above poking fun at himself and other performers of his age group with "I'm Dead (But I Don't Know It)," heartily accompanied by the audience. An encore of "You've Got a Friend in Me" left more than a few misty-eyed before they reentered the dusky carnival winding down around them. 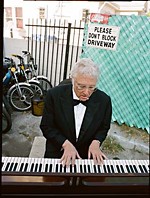