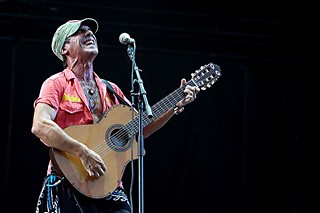 
"¿Que paso, mi gente?" yelled Manu Chao, bounding onto the massive AMD stage at sunset Sunday. "Ya llego!" It had arrived, all right – in the form of four multinational musicians who put on a punk rock master class not seen since the Clash. Where the Clash integrated the UK's love of reggae into its "Revolution Rock," the French/Spanish/Arabic core of Manu Chao's quartet not only reverses those inputs, taking reggae punk instead of vice versa, it does so at a soccer-stadium scale. Opener "Mister Bobby," as in Marley, summed it up in a song, wafting a syncopated raga before devolving into a full-on metallic thrash. Like Joe Strummer, Mick Jones, and Paul Simonon, the frontline of Chao wielding an acoustic guitar, stage sergeant at arms and bassist Jean-Michel Dercourt, and guitarist Madjid Fahem stepped forward and back in unison, drummer Philippe Teboul of Chao's seminal punk rock band Mano Negra singing harmonies and pounding a Caribbean mosh. Chao staples "Clandestino," "La Primavera," and Mano Negra's "King of Bongo" all rose and fell in a soup of chants, shouts, and Marley-esque "whoa-yo-yo-yo"s. When Chao beat the mic against his chest in a show of solidarity and corazón, he drew blood. Not even Iggy Pop does that.

Manu Chao
Greetings from Austin, circa 2008