"The real reason I was lo-fi before was really just because that's what I could afford," admits Vile. "Making a record the real way is ideal, but that whole mentality of nuance and recording some things that may be mistakes gives it character, too, like early Rolling Stones or John Fahey or American Primitive music or Charley Patton. It's all so raw, you don't want to try to clean it up so much that it loses its character."

That approach has served the 31-year-old Philadelphia songwriter well, projecting an authenticity to his music that's garnered respect and praise from Thurston Moore and J Mascis, the latter inviting Vile into the studio to play guitar on his latest, Several Shades of Why.

"It's totally incredible, and I was totally nervous doing it, but he was completely laid-back," laughs Vile. "I knew he was a fan of my music, but when he I asked I couldn't believe it. Obviously I gravitated toward that kind of thing, whether it was passing along CD-R's to Thurston Moore or covering 'Dim Stars' on the last record, so to get their recognition is priceless." 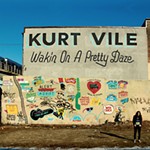