Sixteen-year-old fiddler Ruby Jane Smith's to-do list: get driver's license, study for SATs, perform in Asleep at the Wheel play A Ride With Bob, and play Lollapalooza. What did you do this summer? Ruby Jane's self-released 2010 EP, Feels Like Home, reveals a drift away from bluegrass and into a slightly more electrified direction, but that baby Billie Holiday voice is the true star of the show. – Melanie Haupt

The founding core of hardcore L.A. punks the Bronx return with their second bajo sexto offshoot LP, Mariachi El Bronx II (ATO). Matt Caughthran croons, guitarist Joby J. Ford takes up accordion in addition to the aforementioned Mexican bass, and drummer Jorma Vik bangs a cajón. As a horn-braised sevenpiece, MAB could be the white-boy equivalent to our own Los Lonely Boys, without the Strat solos. – Raoul Hernandez

AWOLNation scorched out of the gates with last year's debut EP, Back From Earth, presenting Aaron Bruno unloading scathing, scarred beats in a furious rave of aggressive electro-pulses. This year's full-length, Megalithic Symphony, drives more smoothly but still breaks into epic surges, and AWOLNation will burn it down live as Bruno brings a full band into action to rev up a dance floor and throw down a mosh pit. – Doug Freeman 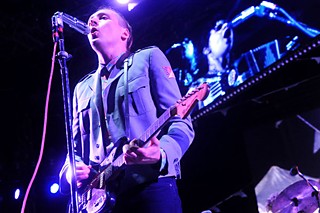 Arcade Fire at the Backyard, May 3 (Photo by John Anderson)

The Austin Police Department had to call in the riot squad for Death From Above 1979's unannounced reunion at the Beauty Bar during South by Southwest in March. The Canadian duo's lone album, 2004's You're a Woman, I'm a Machine, remains one of the decade's sleaziest and sexiest Saturday night rock albums. There's no talk of new recordings yet. – Austin Powell

Stubb's Gospel Brunch becomes the Vista Equity tent on Sunday beginning at noon with Austin's venerable Bells of Joy (noon-1pm). Once called the Starlight Singers, they became the Bells of Joy in 1951, making this their 60th year of a cappella Texas gospel, and when they sing "Let's Talk About Jesus," they mean it. Voted Gospel Recording Artist of the Year by the Texas Gospel Announcers Guild, the Durdens (1:30-2:30pm) also call Austin home, as they have for 30 years. The contemporary flair to their gospel was highlighted on the recent New Day. The Lee Boys (3-4pm) raise gospel's roof with their sacred steel sound. It's a style the Florida-based family band serves up in bluesy helpings and tasty beats so good for the soul. – Margaret Moser

No Helplessness Blues here. The Seattle sextet tramps the world in support of its extra-ordinary sophomore effort, released in May on Sub Pop and gracing Stubb's with a sold-out spot of precipitation shortly thereafter. Where the group's eponymous debut flirted beautifully with 1960-inspired chamber pop, Blues indulges frontman Robin Pecknold's circumspection amid a folksy urban-pastoral backdrop. – Melanie Haupt

Empire of the Sun

Had Empire of the Sun's 2008 debut, Walking on a Dream, arrived stateside before MGMT's Oracular Spectacular, the Australian duo – Luke Steele of Sleepy Jackson and Pnau's Nick Littlemore – would be a house-hold name. Hypnotic and fantastical, the album notched seven Australian Recording Industry Association Awards behind the spaced-out glam-pop and the disco-light of break-through singles "We Are the People," "Standing on the Shore," and "Walking on a Dream." – Austin Powell

Montreal's Arcade Fire jumped to headliner status with the Grammy's undisputed 2010 Album of the Year, The Suburbs, a dramatic concept album about the struggle for identity in a tract housing culture. Torn between childhood reverie and adult remorse, the CD's just been reissued in an expanded edition that includes a pair of bonus tracks ("Speaking in Tongues" guesting its author David Byrne) and a DVD of the band's locally shot short film by director Spike Jonze, "Scenes From the Suburbs." – Austin Powell