Greetings from Austin, circa 2008 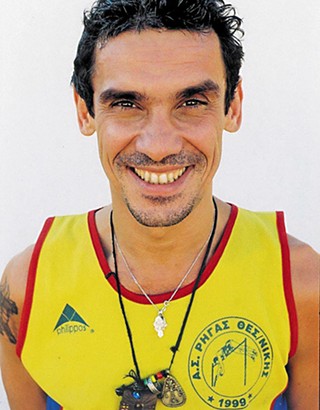 "Bueno, we were plenty busy with what we had to," nodded Chao on his way out of town, his rapid-fire Spanish as energetic as his band's folk-punk. "But we got to know parts of the town, the river, swimming holes. Between TV, Stubb's, and the festival, we didn't have much time.

"But we got a supergood feeling from all three. If I had to pick my favorite U.S. cities, it'd be New York, Austin, and San Francisco."

That was appropriate coming from the musical sprite, especially with Chao concluding his Zilker Park set singing Spanish standard "Volver."

"I have not lied," he acknowledged. "I will return."

"That song's so pretty, 'Volver.' And we do standards. Not in our big shows, because there's always time constraints, but when we play bars in Europe, our repertoire has a lot of standards, boleros. You have to know those songs."

So punk rock only for big shows?

"We look for that energy at our shows, the big impact. And really, what we're doing anyway is electrifying more traditional sounds. That's what I've always done, not just with this band, but going back to Mano Negra. What we do isn't that different than what Mano Negra did. It's a question of energy. Or maybe stage fright," Chao laughed.

Does he ever do songs from Patchanka?

"We haven't done 'La Ventura' here in the States, but we play it in France. That's one of those songs that's stayed with me through the years, so we still play it in bars a lot. On our last tour of France, yeah, we did that song."

Mexican standards, his Parisian punk past – any American staples he'd like to sing?

"Something by Hank Williams," he said in his heavy accent. "Oof, so many songs. I'd sing one by Lou Reed, 'Pale Blue Eyes' – or rather the Velvet Underground. I love that song. There's thousands. That question is infinite."