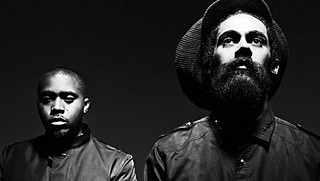 
The venom Nas spits on 2006's Hip Hop Is Dead and 2008's Nas is part of a distant past. These days the Queensbridge, N.Y., native flows on the positive tip.

"It began in the summertime when the weather started to get good," the 38-year-old rapper says of his mindset. "I thought about people who were fighting for their lives and people who were starving in other countries. We let the weight of the world pile on us and bring us down and don't pay attention to the good, the small things. The small things are really big things; they're the things God gave us. I started to really appreciate those things in life."

Nas is exerting such positivity that he's calling his upcoming album, set for release later this year, Life Is Good. Nas says he chose the title while on tour with Damian Marley this summer, a tour at which he'd remind his backstage company every night, "Life is good."

In fact, the Marley scion has played a major role in changing Nas' ways. Most recently, the former encouraged the latter to team up with the George Harrison Fund in raising money for UNICEF to help children in Africa.

"Making [Distant Relatives] made me look more into ways that I could help people," says Nas. "The fact that I have this opportunity ... I come from the street, and here I am able to do something about people who may be hungry or just people who are down. I can do something and be a part of something that George Harrison started. We're here after he's gone to carry that torch and be a part of the fire that he started."